Wuhan doctors save a critically ill coronavirus patient, 65, by giving him a double-lung transplant after the killer infection caused irreversible damage to his organs

Doctors in China have pulled a 65-year-old coronavirus patient from the brink of death by giving him a double-lung transplant.

The critically ill man, named as Cui An, tested positive for COVID-19 in early February and had been hooked to a life-support machine for more than two months when surgeons performed the challenging surgery, according to a hospital in Wuhan.

Medics said the transplant was the only way to save Mr Cui because the killer infection had caused irreversible damage to his lungs, leaving him unable to breathe on his own. 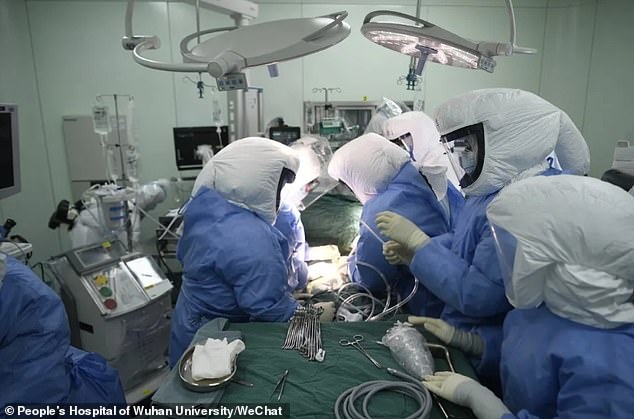 Medics are pictured wearing goggles, full-body protective suits and head shields during the double-lung transplant on April 20 at People’s Hospital of Wuhan University in Wuhan, China

The life-saving operation took place on April 20 in People’s Hospital of Wuhan University and involved more than 20 medical workers, the hospital said.

The medics worn goggles, full-body protective suits and head shields throughout the procedure, which lasted for six hours.

The surgery was carried out in a negative-pressure operating theatre to limit the spread of the virus.

Dr Lin Huiqing, the director of the department of thoracic surgery of the hospital, called the operation ‘highly risky’.

She said all medics had to wear sound-proof headgears which provided them with positive pressure.

She explained: ‘After putting on the positive-pressure head covers, the medical workers would not be able to use language to communicate during the surgery, and had to rely on their experience and mutual understanding to complete the operation.’ 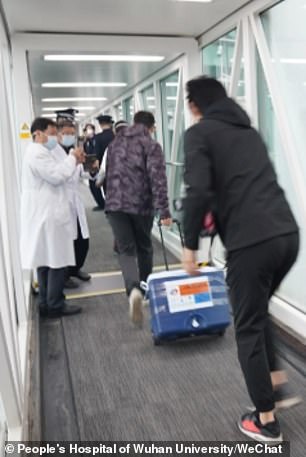 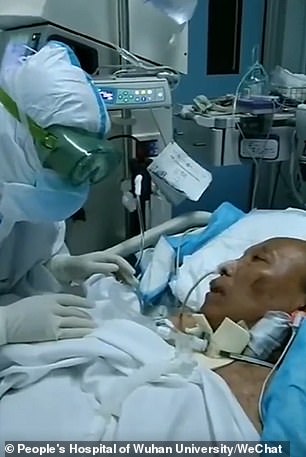 The patient, Cui An (right), was able to undergo the operation after doctors secured a pair of lungs on April 20 from a deceased donor. The organs were flown to Wuhan (left) on April 20 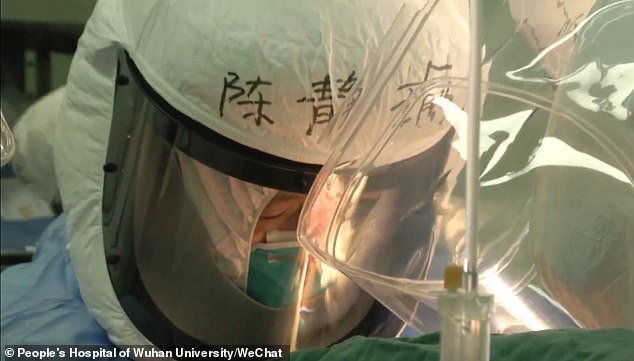 The procedure was carried out by Prof Chen Jingyu (pictured), the leader of the national expert team of lung transplant as well as medics from various departments of People’s Hospital

The patient, Mr Cui, first developed high fevers on January 23 and was diagnosed with COVID-19 on February 7.

His health deteriorated on February 17, and Doctors at Wuhan’s Red Cross Hospital – where he was receiving treatment – hooked him to a machine called ECMO a day later.

ECMO is a drastic life-support procedure which replaces the function of the heart and lungs by pumping oxygen into the blood outside the body.

He was transferred to People’s Hospital on March 18 when the hospital was assigned by the government to take over all COVID-19 patients from Red Cross Hospital.

Doctors put him into the ICU on April 6 after his condition failed to improve and he still had to reply to ECMO to survive. 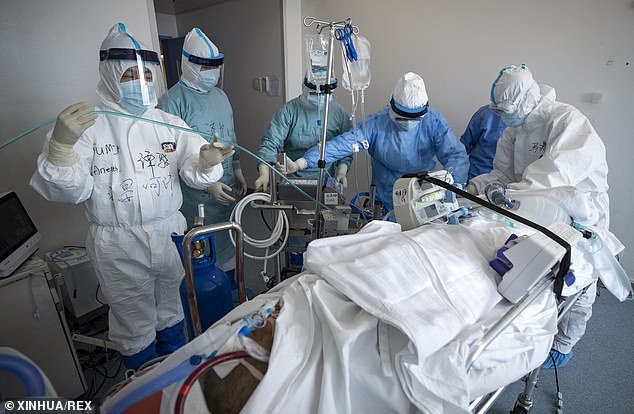 During the intensive care, he tested negative in multiple nucleic acid tests, which means the coronavirus was no longer present in his body.

‘However, because the novel coronavirus had caused his two lungs to sustain irreversible pulmonary fibrosis and respiratory failure, he required constant assistance of a ventilator and ECMO and was at death’s door,’ the hospital said in a social media release.

As a critically ill COVID-19 patient, doctors reported Mr Cui’s situation to the country’s coronavirus task force, and experts deemed that a double-lung transplant was the best way to save him.

Doctors secured a pair of lungs on April 20 from a deceased donor who was a match to Mr Cui. The organs were flown from the southern province of Yunnan, where the donor was, to Wuhan on the same day.

The transplant took place on the same evening. It was performed by Prof Chen Jingyu, the leader of the national expert team of lung transplant as well as medics from various departments of People’s Hospital. 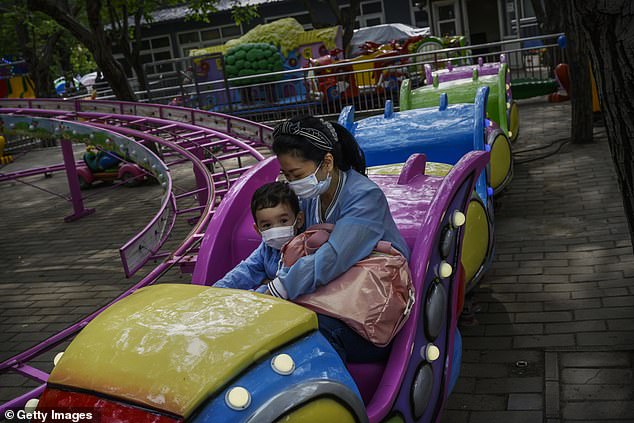 The coronavirus has killed 4,633 people and infected 82,885 in China, according to official figures. Pictured, a woman and a boy enjoy a ride while wearing masks in Beijing on May 4

Doctors unhooked him from the ECMO two days after the surgery and Mr Cui regained his conscious on April 24.

His overall infection subdued on April 20, and he was able to do simple movements with his hands and feet.

He still needed to use a ventilator to help him breathe most of the day because his muscles did not have enough strength yet to support his new lungs.

Lung transplants are not a conventional method to treat the novel coronavirus, but the only way so far to cure those with terminal changes in their lungs, said Jiao Yahui, a specialist from China’s National Health Commission.

But Jiao pointed out that doctors should only conduct the transplant after eliminating the coronavirus in the patient.

‘[Otherwise] even if you give them a new lung, it will still be infected and damaged,’ she stressed.

According to Deputy Professor Li Guang from the hospital’s ICU department, Mr Cui was slowly regaining his physical abilities. Still, it would take him a long time to recover from the operation entirely, he said.