IT might make lockdown a little easier, but a freak heat wave this week could spell misery for hay fever sufferers.

Temperatures are set to hit 34C tomorrow with an extreme "heat alert" in place for the whole of England. 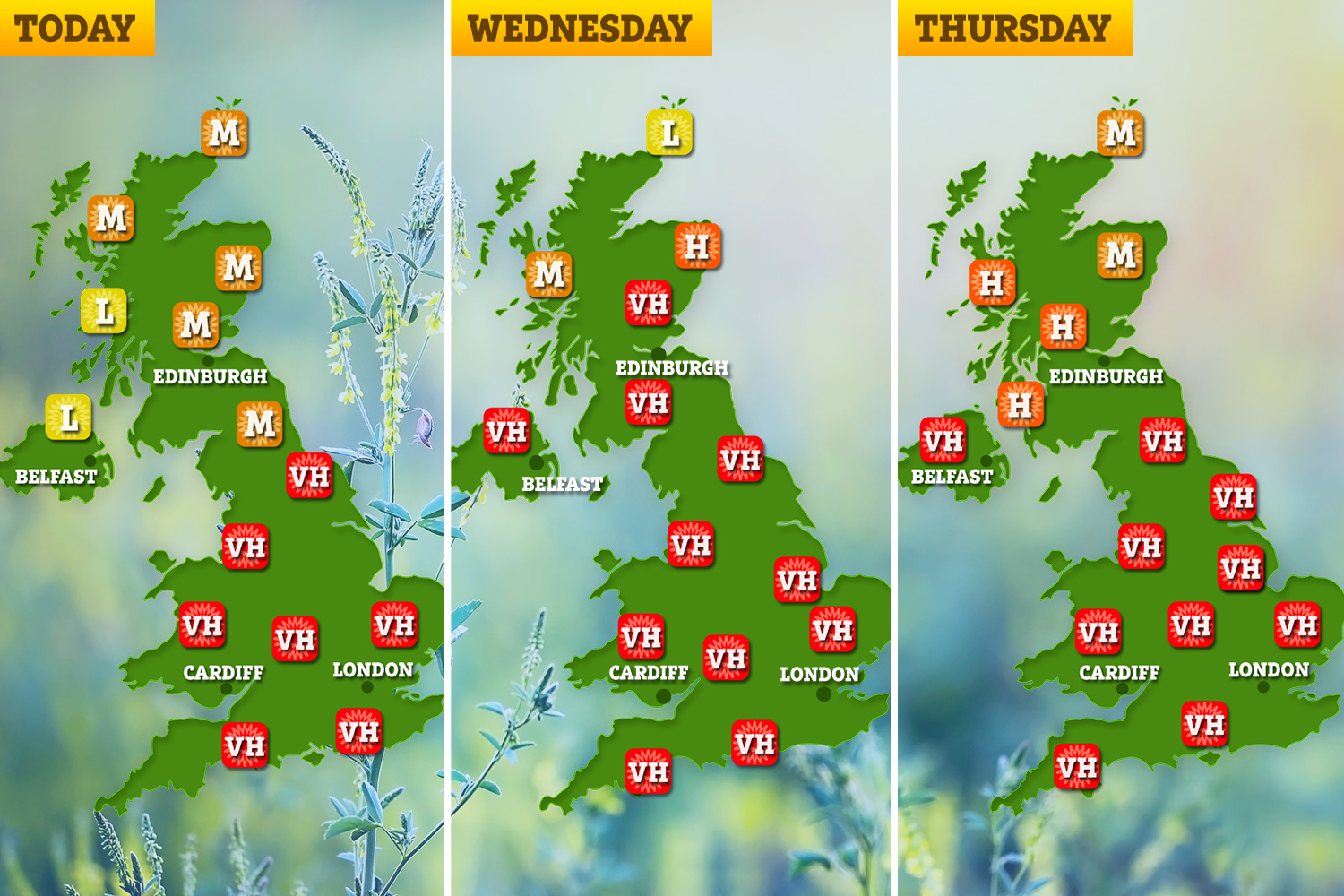 Experts warn the scorching heat could trigger a "pollen explosion" – making it the worst week for hay fever sufferers in years.

Airborne allergens expert and creator of HayMax allergen barrier balms, Max Wiseberg, said: “Once again we’ve just had lots of rain during the peak pollen season, which has fed the grass beautifully.

"And this can only mean one thing – yet another massive explosion of pollen.

The Met Office predicts pollen levels will be "very high" for the majority of the country over the next five days.

Forecasters say it's particularly bad news for those allergic to grass pollen, but nettle and fungal spores will also pose a risk.

Experts have previously suggested that hay fever would be worse this year due to the coronavirus lockdown.

That's because fewer cars one the roads has seen a drop in pollution – which can act as a barrier to pollen particles – meaning more are able to circulate.

These usually contain either Cetirizine or Loratadine. If one doesn’t work for you, you can try the other one.

Some contain chlorphenamine and these are more liable to make you drowsy. All antihistamines can make you drowsy and it is illegal to drive if they do. It is also dangerous to operate machinery.

Again, look for the active ingredients – beclomethasone, budesonide, fluticasone or mometasone – own brand versions can be cheaper.

Organic drug-free allergen barrier balms such as HayMax are applied to the nostrils and bones of the eyes in the morning and throughout the day.

They are used to stop allergens from entering the body through the nose.

They are especially useful as they can be used immediately, together with other hay fever products and are suitable for children and pregnant and breastfeeding women.”

Taking products that can help boost your immune system can be useful.

Bee Prepared Daily Defence Immune Support is an immune boosting wellness formula for adults and children that contains all natural ingredients which have a history of benefits and clinically researched actions which help support the immune system.

Please note that this product isn’t suitable for pregnant or breastfeeding mums.

Acupressure is a non-invasive form of acupuncture, achieved by applying physical pressure of hands, elbows, feet or devices to the same acupuncture points.

It is used in a wide variety of conditions including hay fever. The Qu-Chi Hay Fever Band uses acupressure to target key pressure points on the body associated with allergy symptoms.

The band is worn on one of these pressure points, the elbow. Adult and child sizes are available. This product is not suitable for pregnant and breast-feeding mums.

Dr Hilary Jones previously warned that a "pollen bomb" would usually be blocked by pollution.

Speaking on Good Morning Britain, he said: "When you have less particulate matter in the atmosphere and it brings it down to earth you have less circulating antigens getting into your eyes and your nose."

Dr Sarah Jarvis told The Sun: "Part of the problem with hay fever is it depends on when your symptoms start, pollen counts tend to be higher during the day.

"So we normally say if you are going to go out, go out early in the morning or late in the evening as pollen counts tend to be lower then."

It comes as the UK is set for record-breaking temperatures this week – prompting experts to issue a Level 2 "heat health" warning for tomorrow.

The rare alert is triggered when the risk is 60 per cent or above for threshold temperatures being reached in one or more regions on at least two consecutive days and the intervening night.

“This is an important stage for social and healthcare services who will be working to ensure readiness and swift action to reduce harm from a potential heatwave,” the Met Office said.

It is working with Public Health England to help healthcare services prepare for periods of “extreme temperature”.