This is the moment a wild fight broke out at an Arkansas steakhouse after two customers were accused of ignoring social distancing.

Seth Crews, who filmed the brawl and whose brother can be seen trying to break up the fight, said it all started when one woman accused another of sitting too close.

Staff at the Little Rock eatery said the same woman – who can be seen standing up in the video without a mask on – was deliberately coughing on others. 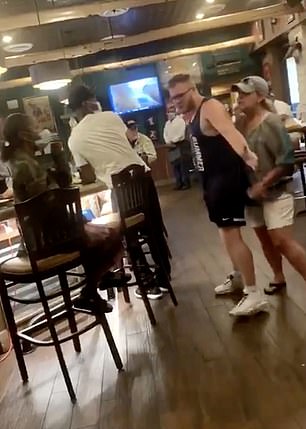 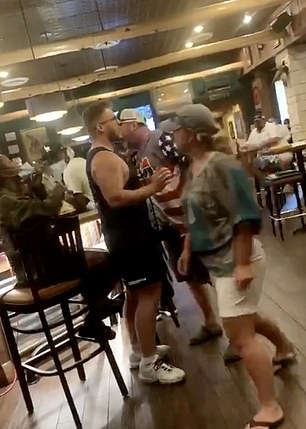 This is the moment a wild brawl erupted in an Arkansas steakhouse after two women (left) got into an argument about coughing and social distance, before a man wearing a USA shirt (right) came over and escalated the row

As the video starts, the accuser – who can be seen sitting down wearing a mask – can be heard saying ‘you got to move, you got to be six feet away from me’.

The two can be heard arguing back and forth, with the mask-wearing woman adding at one point ‘of course I’m yelling, you’re getting spit on me.’

The altercation then takes a drastic turn after a man wearing a ‘USA’ shirt walks over and gets involved.

At first he begins yelling at the seated woman, but quickly turns his attention to a man who is stood at the table with his back turned.

The two appear to swap words, though it is not clear what is being said.

Crews, speaking to local station KARK, said the man in the shirt then began pushing the other man – the boyfriend of the mask-wearing woman – in the back. 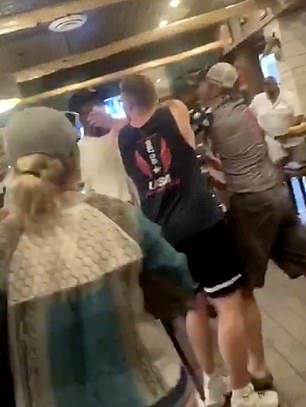 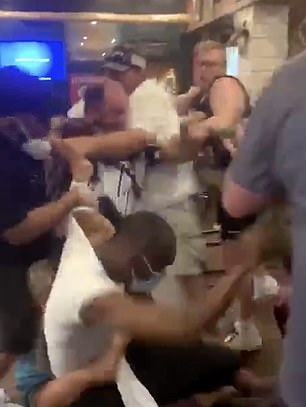 The man in the shirt can be seen saying something to another man who has his back turned (left), before he grabs a beer bottle and smashes it over the man’s head, sparking a fight (right)

The footage does not clearly show a push, though at one point before turning around the boyfriend appears to lurch a little – as if shoved.

As he turns he reaches for a glass bottle on the table, and a moment later brings it down on the other man’s head, sparking the fight.

Other customers then come running over in an attempt to separate the two men, as the mask-wearing woman can be seen hitting him in the head.

The scene descends into chaos as the footage ends.

Police were called and took statements from those involved including restaurant staff, though KARK says nobody has so-far pressed charges.

The steakhouse refused to comment on what their social distancing guidelines, and whether they were breached. 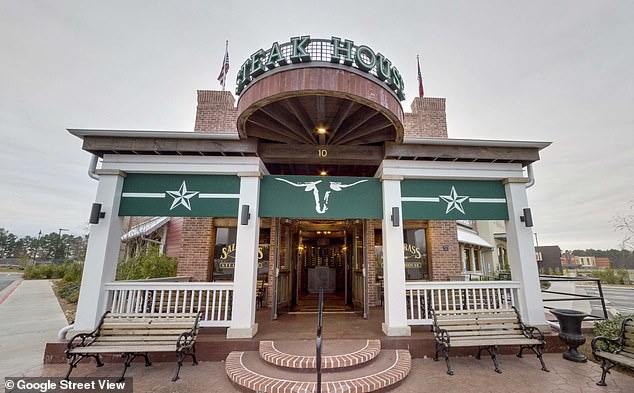 Police were called to the steakhouse, in Little Rock, following the fight on Saturday – but say that so far nobody is pressing charges

Crews added: ‘I think if just someone is telling you to stay away from them, you probably shouldn’t get near them.

‘And maybe if you don’t want to get Coronavirus, don’t go to a restaurant.’

The US is currently seeing a wave of coronavirus infections, particularly in southern states and California, as governors attempt to ease out of lockdown.

Daily infections have now topped 40,000 per day, with disease expert Anthony Facui warning they may soon be over 100,000 per day.

‘Congregation at a bar, inside, is bad news. We really got to stop that right now,’ he said.

‘I think we need to emphasize the responsibility that we have both as individuals and as part of a societal effort to end the epidemic that we all have to play a part in that.’