Sir Chris Whitty tells NHS medics they have a ‘professional responsibility’ to get vaccinated against Covid – as No10 prepares to axe controversial ‘no jab, no job’ rule

Sir Chris Whitty has written an open letter to NHS medics to tell them they have a ‘professional responsibility’ to get vaccinated against Covid.

Sajid Javid last week performed a last-minute U-turn on the controversial ‘no jab, no job’ policy for health workers over fears it would leave hospitals short staffed.

Up to 80,000 unjabbed workers faced being fired because of the rule, which would have meant they needed two doses by April 1 to keep their job.

Ministers reversed course but continued to insist it was the duty of staff to get a jab, with Boris Johnson last week saying it was their ‘professional responsibility to get vaccinated’.

Sir Chris, England’s chief medical officer, has now publicised his letter to colleagues urging them to take up the offer of a jab to protect their patients.

He wrote ‘questions of professional responsibility and legal mandation are separate’, arguing the public expect staff caring for their vulnerable relatives to do everything in their power to avoid passing on the virus.

While admitting jabs do not provide ‘absolute’ protection against infection, he said they do minimise reduce the risk, particularly after a booster dose. 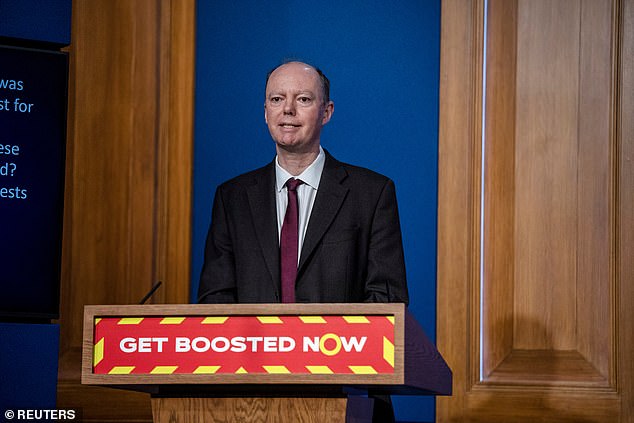 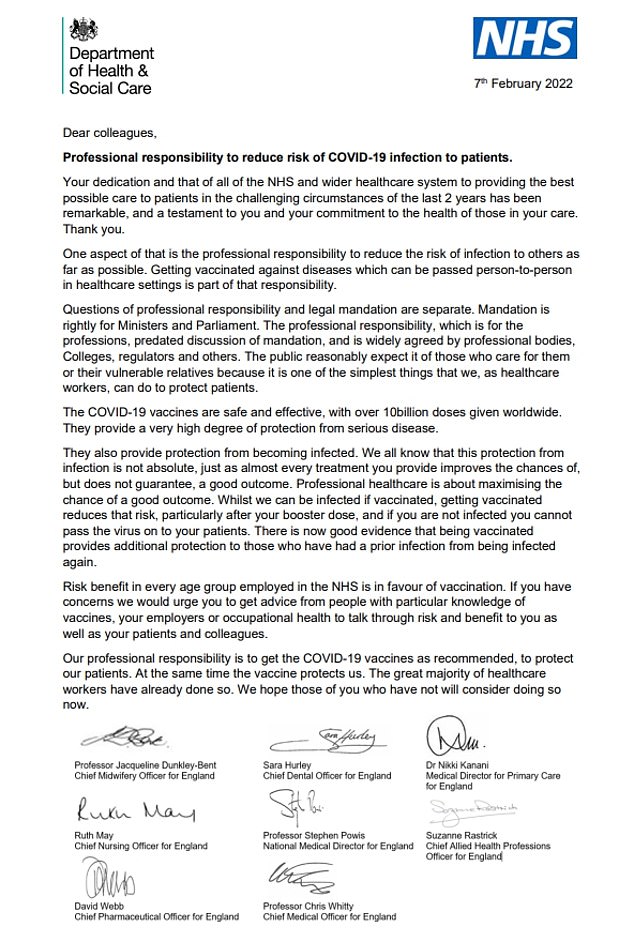 He said ‘questions of professional responsibility and legal mandation are separate’, arguing the public expect staff caring for vulnerable relatives to do everything in their power to avoid passing on the virus 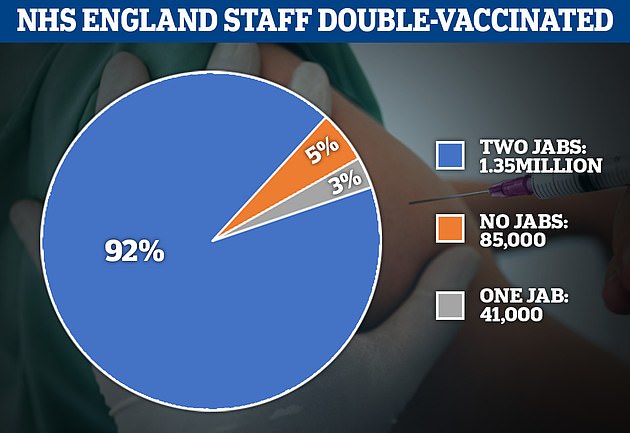 Graph shows: The proportion of NHS England staff that are double-vaccinated as of 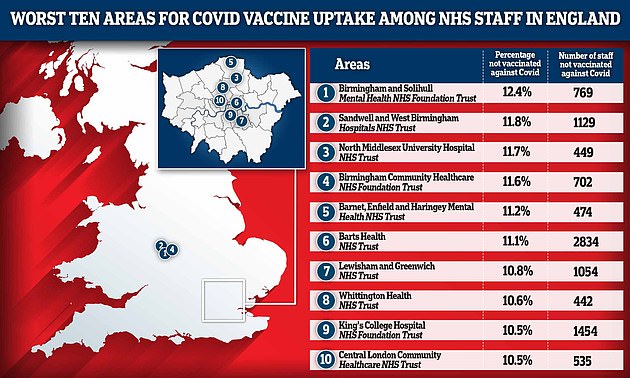 Government dashboard data revealed another 57,623 infections were recorded over the last 24 hours, down 38 per cent on last Monday. It marked the sixth day in a row cases have fallen week-on-week.

Another 45 deaths were also registered, a drop of 10 per cent in a week and the lowest daily tally in a month. But fatalities tend to be artificially lower on Mondays because of weekend reporting lags.

Latest hospitalisation statistics for England show admissions are down almost 20 per cent in a week, with 1,077 Covid patients entering hospitals across the country on February 5. An updated UK-wide figure will be released later in the week.

It came as Boris Johnson today sought to address dismal waiting times in England by setting a ‘new’ target for three-quarters of suspected cancer patients to be diagnosed or have the disease ruled out within 28 days.

During a visit to the Kent Oncology Centre at Maidstone Hospital, Mr Johnson said: ‘We want the vast majority of people who think they may have cancer to have a diagnosis either confirming they do or they don’t have cancer within 28 days — we want three in four to have that.’

He revealed the target in the wake of an analysis showing waiting times for cancer referrals and treatments were already at record highs in England, with half a million set to miss the crucial two-week referral target.

Writing in the letter, Sir Chris said: ‘Our professional responsibility is to get the Covid vaccines as recommended, to protect our patients.

‘At the same time the vaccine protects us. The great majority of healthcare workers have already done so.

‘We hope those of you who have not will consider doing so now.’

Sir Chris said discussions around responsibility came before those about compulsory jabs, with all ‘professional bodies, Colleges [and] regulators’ agreeing medical staff have a duty to get vaccinated.

He said: ‘The public reasonably expect it of those who care for them or their vulnerable relatives because it is one of the simplest things that we, as healthcare workers, can do to protect patients.’

Ministers were slammed for undermining public confidence in the vaccine when they made the move to drop the mandate last week.

Health leaders warned that it risked sending a message that vaccines are no longer important — potentially hitting uptake among the wider population.

When confirming the widely-anticipated reversal, the Health Secretary claimed it would only be ditched pending a consultation.

No10 last week admitted the discussions will not be completed for at least another 14 days, and hinted it could take as long as three weeks — two-and-a-half weeks from now.

Carers have already been hit by the same requirement, with the rules kicking in for the sector in November. Around 40,000 unjabbed workers were effectively sacked overnight.

But Mr Javid’s intention is to also scrap the mandate for social care workers, opening the door for thousands to get their jobs back.

The Prime Minister’s official spokesperson said NHS trusts had been advised that unvaccinated staff should not lose their jobs for failing to receive their first jab in the coming weeks.

But asked in the House of Commons whether he would confirm ‘unequivocally’ the reversal would go ahead, Mr Johnson said: ‘I want to stress that vaccines remain our best line of defence.

‘I do think that NHS staff and all those who work in the care sector have a professional responsibility to get vaccinated.

‘But given the difference between Omicron and Delta, it is right that we revisit the balance of risk and opportunities.

‘The Health Secretary has said we will launch a consultation and subject to the responses and the will of this house, the Government will review the regulations.’