The Australian Defence Force must have been exchanging tactical notes with Victoria Police these last five years. From the same playbook, they have both engaged in appalling and ultimately futile attempts to disguise their mess and blame others for their cultural failings.

Some – many – members of the elite SAS on service in Afghanistan stand accused of war crimes. Some – many – members of elite squads in Victoria Police are accused of perverting the course of justice. For years the military has attempted a cover-up, prosecuted whistleblowers and tried to gag the media. For years, the police have attempted a cover-up, hounded whistleblowers and tried to gag the media. 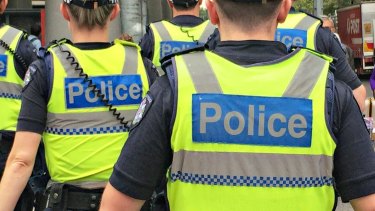 Victoria Police has been criticised for operational failings in relation to the Bourke Street tragedy.Credit:Paul Rovere

Each is as bad as the other in its own way. Each has fallen into the error of fostering an internal culture of entitlement and immunity. No matter what, they rally around, blindly back their mates and shout down and shut down any dissent.

No person in power must ever think that they are above the law.

This week's findings by the Coroner of the operational failings on the Bourke Street tragedy give little reassurance to the bereaved. I did not sit through the entirety of the inquest and always counsel against criticism of any proceedings on the strength of just a few snippets gleaned from the media. It is clear though from the evidence that there were multiple opportunities for the perpetrator – whose name I will not write – to be safely arrested and for the killings to be prevented, but those officers involved did not do so, for reasons they and their superiors now have to live with.

But what of the attempts by Police Command to shift responsibility and deflect the searing critique that surely is deserved? Their litigious combative attitude to the inquiry matches their attitude to the entire Gobbo saga, the report of which is due on November 30. The Royal Commissioner could borrow entire slabs from the SAS atrocities report and simply “cut and paste” into her observations of the way Victoria Police have behaved.

The military – and their political masters – have fought [!] to keep their alleged atrocities secret for years. Victoria Police have done exactly the same thing. Both have had blank cheques written by their political masters to enable these pointless but phenomenally expensive efforts. Millions of dollars have been drained from their primary mission – to keep us safe here and abroad.

Journalists and whistleblowers have been monstered by Federal Police with stage-managed theatrical raids on workplaces and homes justified as being “in the national interest”. In Victoria, media attempts to get to the truth about the growing list of scandals are stone-walled and rebuffed. Clearly in the eyes of some people at the top in both hierarchical organisations, by some twisted logic, we are better served by hounding and covering up instead of prosecuting those accused of doing wrong.

There are parallels to the ongoing and extensive court proceedings in place in relation to the bugging of the Timorese embassy during the negotiations over oil and gas in the Timor Sea. There are court cases on foot right now where brave people are being hounded for doing the right thing while those who have done the wrong thing are untroubled by the impact of the law. Totally back to front.

And what of Kerry Stokes? The billionaire owns Channel Seven as well as newspapers in Western Australia and is on the board of the National War Memorial in Canberra. It is now on the public record that he is lending money to an ex-soldier now a senior executive in his company who has sued this newspaper, claiming defamation over war crimes allegations. Is it not odd that a media proprietor campaigns for free speech and the importance of investigative journalism as a check on power on one hand but is with the other hand underwriting a court case to suppress investigative journalism that embarrasses an employee?

In this same week, we see James Packer's Crown arguing that it ought be allowed to open a new casino in Sydney while covering up money laundering through their casino in Melbourne. Also this week the federal government argued that the urgent recommendations of the Hayne royal commission into banking and financial skull-duggery need to be diluted because of COVID.

Until we repair some of the tattered regulatory infrastructure in Australia and invest in anti-corruption bodies federal and state that are thorough and independent, until we put a check on abuse of power and the rampant misdirection of public money being diverted to try to protect individual reputations instead of the public interest, we will never defeat the toxic self-reinforcing sense of elite entitlement among some people in power that has led to these deep and troubled waters.

Jon Faine is a former presenter on ABC Radio Melbourne.