Singapore: Bali has not given up hope of welcoming back arrivals from Australia before the end of the year as it seeks to reopen to foreign tourists next month.

The province’s deputy governor Tjokorda Oka Artha Ardhana Sukawati, known as Cok Ace, told The Sydney Morning Herald and The Age Bali was ready to reboot a tourism industry battered by the pandemic and will do so within weeks if given final approval by the Indonesian government. 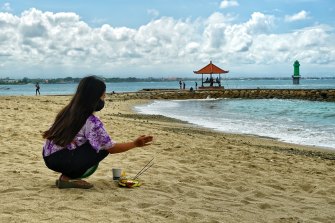 Sanur beach is a popular spot within one of the green zones in Bali.Credit:Amilia Rosa

Their plans are unfolding just as Phuket in Thailand readies to accept vaccinated international visitors, who will be made to wear location-tracking wrist bands. Prime Minister Prayut Chan-o-cha this week set an October target for the entire country to be reopened to quarantine-free travel, saying “it is time for us to take the risk together”.

While Indonesia is experiencing its highest virus numbers since January – there were 12,990 new cases on Friday – vaccination has been prioritised in Bali and in particular three COVID-19-free “green zones”: Ubud, Sanur and Nusa Dua.

It is in those locations that 19 hotels have been set up to accommodate foreign tourists to be tested upon arrival, before waiting out five days in quarantine in their room if they have not been inoculated or if vaccinated, five days where they are able to roam freely at the hotel. After the five days they can travel around the island.

Bali’s deputy governor said tourists from China were among those the province was hoping to attract while an initially small intake would increase gradually if the program unfolds smoothly. There were 1.19 million Chinese arrivals in Bali in 2019, the last full year before the virus, a figure exceeded only by the 1.23 million Australian visitors that year. Without them, Bali’s tourism-reliant economy contracted by 12 per cent in each of the last two quarters of 2020 and by nearly 10 per cent in the first quarter of 2021, with more than 360 hotels up for sale.

Bali’s economy has suffered from the absence of foreign tourists.Credit:Amilia Rosa

Given the quarantine demands for travellers returning to their home countries – most cities in China, for instance, have demanded 14 days of confinement plus seven days at home – it is unclear how many will sign up.

As vaccinated Australians are not permitted to travel abroad unless granted a government exemption, and must pay for a fortnight’s hotel quarantine upon flying back, the prospect of Australians holidaying in Bali again seems even more distant. But officials hope that wait can be shortened with a successful re-opening.

He said the government aims to have the vaccination rate at 100 per cent in the three green zone communities by July, and the plan is to get Bali to 70 per cent inoculation to create herd immunity in the same month.

Bali will take visitors from countries that have had success in containing the virus, identifying as low risk Singapore, the United Arab Emirates and South Korea alongside China and Australia.

Tourists at Sanur preparing to take a speed boat to the island of Nusa Lembongan this week.Credit:Amilia Rosa

“We need foreign tourists to reactivate our tourism activities better [but] certainly we will always protect Bali people’s health first,” he said.

There is a new surge of cases in Indonesia, which has been hit the hardest of any south-east Asian nation with nearly 2 million total cases and more than 53,000 deaths. The latest spike, chiefly the delta variant, comes in the wake of last month’s Eid-al-Fitr holiday.

Bali has not escaped entirely – there were 72 new locally transmitted infections recorded on Friday and 524 active cases. But business leader I Made Yoga Iswara, the chairman of Bali’s General Managers Association, hopes Indonesia’s latest outbreak won’t dissuade tourists from coming to Bali or convince the government to delay the green zone project.

He said 1370 establishments across the tourism industry in Bali had health and safety certifications and businesses were at the outset only targeting 30 per cent occupancy levels to stay afloat.

“The pandemic is not something that will go away soon. We need to accept that it is now part of our lives, we need to adapt to it,” Yoga said. “Bali needs a starting point.”

A Work from Bali program has also been announced, allowing public servants to temporarily relocate to the island to boost domestic tourism, but there are fears about international travellers being let in too early.

Dr Windhu Purnomo, an epidemiologist from Airlangga University in Surabaya, said the reopening to foreign tourists should be postponed.

“I think we have to restrain ourselves in the condition that is still very risky,” he said.

“Look at Australia, they would immediately put a lockdown on although they only have less than five new cases. What a contrast with us, with hundreds of deaths we still have the intention to open doors for international tourism.

“However, if the government insists, the tourists must be put into 14-day quarantine.”