The ‘Czech George Floyd’: Video of policeman kneeling on neck of Romany man echoes US death that send shockwaves around the world

Video footage showing a police officer kneeling on a Romani man who later died in an ambulance has gone viral on social media in the Czech Republic, drawing comparisons to the death of George Floyd in the U.S. last year.

The arrest carried out by three police officers was recorded by a witness in the city of Teplice in the north-west of the country on June 19.

Members of the Roma community have compared the incident to the death of Floyd, a black man in Minneapolis, at the hands of officer Derek Chauvin on May 25, 2020.

But police and the Czech government have since defended the actions of the officers, with the police rejecting accusations of brutality on social media saying the incident was ‘No Czech Floyd’.

One of the arresting officers is shown in the video kneeling on the man’s neck or shoulders, who is lying face-down on the floor, for several minutes. Another is shown holding the man’s feet, while a third attempt to handcuff him.

The voices of several Roma bystanders are heard in the video that was filmed from above, and people are shown watching the incident unfold on the street. 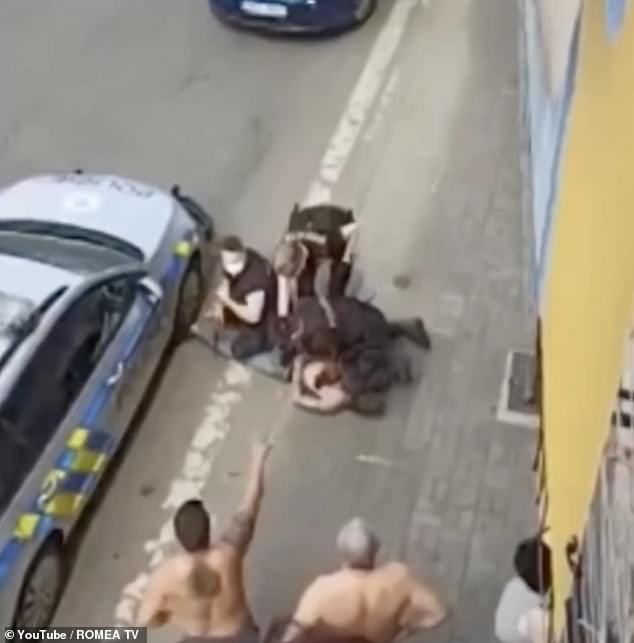 Video footage showing a police officer kneeling on a Romani man who later died in an ambulance has gone viral on social media in the Czech Republic (pictured, a still from the video), drawing comparisons to the death of George Floyd in the U.S. last year

‘They’re smothering him,’ a woman’s voice can be heard saying in the video as the main is heard screaming in pain.

‘That’s their job,’ a man’s voice says, apparently defending the police’s method of arrest. ‘Stay down, don’t get up,’ another Romany man advises the man.

The officers can be heard telling the man repeatedly ‘don’t fight me’ as he struggles on the ground and appears to attempt to bite them, and ask the bystanders where they know him from and if he has any illnesses.

The bystanders appear to tell the man to calm down, pleading with him to stop resisting the officers, while asking each other why he was being arrested.

The man, identified as 46-year-old Stanislav Tomáš, later died in the ambulance that was called to the scene of the arrest by the police.

Czech police have said they were required to use force because the man was aggressive after a drug overdose.

They said the preliminary cause of death was the overdose, citing a preliminary post mortem examination that they say found he suffered ‘pathological changes to the coronary arteries’, believed to have been from amphetamine use.

A spokesman for the emergency rescue services in the Ústecký Region, Prokop Voleník, told Romea.cz that a scuffled had been reported between two people believed to be under the influence of narcotics.

‘When the police patrol arrived at the scene, one of the men fled while the other was subdued by the officers and handcuffed,’ police spokersperson Veronika Hyšplerová told Blesk.cz, a Czech tabloid newspaper.

‘He then died in that state,’ a police spokesperson said, before rejecting the possibility that it was the officer’s intervention that caused the man’s death.

A second video was released by Czech authorities shortly before the police arrived showing the topless man shouting while lying on the pavement before getting to his feet and lunging at another man, before punching a car.

Interior Minister Jan Hamacek tweeted that the police had his full support over the incident, and that they are entitled to respond to anyone under the influence of drugs. 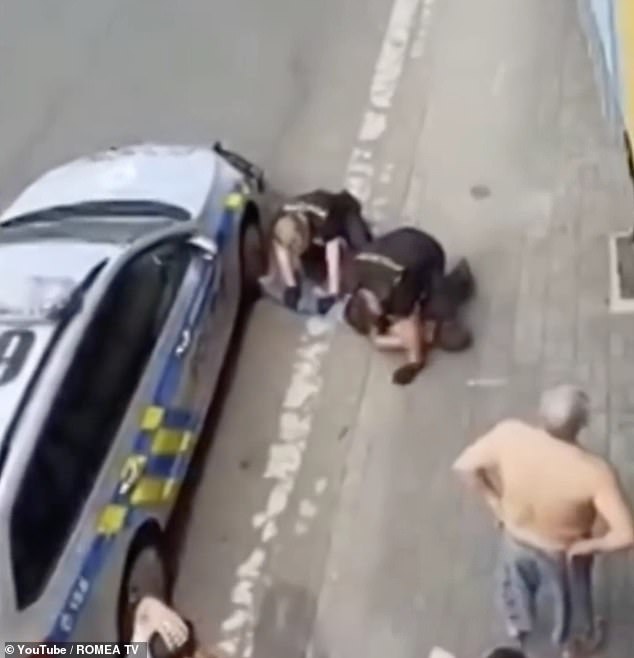 The arrest carried out by three police officers was recorded by a witness in the city of Teplice in the north-west of the country on June 19, and has drawn widespread condemnation

But Roma organisations in the country have said that the incident serves to highlight how their community is treated by Czech authorities.

Speaking to the BBC, Michal Miko of Romanonet said the incident was the ‘height of brutality’.

‘If he was already arrested with his hands cuffed behind his back, why were they kneeling on him for the next three minutes? That’s something I don’t understand,’ he told the broadcaster.

Former British police officer Petr Torák, who moved from the Czech Republic in 1999 and was awarded an MBE for ‘services to the Roma community’, told Roma.cz: ‘From the video footage it is apparent that yet another person has died as a consequence of a police intervention. Is this the Czech version of Floyd’s case?

‘I will be carefully following the investigation and hoping that if the officers are found to be at fault, the Czech legal system and all of society will condemn this police brutality and hold the officers accountable.’

At the site of where the man was detained, people left flowers and candles on Tuesday, and a protest is reportedly set for Wednesday in the Czech capital, Prague.

Discrimination against Roma people has been well documented in Europe by human rights groups, with a 2015 report by Amnesty International highlighting the ‘horrifying … systematic prejudice’ Roma children face in Czech schools.

Between ten and 12 million Roma people are estimated to live in Europe, making Roma the continent’s biggest ethnic minority. An estimated 300,000 live in the Czech Republic alone.