What are you looking at? Playful Beluga whale lunges forwards every time zoo visitor approaches its tank

This is the hilarious moment a beluga whale was interacting with visitors at an aquarium in southern Taiwan.

A woman was watching the large white whale from behind a screen when the mammal approached and moved its head in her direction causing her to jump back.

When the woman returned to the window, the whale repeated its manoeuver causing some women and children in the back to squeal with delight. 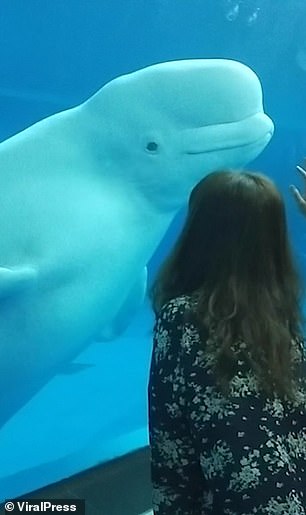 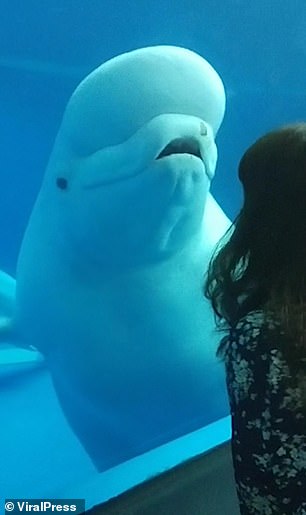 The mammal interacted with visitors for more than a minute at the popular aquarium in Pingtung County on May 3.

While amused zoo visitors watched, the make creature pretended to leave but returns immediately appearing to try to startle the woman in front.

It lunged at the woman while open it’s mouth as if to say ‘what are you looking at?’

The whale lingered in front of the viewing glass for almost a minute to entertain the visitors before swimming off on the other side of the aquarium.

The woman in the video Huang Chunchun, whose friend recorded her, said it was one of the most memorable encounters she had with a wildlife in the zoo.

She said: ‘I have been to Pingtung Sea Life Museum multiple times before but this was the most memorable encounter I had with a wildlife. 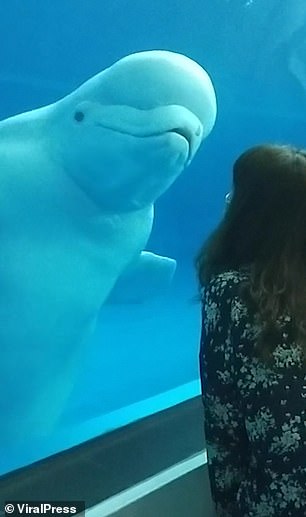 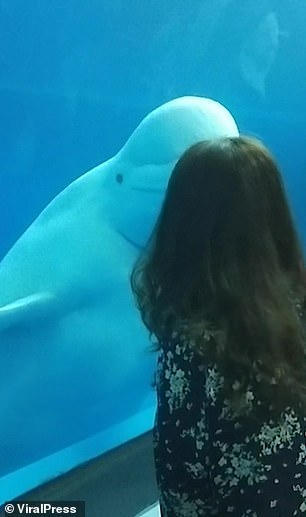 Ms  Chunchun, who interacted with the Beluga whale, said playing with the mammal was the best experience of her entire life

‘This whale played with me for quite some time. I don’t how it learned to do that. Everyone was happy to watch it play with me.’

Belugas are sociable mammals that live, hunt and migrate together in pods which range in size from a couple of whales to several hundred animals.

Their bulbous forehead called a ‘melon’ is flexible and capable of changing shape.

Beluga whales have a relatively high intelligence that is equivalent to the level of children aged between three and five.

These lively and energetic animals are highly social creatures and love to play around every chance they get.

They enjoy interacting with humans and spitting water directly at people is their way of expressing friendly intentions.

Belugas, whose name originates from the Russian word ‘bielo’ meaning ‘white’, are typically born grey or even brown and gradually fade to white as they mature at around five years of age.