After four months of having to cover our faces whenever we stepped out our front doors, we can let our masks slip.

We will still need to wear them in public buildings and outdoors when caught in a crowd but, for the first time since the second wave epidemic crested, we will be guided by common sense instead of a hardline, public health edict. 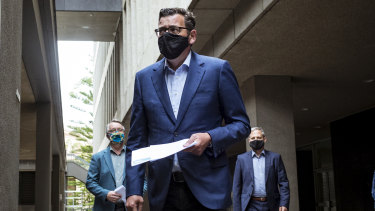 Premier Daniel Andrews has announced that masks are no longer mandatory outdoors.Credit:Chris Hopkins

It removes from our streets and parks the most visible symbol of our COVID winter, signalling that although the pandemic still rages in Europe and America and future outbreaks are likely, we are where we want to be at the end of this wretched year.

It puts an end to the silliest of culture skirmishes – thankfully it never quite reached the stage of warfare here – about whether mandating masks outside was a reasonable public health precaution or an elastic strapped conspiracy against freedom. 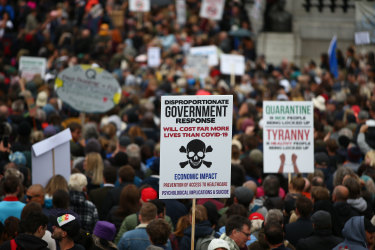 Demonstrators at an anti-mask rally in London’s Trafalgar Square.Credit:Hollie Adams

It scraps the COVID restriction of weakest efficacy and re-focuses the public health response where we know the risk of viral spread is greatest: in hospitals and nursing homes, at family gatherings and in confined, indoor public spaces.

Since July 22 in Melbourne and the Mitchell Shire and August 2 across the rest of Victoria, it has been mandatory to wear a mask outdoors. Anyone caught not wearing one, whether they were walking a deserted street or through empty parkland, could be fined $200.

It is unclear whether, in all that time, the wearing of masks outdoors prevented the spread of a single COVID case. Victorian Chief Health Officer Brett Sutton cannot say how many of the state’s 20,000 cases were transmitted outside or indeed, if any were.

“We have got very strong suspicions that the vast majority of our transmission has been within households and within workplaces,’’ he said. “We don’t have many examples of outdoor transmission and where it has been picked up, where there have been people in contact outdoors, they have also been in contact indoors.’’ 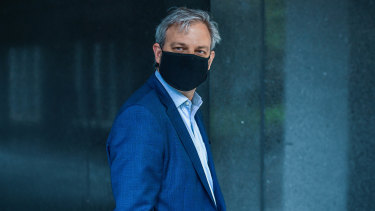 Chief Health Officer Brett Sutton has been a strong advocate for the mandatory use of faces masks.Credit:Joe Armao

Yet, despite the absence of data supporting the use of masks outdoors, they became an article of faith in Victoria’s response to its second wave.

The new regime, which comes into force on midnight Sunday, takes Victoria away from what public health expert Nathan Grills, an associate professor at the University of Melbourne’s School of Population and Global Health, calls “dumb masking’’ – a broader-than-necessary provision supported by neither epidemiology nor layman’s logic.

Epidemiologist and infectious disease experts such as Deakin University’s Catherine Bennett and Australian National University’s Peter Collignon have both argued that, given the negligible risk of contracting the virus from someone in the open air if you keep your distance from other people, the wearing of masks in those circumstances served no public health purpose.

In the UK, the Scientific Advisory Group for Emergencies advises against the “excessive measure’’ of mandating their use outdoors. “It is critical that recommendations are seen to be based on the science and proportionate,’’ the group notes.

Professor Sutton and Victorian Premier Daniel Andrews took the view that, however small the risk of outdoor transmission, it was not a big ask for people to wear a mask to mitigate it. The inconvenience of wearing a mask when walking the dog seemed trifling compared to economic, social and educational disruption caused by Victoria’s other COVID restrictions.

Victoria is now moving into line with jurisdictions like California, where masks are mandatory indoors but outside only when social distancing is not possible. Masks must still be carried outside in case the need arises.

For anyone uncertain about when to wear one, Mr Andrews offered a Bunnings analogy complete with “sausage rule’’: you must wear one inside the store, you don’t have to wear one in the parking lot but, if you get stuck in a queue for a snag, please put one on.

“Common sense drives this,’’ Mr Andrews said. “If you are outside in the open air and you believe you can keep your distance from people then you don’t need to wear it."

Having gone three weeks without a new confirmed case, Victoria is on the brink of COVID normal. Professor Sutton believes all community transmission of the virus has ceased. The Premier flagged Christmas day gatherings of up to 30 people, a gradual return to the office and greater patronage for restaurants, cafes and pubs.

For many of us, the greatest returned pleasure is the simplest – walking outside and filling our lungs with fresh, free air.

Our Morning Edition newsletter is a curated guide to the most important and interesting stories, analysis and insights. Sign up here.