Joe Biden mourns the Queen: US President nods his head in respect to Her Majesty as he and First Lady Jill go to see monarch lying in state after travelling to Westminster Hall in ‘The Beast’

US President Joe Biden has arrived at Westminster Hall to pay his respects to the late Queen who is lying-in-state before funeral ceremonies tomorrow.

President Biden and First Lady Jill were seen standing on a VIP balcony looking down at the Queen’s coffin, which is under constant guard and draped in flags.

The American president touched his hand to his heart and appeared to snap off a quick salute to the late monarch in a gesture of respect, before continuing on through the hall.

The couple were joined by the US ambassador to the UK, Jane Hartley, who bowed her head as she paid her respects to Her Majesty.

Mr Biden had pulled up to Westminster in his famed armoured limousine, a £1.3 million stretch Cadillac nicknamed ‘The Beast’, with some in the crowd outside the palace cheering his arrival.

Biden’s visit came moments after French President Emmanuel Macron and his wife Brigitte were spotted making their way to the Palace of Westminster.

Mr Macron, who is seldom seen out of his trademark blue suit, was seen in a more understated dark navy jacket, charcoal grey trousers and black trainers alongside his wife, who dressed in a similar fashion.

The pair donned sunglasses as they strolled through central London, flanked by aides and security guards.

After paying their respects to the late monarch, Biden and Macron will join King Charles and scores of other world leaders and royals for a reception at Buckingham Palace, where they will present the new king with a book of pictures celebrating the Queen’s visits to France.

Elizabeth’s body has been lying in state at the historic Westminster Hall since Wednesday, and people from all walks of life and from around the world have been filing past in a constant, emotional stream, many queuing overnight. 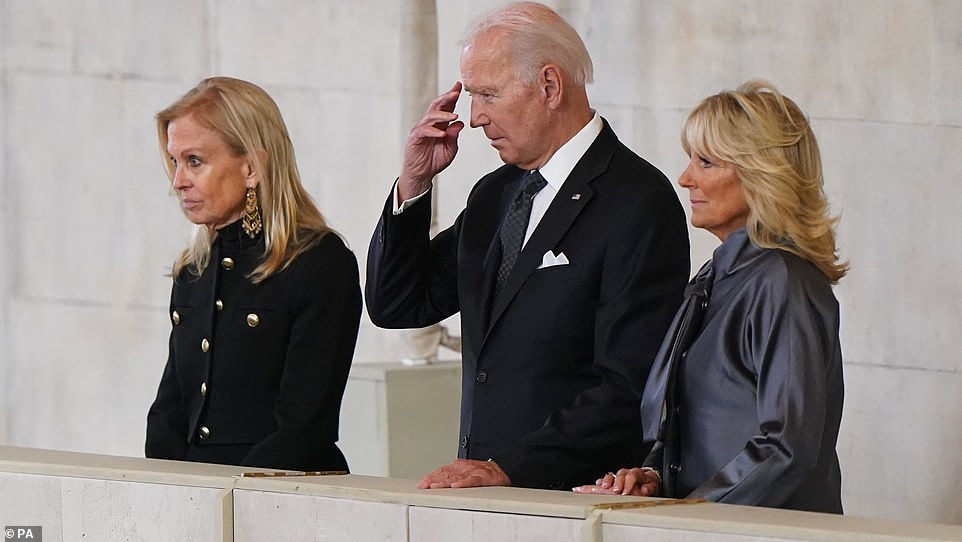 The American president touched his hand to his heart and appeared to snap off a quick salute to the late monarch in a gesture of respect, before continuing on through the hall 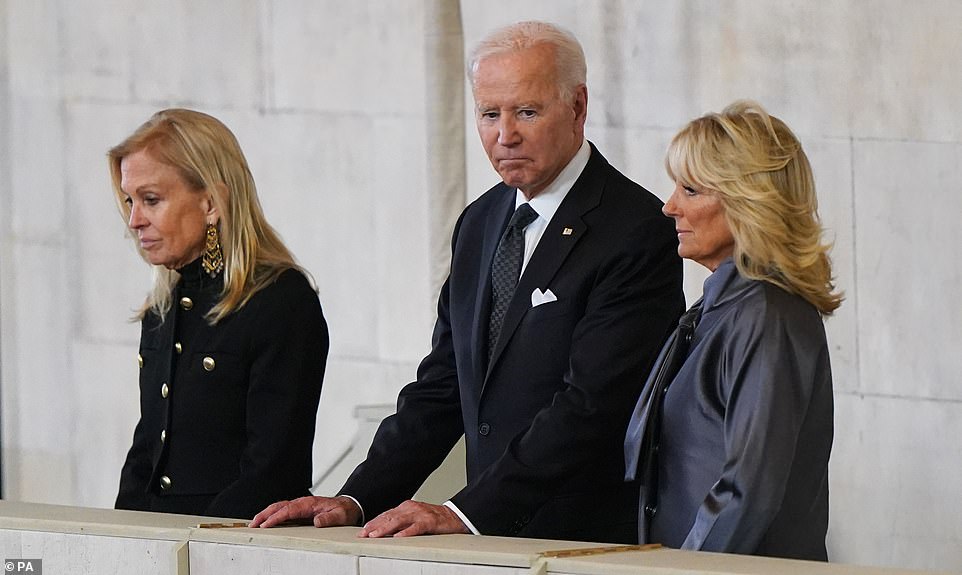 President Biden and First Lady Jill (right), along with US Ambassador Jane Hartley (left) were seen standing on a VIP balcony looking down at the Queen’s coffin, which is under constant guard and draped in flags 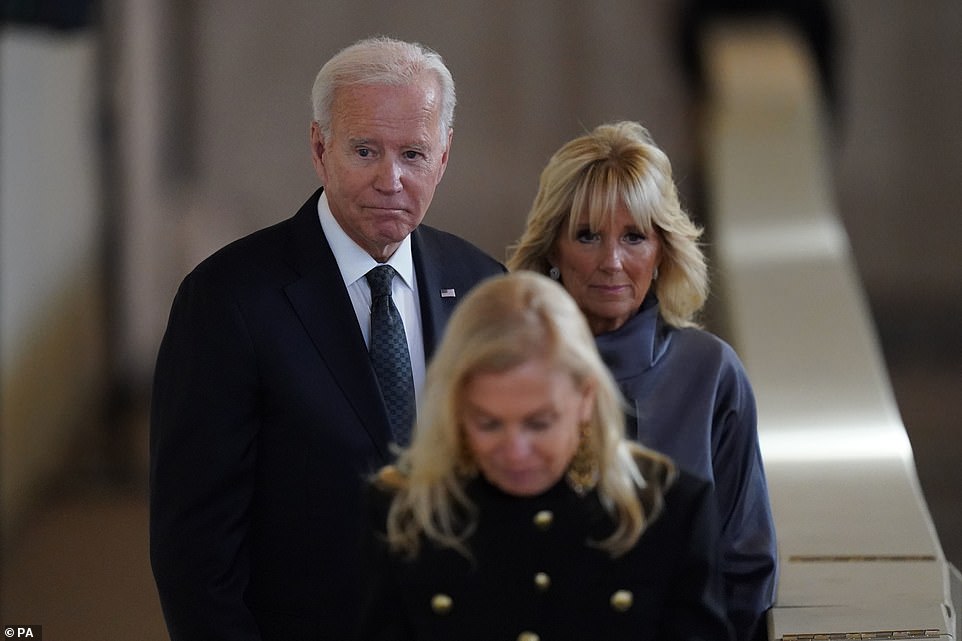 US President Joe Biden and First Lady Jill Biden view the coffin of Queen Elizabeth II, lying in state on the catafalque in Westminster Hall, at the Palace of Westminster, London 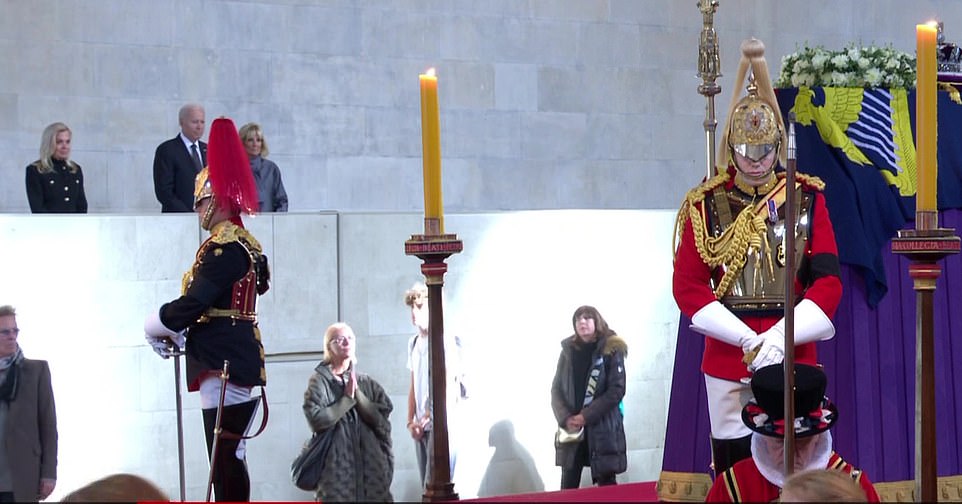 Biden is seen top left looking down on the Queen’s coffin, as members of the public pay their respects to Her Majesty from the floor of Westminster Hall 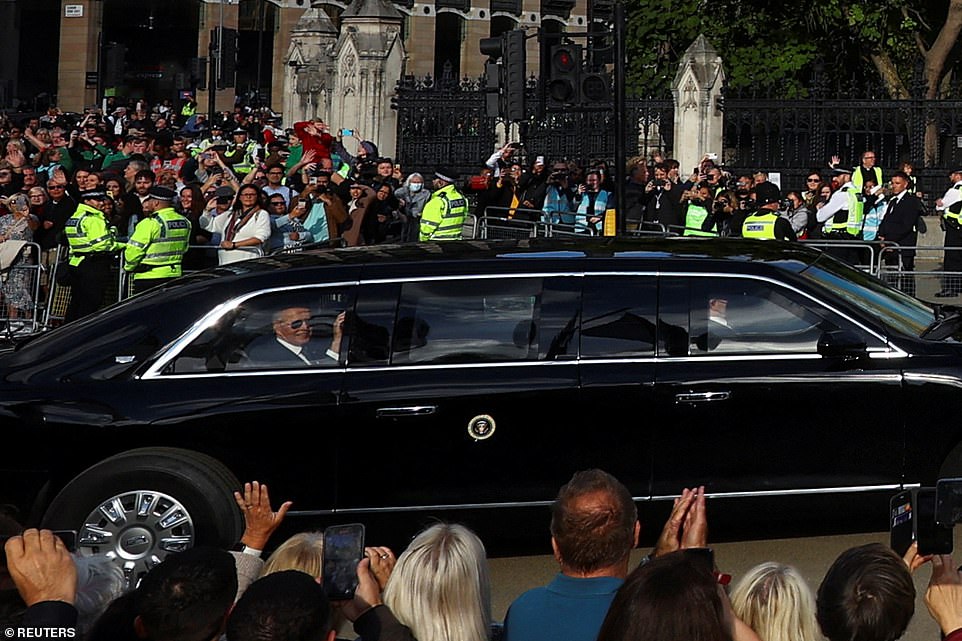 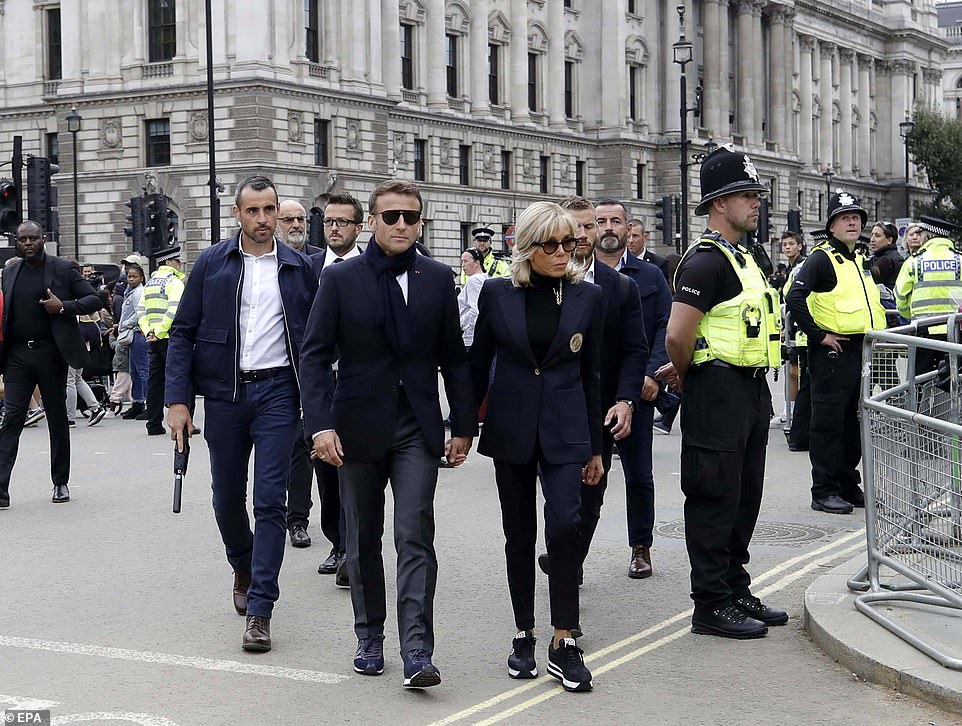 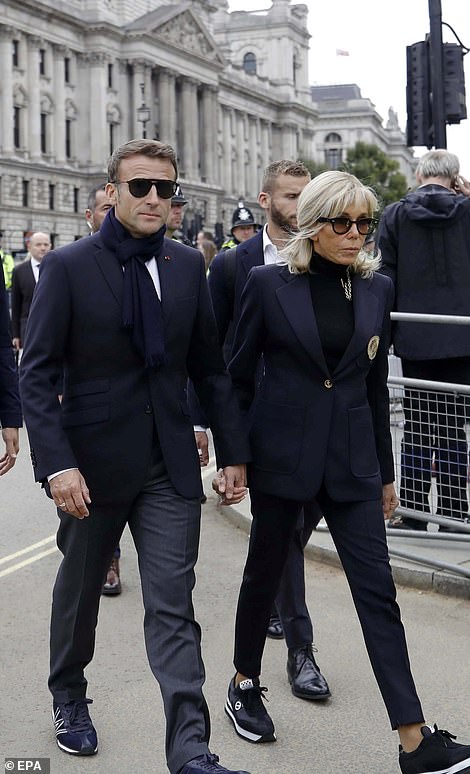 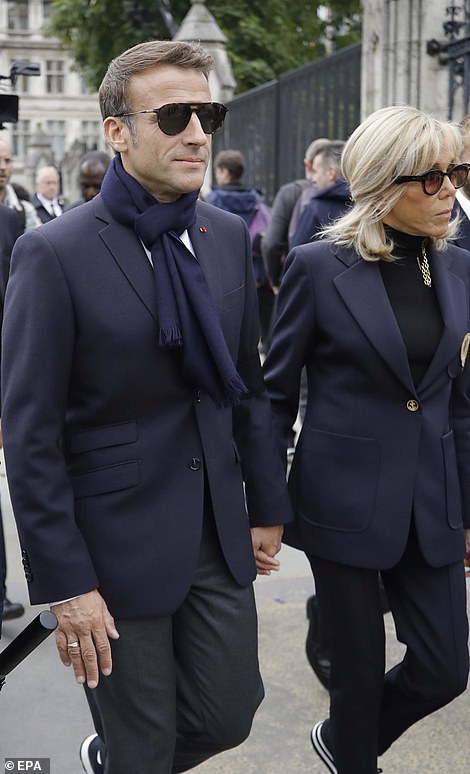 Mr Macron, who is seldom seen out of his trademark blue suit, was seen in a more understated dark navy jacket, charcoal grey trousers and trainers alongside his wife, who dressed in a similar fashion 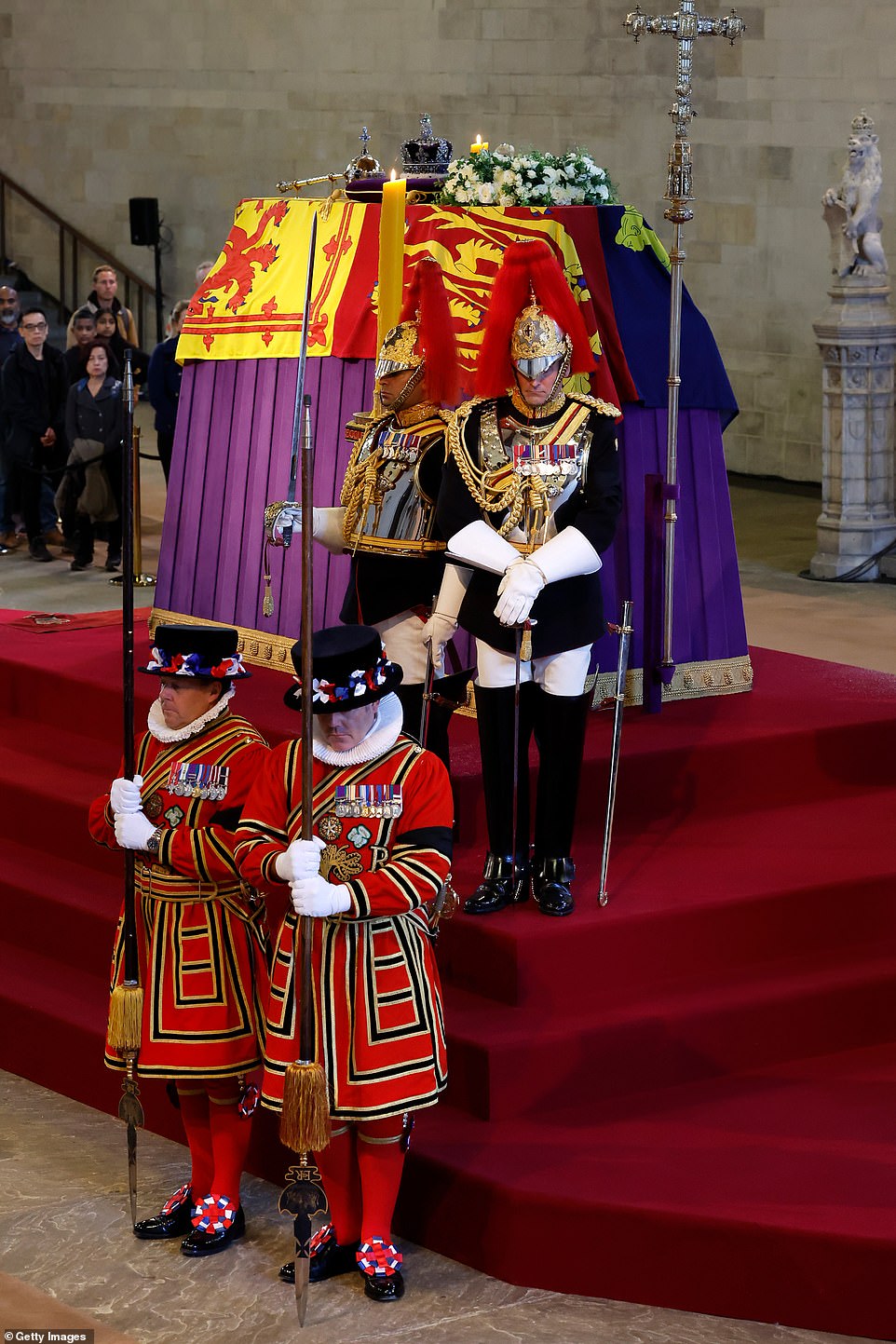 Royal guards stand by Queen Elizabeth II’s flag-draped coffin lying in state on the catafalque at Westminster Hall on September 18, 2022 in London, England 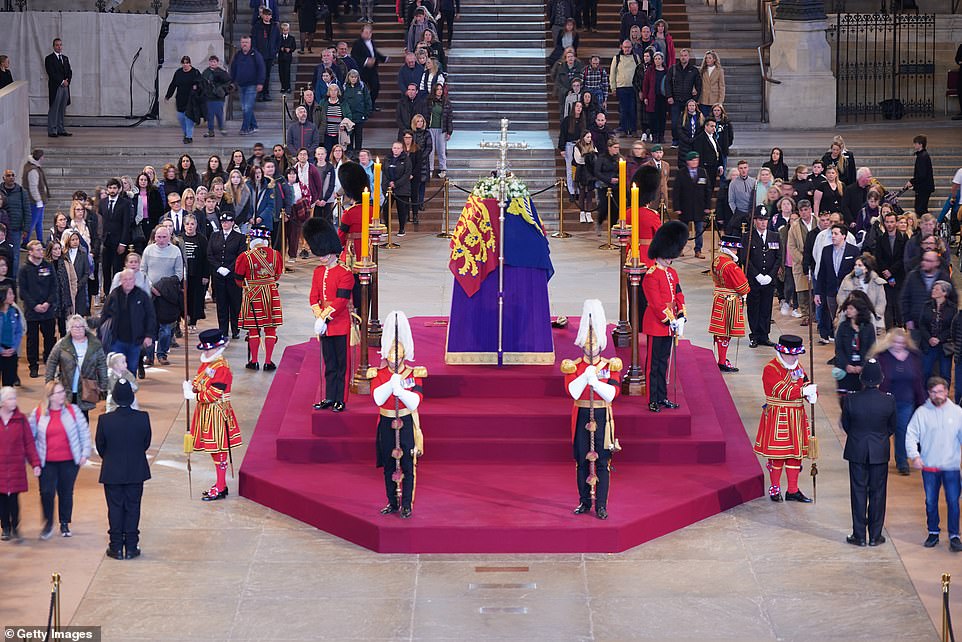 The Queen’s coffin lies on a dias on the floor of Westminster Hall at the Palace of Westminster. It will remain in place until tomorrow morning, when it will be moved for her funeral at Westminster Abbey 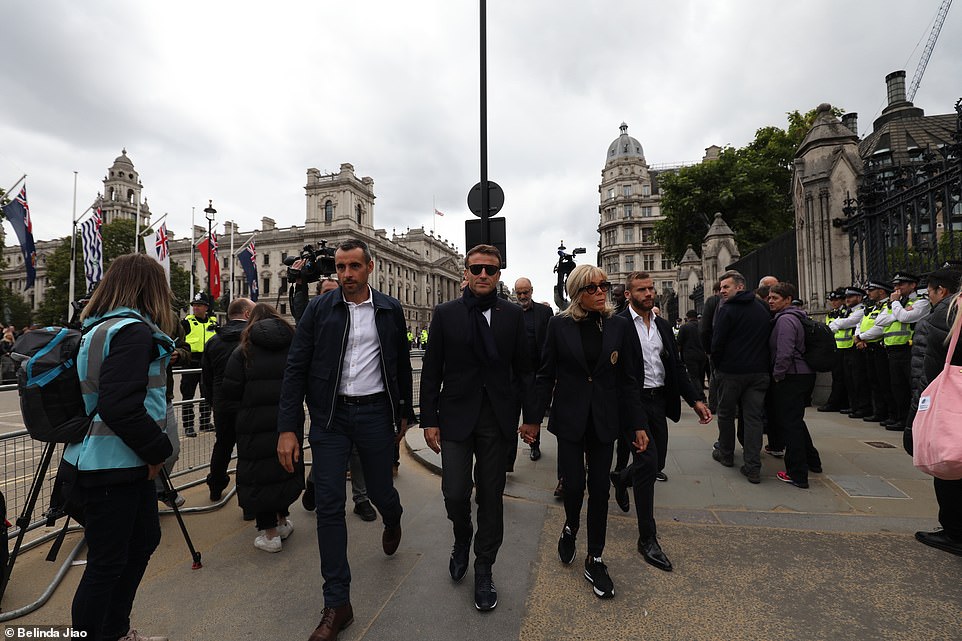 The Macrons were seen donning sunglasses as they strolled through central London today, flanked by aides and security guards

King Charles III and Queen Consort Camilla are preparing to host up to 1,000 VIPs at the Buckingham Palace reception this evening.

Most are expected to view the Queen’s coffin, which will lie in state until tomorrow morning, in the ancient heart of Parliament today after being given a VIP timeslot.

But the list of dignitaries also includes a string of controversial strongmen, including Brazilian President Jair Bolsonaro, who was filmed today giving a thunderous speech from the windows of the Brazilian Embassy in London to a cheering crowd waving the national flag.

And today the Royal Embassy of Saudi Arabia confirmed that Mohammed Bin Salman, known by the abbreviation MBS, had been invited to attend the funeral.

He is set to hold talks with British Prime Minister Liz Truss on Sunday evening, but his presence at the Queen’s funeral tomorrow sparked outrage after Saudi agents brutally murdered and dismembered jounralist Jamal Khashoggi in Turkey in 2018.

China has also announced it will send its vice-president, Wang Qishan, to the funeral.

Due to strained ties, the UK opted to invite ambassadors, not heads of state, from Iran, Nicaragua and North Korea. Meanwhile, Russia and Belarus are among a small group of nations excluded altogether following Putin’s invasion of Ukraine. 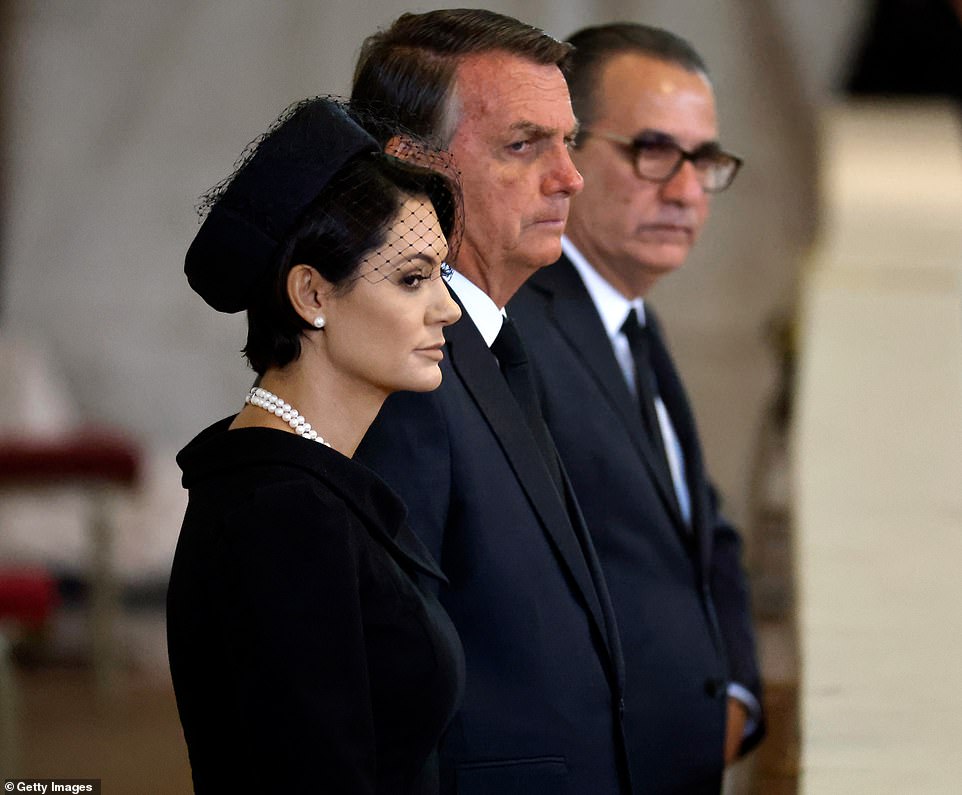 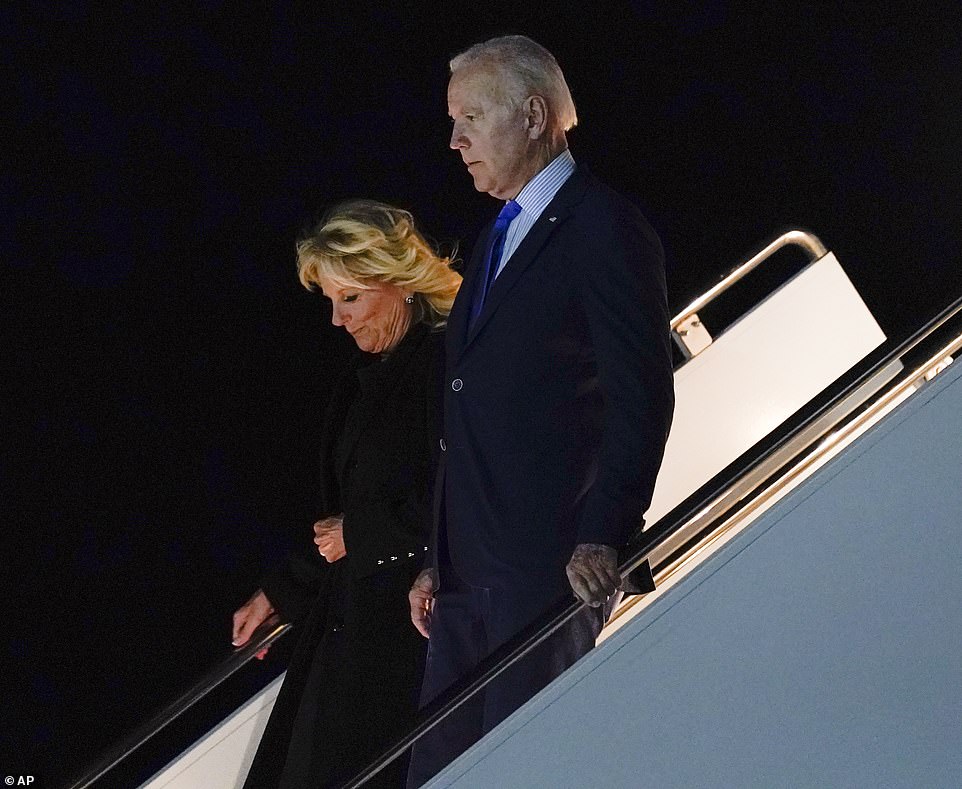 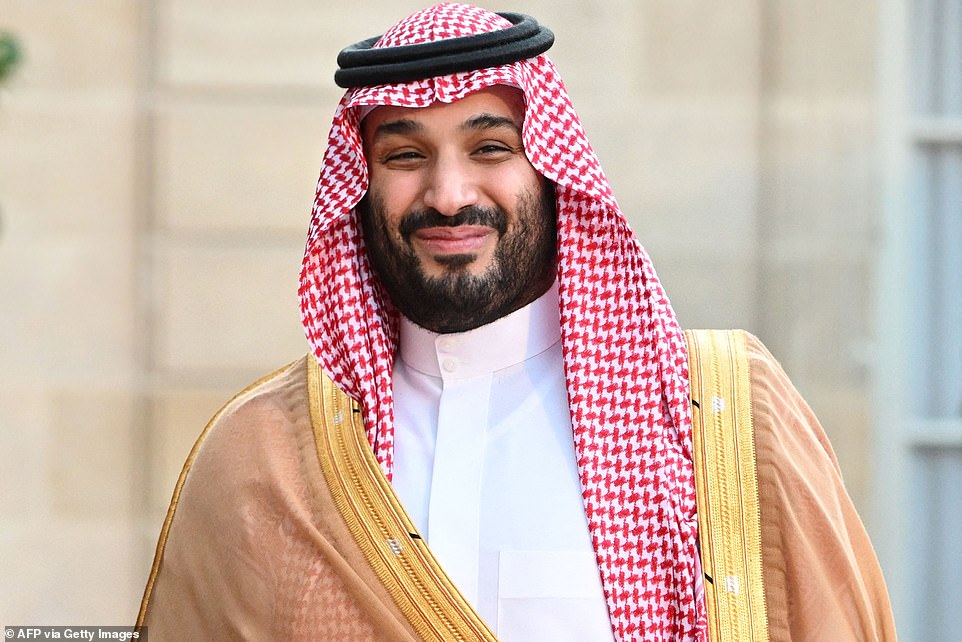 The President of Armenia copped flak earlier today for disrespecting the Queen as he took photos and chatted to aides during a visit to see her lying-in-state in Westminster Hall.

Vahagn Khachaturyan, an ally of warmongering Russian president Vladimir Putin, was seen bowing at the late monarch’s coffin as one of his lackies snapped some pictures on his mobile phone.

Bystanders meanwhile claimed the Armenian leader was loudly rabbiting on to his entourage as they trundled along the VIP walkway and down to the floor where Queen Elizabeth II’s coffin is lying.

His actions flew in the face of strict rules in the 1,000-year-old chamber which forbid the taking of photos or videos and call for quiet, respectful behaviour. 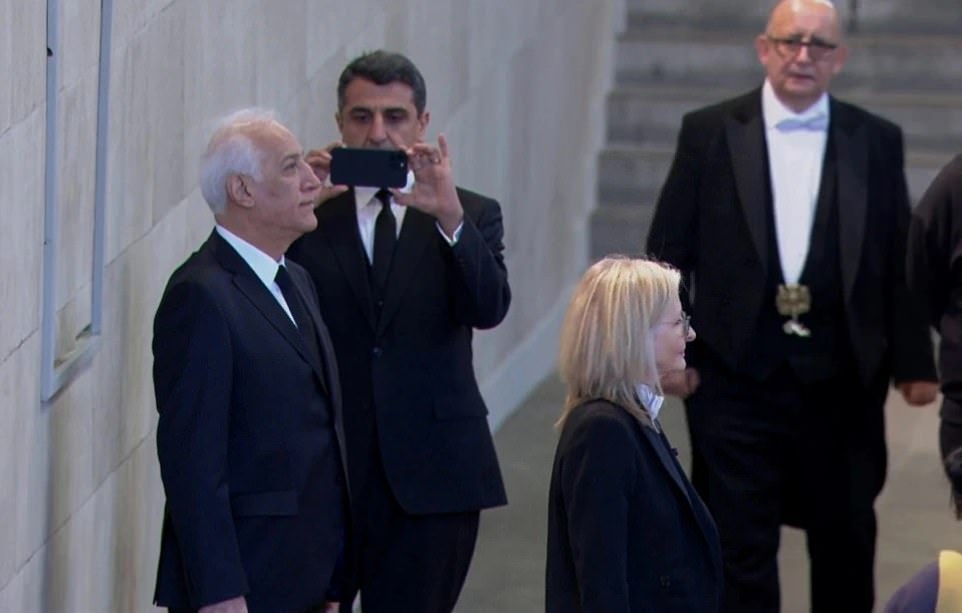 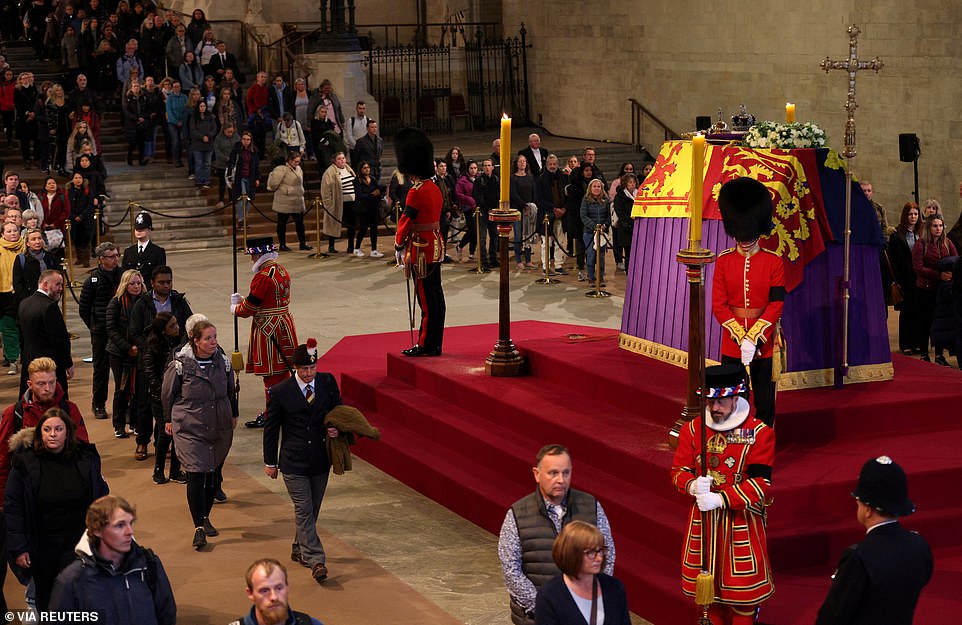 Members of the public pay their respects as they pass the coffin of Queen Elizabeth II, Lying in State inside Westminster Hall, at the Palace of Westminster in London on September 18, 2022 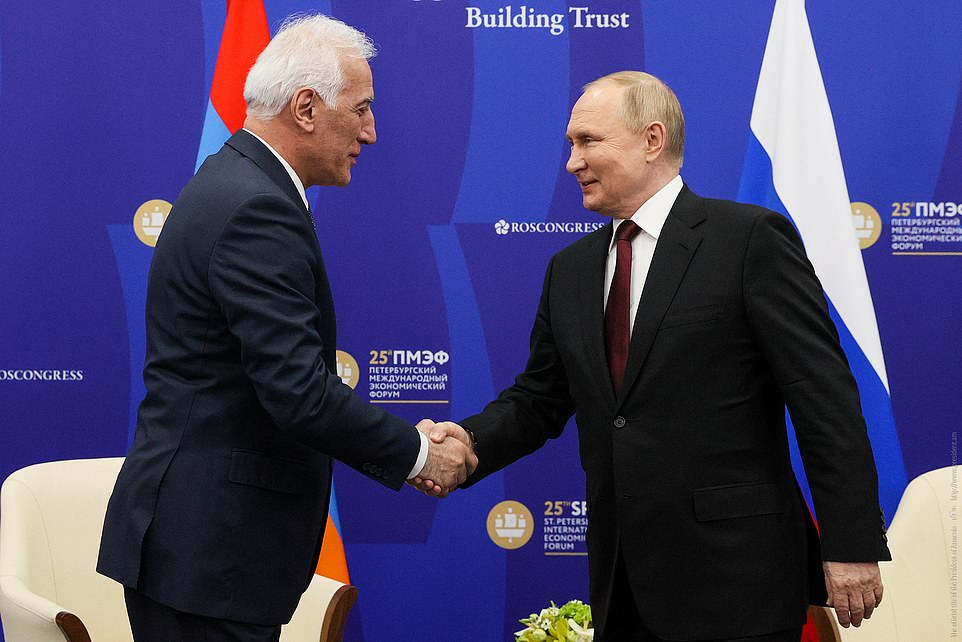 President of Armenia Vahagn Khachaturyan (left) is seen embracing President of Russia Vladimir Putin in June. His behaviour in Westminster Hall today was criticised by some bystanders

Khachaturyan was seen in June of this year sharing a warm embrace with Putin at a Russian economic conference even as war raged across the border in Ukraine.

One attendee at Westminster Hall told The Sun: ‘There were hundreds of people in that hall – no one was speaking. Only him. Yap, yap, yap, yap. He clearly planned to have his photo taken.

‘He and his aide hold back as the group in front passes the coffin… He knows the rules and would have been told before he went in.’

Another angry source said: ‘Everyone has managed to follow those rules to the very letter – apart from this one individual.’

It is unclear whether Khachaturyan, who remains a close ally of the Kremlin despite the ongoing conflict in Ukraine, will join other world leaders at the Queen’s funeral tomorrow.

The VIP time slots given to visiting heads of state and foreign dignitaries comes as hundreds of thousands of people queue spend hour after hour lining up to see Her Majesty.

Since Wednesday many had patiently stood in line as they wait to pay their respects, with the queue snaking its way through central London for more than four miles past numerous landmarks including the Tate Modern, the London Eye and Tower Bridge.

Later today officials will stop more people from joining the queue as they look to clear the line before the Queen’s coffin is moved in tomorrow’s funeral procession to Westminster Abbey, where her funeral is being held tomorrow morning.