Boris Johnson was warned today that it would be ‘reckless’ to send all children back to school in a fortnight’s time amid calls for the reopening of classrooms to be sped up.

Nine trade unions ganged up on the PM today to demand a ‘phased return’ only for millions of children who have been out of the classroom since the start of January.

Mr Johnson is expected to unveil his roadmap out of lockdown on Monday, with a March 8 restart date anticipated for schools in England.

But how many children will go back straight away is still being debated by ministers. Schools in Scotland will reopen on Monday February 22, but only to a few primary and secondary years at first, with more returning later in March.

In a letter orchestrated by the Association of School and College Leaders (ASCL), education union leaders said they were ‘increasingly concerned’ that the Government could go ahead with a full return of all pupils in England on March 8.

The joint statement said: ‘This would seem a reckless course of action. It could trigger another spike in Covid infections, prolong the disruption of education and risk throwing away the hard-won progress made in suppressing the virus over the course of the latest lockdown. 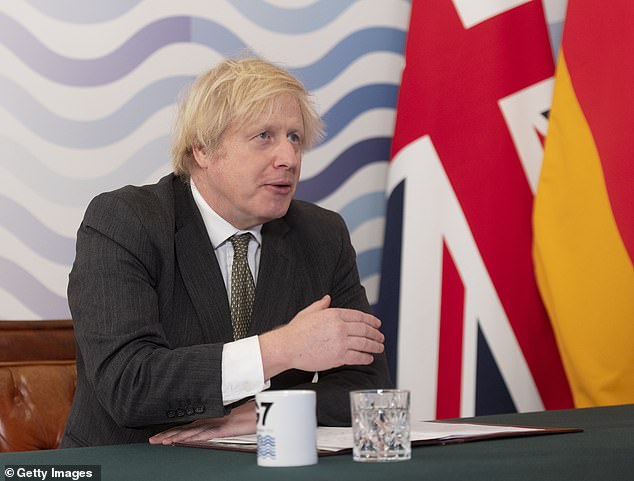 Nine trade unions ganged up on the PM today to demand a ‘phased return’ for millions of children who have been out of the classroom since the start of January.

Boris Johnson has repeatedly said the Government will target March 8 to reopen schools across England.

But it is still unclear exactly how the reopening will work, with the PM due to unveil his lockdown exit roadmap on Monday.

The PM is said to want to see all pupils return on the same day but some union bosses are adamant there should be a phased return to classrooms, with the Health Secretary also said to be advocating a cautious approach.

The First Minister Nicola Sturgeon confirmed on February 16 that schools in Scotland will begin a phased reopening from Monday.

Pupils between the ages of four and eight will be the first to return to classes on that date.

No other pupils will return until at least 15 March, it was said.

Children aged between three and seven will resume face-to-face classes in Wales from Monday.

There will also be returns for some vocational learners, including apprentices, to colleges in order to access training or workplace environments for their practical qualifications.

Mark Drakeford today confirmed that all primary school pupils as well as those in Years 11 and 13 could return from March 15.

First Minister Arlene Foster said last month that schools in Northern Ireland will not reopen until at least March 8.

‘The science around the role that schools play in the overall rate of transmission is uncertain. ‘

It adds: ‘What we do know is that the full reopening of schools will bring nearly 10 million pupils and staff into circulation in England – close to one fifth of the population. This is not a small easing of lockdown restrictions. It is a massive step.

‘These factors necessitate a cautious approach with wider school and college opening phased over a period of time.’

It came as a school leader warned mass-testing will mean some pupils won’t go back to school until April.

The comments by Steve Chalke, founder of the Oasis multi-academy trust which runs more than 50 schools nationwide, comes as Mr Johnson is facing opposition to his plan for widespread, simultaneous returns from teaching unions and Matt Hancock.

The academy chief is leading calls for a staggered return for pupils, insisting a secondary school with around 2,000 students would likely have to invite one year group back each week to carry out testing on such a scale.

Even if it did begin early next month as the Prime Minister proposes, such a process would not realistically be completed until the week of April 19, education bosses claim.

Mr Chalke told the Telegraph: ‘You need a waiting area, a testing area, a holding area, an administrative area and an isolation area for people who test positive.

He added that schools would become ‘a medical centre’ if more than one year group was being brought in for testing at the same time.

All primary school pupils and those facing exams will return to classrooms in Wales by March 15 so long as the Covid-19 situation ‘continues to improve,’ Mark Drakeford said today.

The First Minister will announce no further changes to the country’s level four restrictions – which have been in place since December 20 – as stay-at-home rules are extended for at least another three weeks.

There will also be returns for some vocational learners, including apprentices, to colleges so they can access training for their practical qualifications.

‘I’ll be saying today that on Monday March 15, provided things continue to improve, all primary school children will be back in face-to-face education and those students in secondary schools who are facing examinations, we aim to get them back in the classroom as well,’ the Labour leader said.

‘And then we will carefully review as part of our deal with our teaching unions and local education authorities. We take a step, we collect the evidence, we decide what to do next.’