COVID cases have dipped below 30,000 for the first time in two weeks.

There were 29,173 new cases recorded in what is the fifth day cases have fallen in a row. 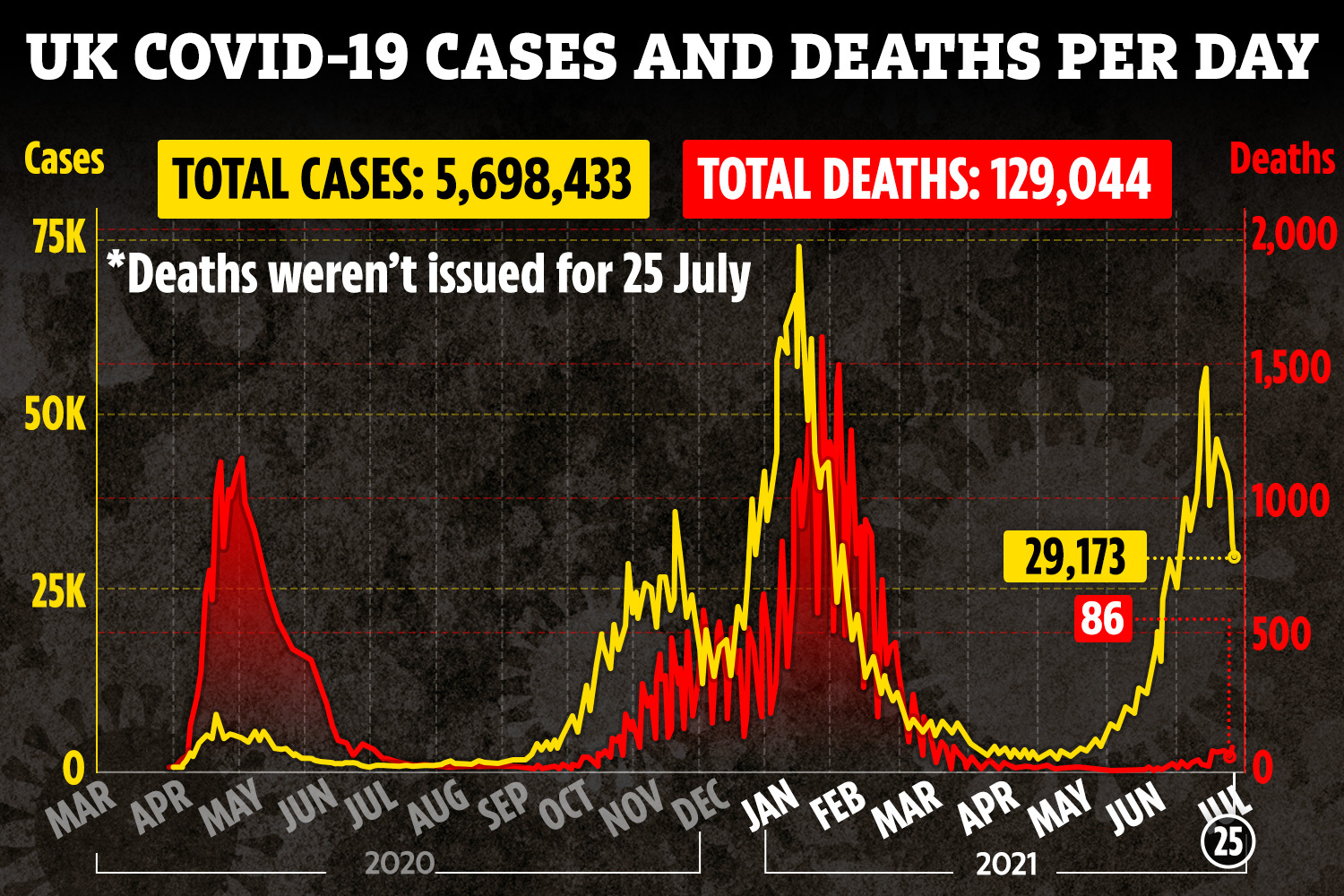 And it is the lowest number since July 10 at 27,843. Death stats are not yet available.

Yesterday, Covid cases fell for a fourth day with 31,795 new infections in 24 hours.

Despite the fall in cases daily deaths continued to rise.

A further 86 new deaths were reported on Saturday – compared to 25 on the same day last week.

Meanwhile, Health Secretary Sajid Javid has apologised after saying people should no longer "cower" from Covid.

The Health Secretary made the comments in a tweet announcing he had made a "full recovery" from the virus, a week after testing positive.

Labour blasted him for belittling those who followed the rules, while a victims' group founder said his comments were "deeply insensitive".

Mr Javid said: "I was expressing gratitude that the vaccines help us fight back as a society, but it was a poor choice of word and I sincerely apologise.

“Like many, I have lost loved ones to this awful virus and would never minimise its impact."

On Saturday, he had written that he had recovered after testing positive for Covid, after suffering mild symptoms.

Mr Javid tweeted: "Please — if you haven't yet — get your jab, as we learn to live with, rather than cower from, this virus."

But this sparked criticism that he was being disrespectful to those who died from the disease in the UK.

Angela Rayner, deputy leader of the Labour Party, was one of several lawmakers from opposition parties and people who had lost family members to the pandemic to criticise his use of the phrase "cower from".

She said: "127,000 people have died from this virus, tens of thousands of whom would still be here if it wasn't for the catastrophic failures of your government,

"So how dare you denigrate people."

It comes as six million Brits face summer holiday chaos if Spain and Greece are added to the government's 'amber plus' list with France.

Travellers returning from France must self-isolate for 10 days even if they are double jabbed.

The Government's decision came amid fears of a rise in Beta variant Covid cases that could evade some vaccine protection.

Holidaymakers were forced to scrap trips at the last minute as French trips were thrown into disarray.

Now holiday hotspots Spain and Greece could be added to the amber-plus list, with Labour estimating 5,857,558 Brits face last-minute quarantine.

Shadow transport secretary Jim McMahon said: “Not only have they [the Government] failed to protect our borders, allowing Covid cases to rocket, they also refuse to be straight with the public and give them the information they need to book travel with confidence, with clear information on the direction of travel of infections in each country.

“Families who have booked holidays in good faith now risk losing out – a 10-day quarantine is simply not an option for many people who are already struggling financially thanks to the pandemic.”