This is the shocking moment an Uber driver refused to let a man’s guide dog in his car and only changed his mind when a passerby intervened.

Stephen Anderson, who is visually impaired, was at Harrow on the Hill station in London with his guide dog Barney when he tried to get an Uber, only to be refused by the driver.

The Uber driver said that he only allowed small dogs in his car and claimed Barney was too ‘big’, despite Mr Anderson’s insistence that he was a guide dog.

Footage of the incident, uploaded to Twitter on September 12, showed Mr Anderson asking the driver why he would not let his dog in the car, despite being legally required to accept guide dogs. 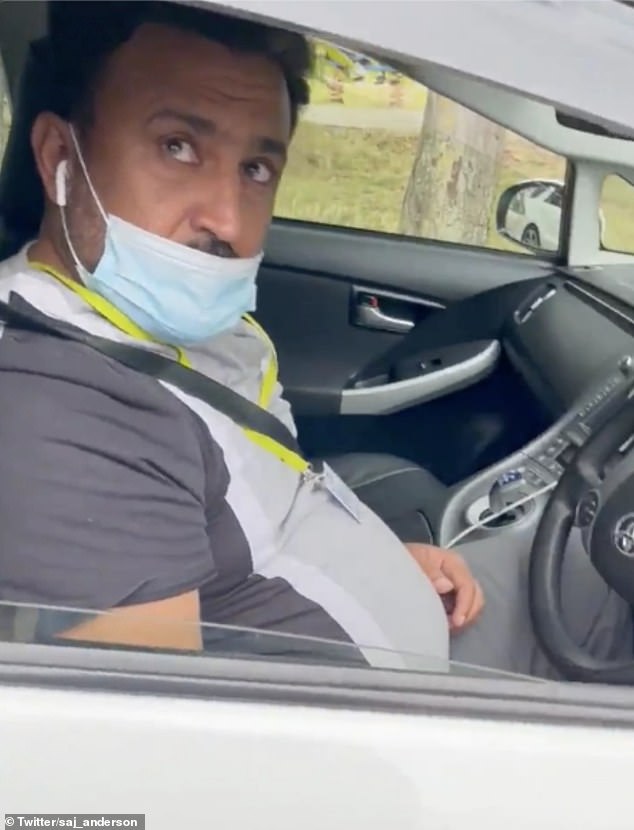 Stephen Anderson was at Harrow on the Hill station in London with his guide dog Barney when he tried to get an Uber, only to be refused by the driver (pictured) because his dog was ‘big’

In the clip, Mr Anderson asks the driver: ‘I’m not quite following you. I’ve just explained to you that he is a guide dog, so that’s fine?’

But the driver says ‘no’, to which Mr Anderson clarifies: ‘It’s not fine?’

The Uber driver, who appears to be unaware of the law and the company’s policy, yet again says: ‘No, inside small ones.’

Mr Anderson again asks: ‘So hang on a second, you’re saying only small dogs inside? Is that what you’re saying?’

He then asks the driver to confirm that he is ‘not prepared’ to take him as a passenger, due to his guide dog being too big.

Mr Anderson, who is a pianist and the director of music at St Thomas’ Church in Kensal Town, explains: ‘I’m just going to explain this very simply. As I’ve explained to you, he’s a guide dog.

‘Under Section 107 of the Equality Act, there is an obligation to take – as he’s a guide dog.’

After the driver asks him if he has told Uber that he has a guide dog, Mr Anderson adds: ‘I’m not required to tell anybody that I’ve got a guide dog with me, and that’s part of Uber’s policy, yes.’

He then confirms that it is both Uber’s policy and the law to take him because he has a guide dog, before asking the driver again if he is ‘refusing’ to take him. 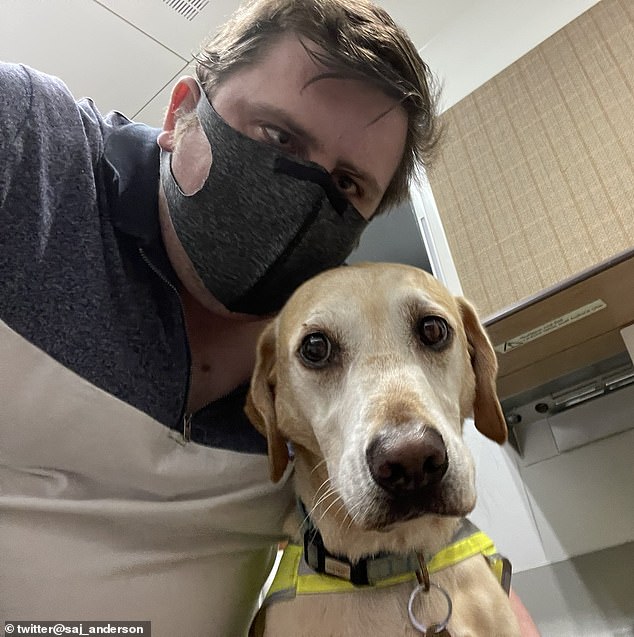 Footage, uploaded to Twitter on September 12, showed Mr Anderson, who is visually impaired, asking the driver why he would not let his dog Barney (both pictured) in the car

A passerby then approaches the passenger window of the car and supports Mr Anderson, telling the driver: ‘You can’t deny him! You cannot deny him, that’s a guide dog.

After the passerby gets involved, the Uber driver then gets out of his vehicle and opens the door for Mr Anderson, allowing him and Barney in the car.

Mr Anderson says it will be easier for him to go in the passenger side of the car, so they can put the seat forward to make space for Barney, and the driver eventually lets him in the car.

Under the Equality Act, guide dog and other assistance dog owners have the right to enter the majority of services, venues and vehicles with their dog.

Uber’s website also states: ‘The ground rules: you must always allow service dogs in Uber rides to accompany their riders – it’s the law.’

Sharing the footage to Twitter, Mr Anderson wrote: ‘Just now at Harrow on the Hill station.

‘Refusing to take a guide dog and only doing so when a kind member of the public intervenes.

‘This has to stop, it’s getting ridiculous. How I didn’t flip my lid I’ll never know!’ 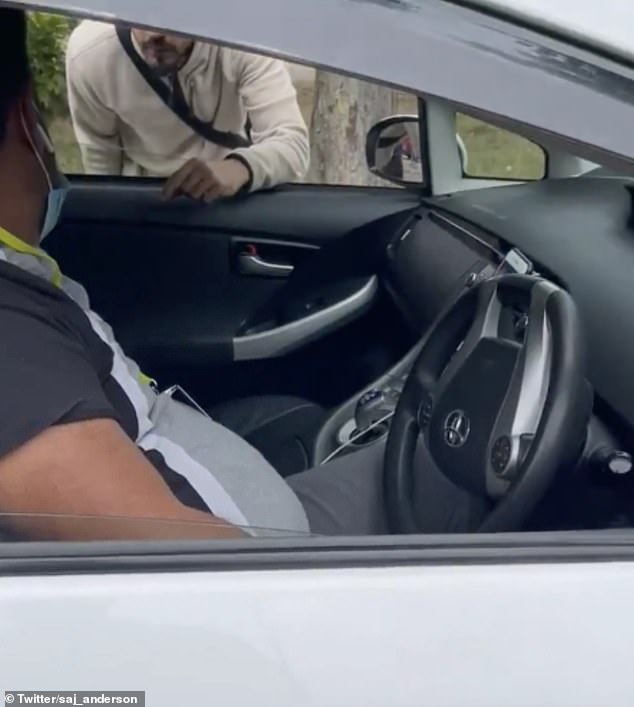 Responding to his tweet, Uber Support said: ‘Hi Stephen, thanks for reaching out. We are sorry to hear this.

‘Please DM us your phone number, email address and pickup details (pick up, drop off, address, date, driver-partner name) so that we can look into this. We will be keeping an eye out for your response.’

In another tweet, Mr Anderson said it is the first time this has happened to him in all his previous encounters, saying it was ‘interesting’ that the driver listened to the passerby but not him.

Social media users were left outraged by the Uber driver’s response, praising Mr Anderson for his calm reaction during the ordeal.

One person commented: ‘I admire your self control. I nearly flipped my lid vicariously watching that.

‘It was great that a member of the public helped out, but that should not have been necessary. Does Uber not provide any guidelines or training?’

Another said: ‘You did really well keeping your cool.’

A third wrote: ‘You should file a lawsuit against @UberSupport. It is against the law to discriminate against person with disability.’

And a fourth penned: ‘Very well done. I noticed how you were calmly eliminating ambiguities and cutting off possible legal escapes. 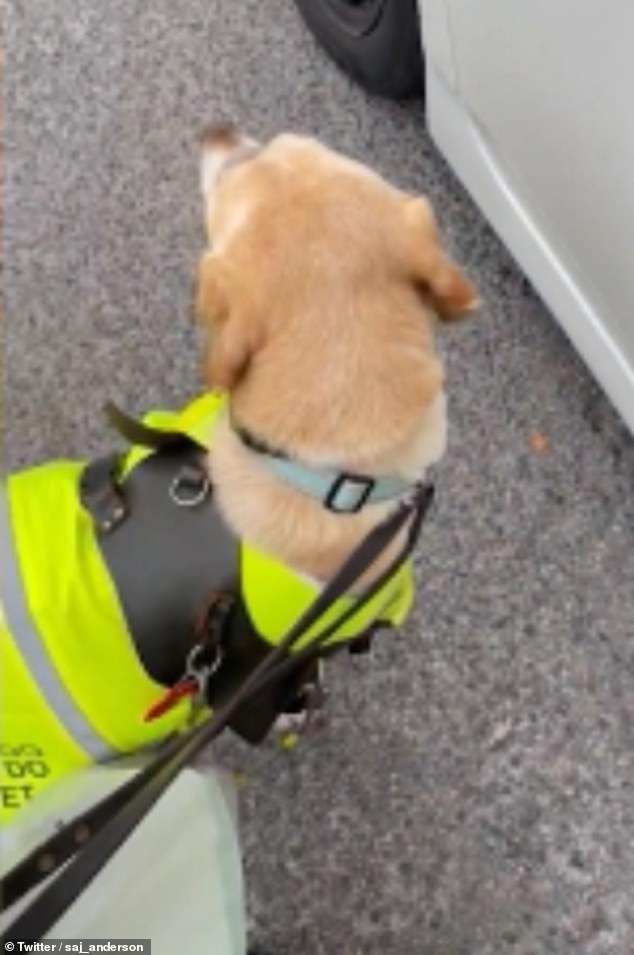 In a tweet, Mr Anderson said it is the first time this has happened to him, adding that it was ‘interesting’ that the driver listened to the passerby but not him. Pictured: Barney

‘Obvious and well documented discrimination. It sucks that you can’t just get where you’re going.’

Research from Guide Dogs showed that the places guide dog owners are most often refused access to are minicabs, taxis, restaurants and shops.

During a one-year period, 42 per cent of assistance dogs owners were refused entry to a taxi or minicab because of their dog, while 22 per cent said a minicab or taxi drove off without speaking to them, the research showed.

An Uber driver was convicted of breaching the Equality Act after he refused to give a ride to a blind man’s guide dog at Watford junction station, Hertfordshire, in June 2019.

Footage showed Mohammed Hafiz Raja saying ‘I ain’t going to take your dog’ before driving away in his blue BMW.

Colin Perreira, 24, from Hemel Hempstead, and his six-year-old guide dog Sid had booked a ride to his father’s home in King’s Lynn, six miles away. It marked the fifth time Colin had taken an Uber driver to court.

Raja, from Watford, was fined £1,700 at Westminster magistrates’ court last year. He was also been banned from offering rides through the app.

Uber said in a statement that Raja’s behaviour was ‘totally unacceptable’.