Two gunmen were shot dead by the brother of South African rugby legend Joost van der Westhuizen as they tried to rob a congregation during a church service.

The two robbers were killed and a third was possibly wounded when they stormed into the Querencia Ministries church in Wierda Park, Centurion, South Africa, on Sunday.

They then proceeded to try and rob members of the congregation at gunpoint. 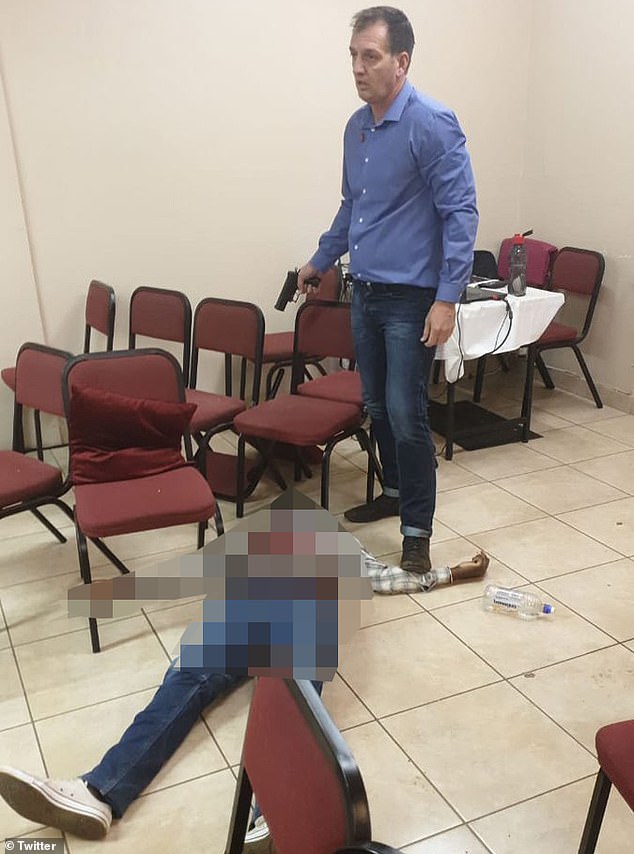 Pieter van der Westhuizen is pictured next to one of the robbers he shot dead at Querencia Ministries church in Wierda Park, Centurion on Sunday

Joost van der Westhuizen, 45, made 89 appearances in test matches for the national team, scoring 38 tries and participated in three Rugby World Cups. He died in 2017 after being diagnosed with motor neurone disease.

Ruan Heyns of the Community Emergency Response Team said that Pastor Kobus Erasmus and other worshippers were pushed around and pistol-whipped by the men.

At one point one of the robbers reportedly held a pistol to Erasmus’ head.

A 15-year-old boy was also reportedly grazed by a bullet.

Ulrich Roux who is acting as Van der Westhuizen’s attorney has said his client acted in self-defence when he used the weapon to shoot the attackers.

Van der Westhuizen – a former police officer himself – is co-operating with the police investigation.

Brigadier Mathapelo Peters from the police said that three men entered the church and robbed churchgoers of their personal belongings, before a congregant opened fire and killed two of them inside the place of worship.

The third managed to escape in a getaway car after being shot at.

‘The pastor sustained minor injuries and was treated on site,’ Peters said.

Springbok superstar Joost van der Westhuizen was widely regarded as one of the greatest scrum-halves in the sport’s history.