Three dead in 2am fireball crash: Two women and a man are killed as car flies off A38 dual-carriageway and hits tree

Two women and a man have died in a horror fireball crash after their car ploughed into a tree along a dual carriageway and burst into flames.

Emergency services were called to the single vehicle smash on the A38 near Alfreton, Derbyshire, at around 2.15am on Saturday.

Police said the silver Ford Focus was on the southbound carriageway when it left the road and hit a tree before catching fire. 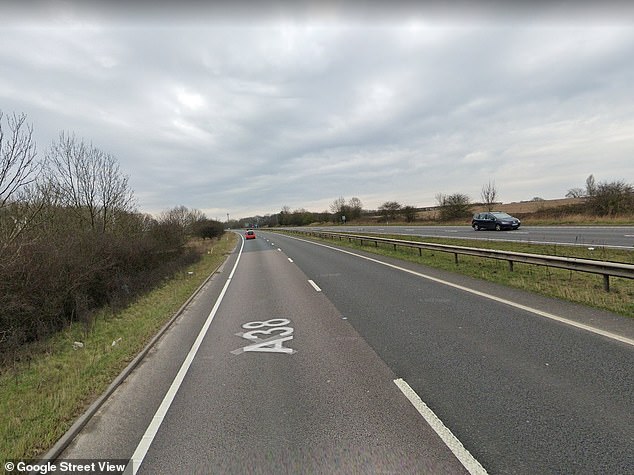 Emergency services were called to the single vehicle smash on the A38 near Alfreton, Derbyshire, at around 2.15am on Saturday

Two women and a man were tragically pronounced dead at the scene while another man and a woman were rushed to hospital with serious injuries.

The injured male victim is currently fighting for his life in a critical condition while the woman is described as being in a stable condition.

A Derbyshire Police spokesperson said: ‘Three people have died and two people seriously injured following a collision on the A38 in the early hours of Saturday morning.

‘Emergency services were called to the incident, which involved one car, at around 2.15am.

‘The car, a silver Ford Focus, was on the southbound carriageway of the A38, near to the exit for the B600 at Somercotes, when it left the road and collided with a tree.

‘Two women and a man died at the scene. Their families are aware and are being supported by specially trained officers.

‘Our thoughts are with them at this most distressing of times.

‘A man and a woman were taken to hospital with serious injuries. They both remain in hospital, the man in a critical condition and the woman in a stable condition.

‘Officers would like to hear from anyone who may have witnessed the crash or noticed the car, which had been travelling southbound on the M1 before the collision.

‘We would particularly appeal for anyone with dashcam or CCTV footage which could help with our enquiries to get in touch.’

National Highways tweeted at the time: ‘The A38 is closed south between the M1 J28 and the B600 near Alfreton due to serious collision and car fire.

‘Emergency services including @DerbysPolice are on scene along with Traffic Officers. The road is expected to remain closed for several hours.’

Anyone with information can contact the force on social media, online at https://bit.ly/3KmIKzU or by calling 101.