Ditching dark roofing across Sydney will lower the city’s summer ambient temperatures by up to 2.4 degrees, according to University of NSW research commissioned by the federal government.

A switch to cool-roofing options as simple as a coat of white paint could also drive down indoor temperatures in uninsulated homes in western Sydney by an average of 4 degrees, and 10 degrees during heatwaves, making them potentially life-saving measures. 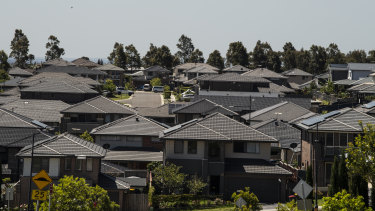 Doing away with dark roofs could reduce Sydney’s ambient temperatures by an average of 2.4 degrees.Credit:Louise Kennerley

The study, which is being replicated for every major Australian city, will help drive the Commonwealth’s policy on low-energy and more climate-friendly cityscapes as it works toward net-zero emissions.

Professor Mat Santamouris, from UNSW’s School of Built Environment, said the comprehensive study of 17 building types, from low-lying residential to shopping centres, showed that ridding the skyline of dark roofing would also reduce energy consumption by 30 per cent, and in some circumstances, 40 per cent.

“This is extremely high,” said Professor Santamouris, the lead author on the report, which also involved contributors from India, Greece and the US.

A Department of Industry, Science, Energy and Resources spokesperson said the UNSW study will help ensure “transparency and knowledge sharing about cool roof technologies and the costs and benefits of their use under different conditions”. 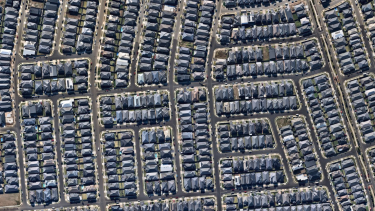 The spokesperson said the government would support “voluntary” measures to create more environmentally sustainable buildings. Other areas in the world, including California, have cool roofing requirements in their building energy codes.

The move to lighter-coloured roofing has been welcomed by urban heat experts but branded as “low-hanging fruit” in terms of regulatory change towards dealing with climate change.

Property Council of Australia Western Sydney regional director Ross Grove said that while the industry group didn’t have a specific position on roof colours, “we do support the promotion of building materials with lower solar absorbance to address the heat impact”.

While the cost-benefit ratio is still being worked out, Professor Santamouris said that when taking in the breadth of buildings, between small homes and large apartment blocks, the average cost of converting to cool roofing would be repaid through lower energy bills within five years.

UNSW is developing materials that reflect rather than absorb solar energy, however Mr Santamouris said the study had been used with conventional materials that could be bought at department stores, such as highly reflective paint, tiles and shingles.

He said converting the built landscape with cool roofing could also decrease the severity of energy poverty – a lack of access to affordable and efficient household energy – in areas such as western and south-western Sydney.

“For example, in Penrith, during a heatwave, the temperature may be higher than 50 or close to 50 [degrees], the use of cooler roofing such a building may decrease the indoor temperature up to 10 degrees.”

In Sydney, 391 people suffered heat-related deaths in 2020, a figure expected to rise to 1015 in 2050, according to federal government data.

He said the reduction of ambient temperatures across metropolitan Sydney, which could be as much as 2.4 degrees over summer, was calculated to be on average 1.7 degrees.

Professor Santamouris said that lowering the surface temperatures of a large metropolitan area acted to decrease the penetration of desert winds increasing the heat in western Sydney by decreasing the planetary boundary layer, the atmospheric zone where air is circulated.

Get a daily update on the climate summit that will shape our future. Sign up to our Clear Air newsletter here.