Even with conditions improving in Texas and other winter weather-stricken swaths of the South, residents are still dealing with food and water shortages as forecasts look warmer and utility companies have restored power to millions.

Photos taken at a Walmart outside San Antonio show rows of empty refrigerated and frozen shelves, where perishable food would normally appear. A Dallas family ran a duct from their car into the house to keep it heated facing below-freezing temperatures Wednesday.

In Houston, photographs showed residents sleeping in a mattress store that reopened as an emergency shelter earlier this week. 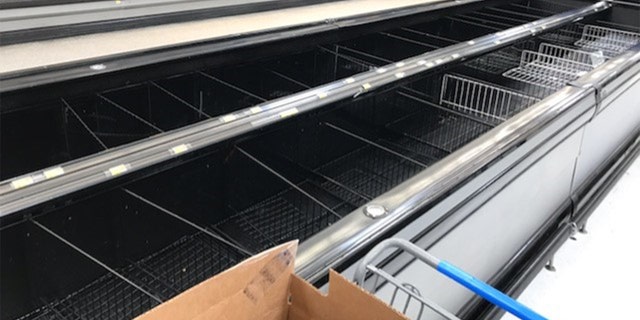 Empty shelves in a Walmart near San Antonion.
(FOX)

Officials there were handing out bottled water to help out amid “overwhelming demand.”

Nearly half of Texas’ population was instructed to boil water before drinking it after the icy weather disrupted water treatment facilities. Hundreds of thousands of residents in other affected states were under similar advisories.

And the Memphis International Airport cancelled all flights Friday due to problems with its water pressure. 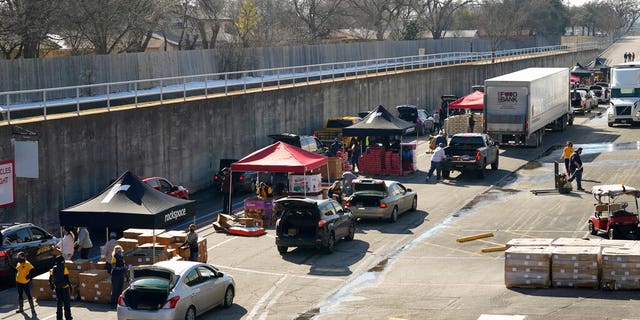 And as temperatures climbed this week, the National Weather Service’s Houston office warned residents to beware of falling icicles and chunks of snow.

As of Friday evening, there were about 137,000 homes without power reported across Texas, according to PowerOutage.us. That’s down from more than 4 million earlier this week.

The Electric Reliability Council of Texas, or ERCOT, was urging customers to continue to conserve energy after their lights came back on. 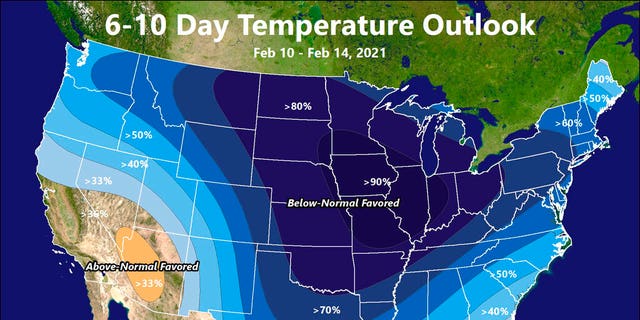 This illustration made available by the National Weather Service on Thursday, Feb. 4, 2021 shows a Feb. 10-14 forecast for below-normal temperatures for large parts of the United States. The mid-February killer freeze was no surprise and yet catastrophe happened. Meteorologists, government and private, saw it coming, some nearly three weeks in advance. They started sounding warnings two weeks in advance. They talked to officials. They tweeted and used other social media and were downright blunt. (National Weather Service via AP)

Biden said he was declaring states of emergency in Texas, Oklahoma and other areas affected by the winter weather and ordered FEMA to send generators and other supplies. He was also considering activating other federal agencies as part of the relief effort. 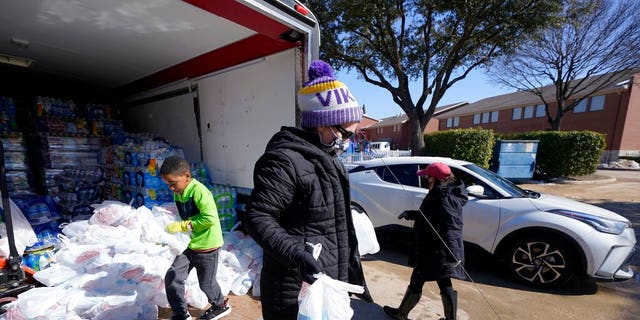 Marny Tackett, front, recreation superintendent with the City of Plano, Josiah Prince, left, and Rebecca Hand, right, Volunteer Resources Coordinator with the City of Plano, hand out water to waiting vehicles at Grace Church in Plano, Texas, Friday, Feb. 19, 2021. In cooperation with the city, the church staff, volunteers, and city representatives have been handing water to those who have had their water shut off or pipes damaged in their homes as a result of the winter storm. (AP Photo/Tony Gutierrez)

The weather also delayed 6 million coronavirus vaccine appointments across the country, according to the White House, with hundreds of thousands of them in Texas alone.

The weather had been blamed for at least 69 deaths across the South as of Friday evening.

Temperatures were expected to drop below freezing again overnight Friday, according to the National Weather Service — but lows are expected to climb above freezing by Saturday.