DETERMINED to reach Britain: Sudanese migrants in France say they will NEVER give up trying to cross Channel despite up to TWENTY failed bids in lorries and boats… because the French ‘don’t want them’

Migrants have declared they will never give up in their desperate quest to reach the UK even after seeing one of their own peers drown in the process.

MailOnline spoke to several migrants who came from the former war zone of Sudan where civilians were massacred.

Some said they had been arrested and taken off lorries handcuffed at the Calais Ferry port ‘many times’, but would never give up. 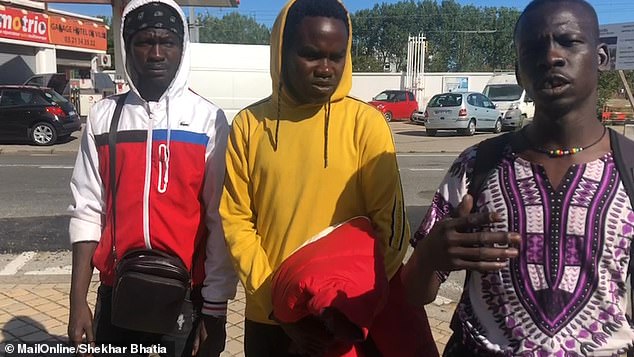 One even admitted he had ‘a small boat buried’ under the sand at the same Sangatte beach where the body of the tragic victim was washed up yesterday. 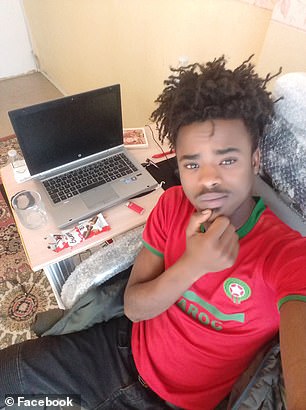 Abdulfatah Hamdallah, who has been revealed as 28, and not 16 as initially thought, slept rough in France for two months before his desperate bid to cross the Channel

Mohammed Ameen, 29, said he had hidden the small dinghy ready to be unearthed at a time when French police were nowhere to be seen and under the cover of darkness he would attempt to cross the channel safely.

He added: ‘No worries for me. I have to go to England because the French people do not want us.

His friend Ahmed Ibraham, 27, who has been a migrant for six years, said: ‘I have to go to England

‘France is very bad. People don’t give you work and I don’t have anything here. We don’t have rights.

‘I want to leave France and go to England, this is my dream. 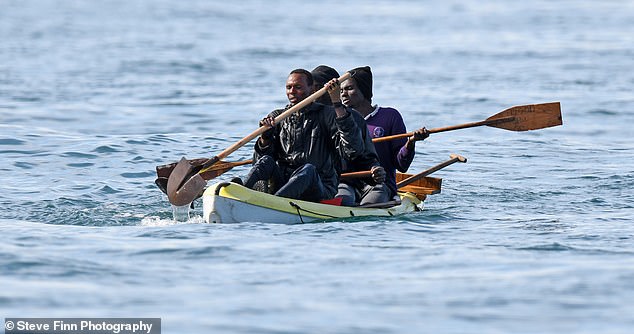 Abdulfatah Hamdallah is thought to have died within a few minutes of entering the water, while a friend who was with him survived with minor injuries and hypothermia. Pictured, one migrant uses a shovel as an oar while making the crossing in July 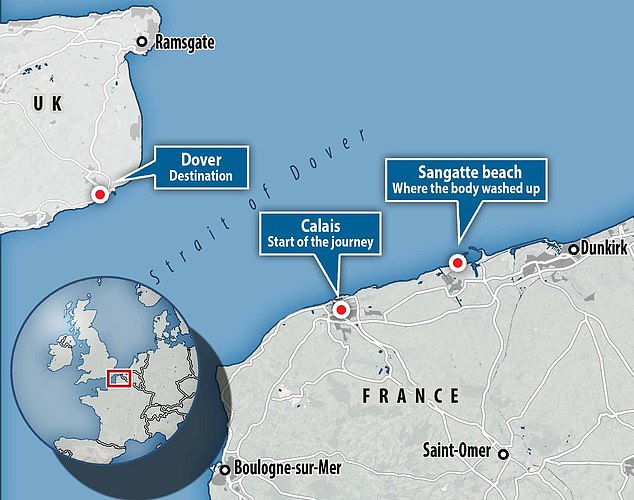 He and his friends sleep rough, spending nights in a small park close to Calais City Hall.

The notorious Calais ‘Jungle’ camp was shut down around four years ago, leaving around 1,000 men stranded and dreaming of reaching Dover.

They were aware of the tragedy yesterday when a Sudanese national drowned after leaving Sangatte in a rubber dinghy, but would not be put off.

The dinghy was punctured and capsized. Unable to swim, the man’s body was washed up almost at the place where he and a friend departed. 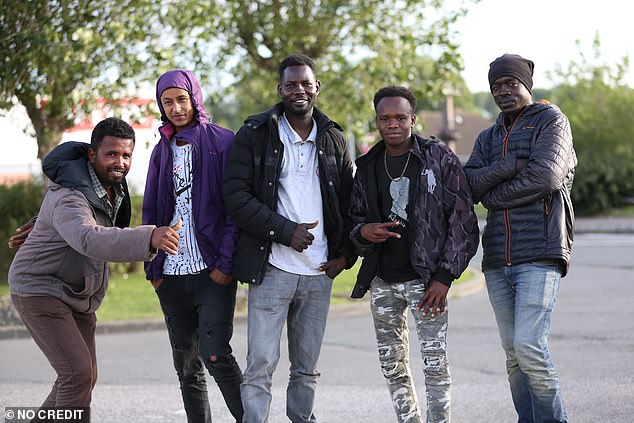 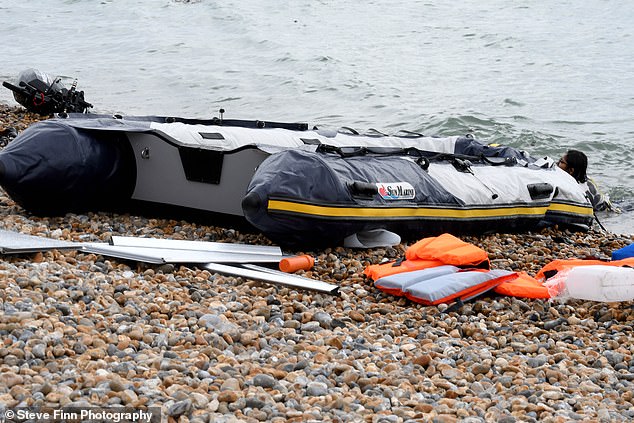 A boat that landed in Sandgate, Folkestone and Hythe, Kent, on Thursday, containing approximately nine people thought to be migrants who fled and were later found by officials 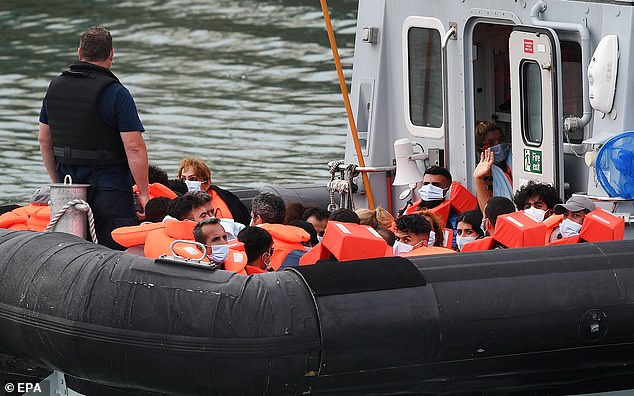 A Border Force vessel brings in migrants found off the coast of Dover in Kent on Thursday. Britain and France are continuing ongoing talks to try to resolve the migrant crisis in the Channel

His companion, also Sudanese, survived and was being treated in hospital today after raising the alarm after managing to swim back.

French Gendarmerie stepped up their patrols of the beaches bordering Calais today, but locals said they could not enjoy total success in stopping the migrants crossing the busiest shipping channel in the world.

One said: ‘There are so many young men who only want to go to England. They know they will get a home and food and money. They are not foolish.’

Ahmed, a mechanic who stayed in a camp for 16 months and also sought refugee status in Holland, added: ‘We know of this boy who died. I don’t know him, but there are many like him who will go to England.’ 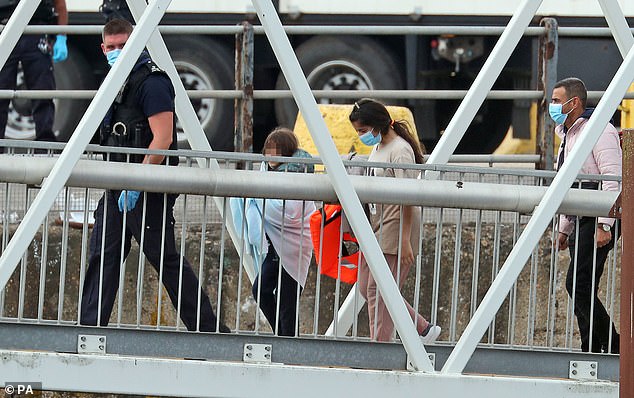 A group of people thought to be migrants are brought into Dover, Kent, following a number of small boat incidents in the Channel on Thursday

He said he would carry out his own attempt ‘because here I do not have a life.

‘Every day I see England from here. It is close I must go. I am not scared because there is no life in Sudan and France.’

Another Sudanese Ibrahim Mohammed, 29, from Darfur, left Sudan eight years ago and was smuggled across the Sahara to Libya, Italy and into Norway who booted him out.

‘I want to go to England because Sudan is so violent.’

Referring to the latest boat tragedy, Ibrahim who cannot swim, said he would also cross the channel eventually.

He added: ‘It is a difficult situation, but what should I do?’

Hundreds of men from the African sub-continent remain in the French coastal town aiming to get to Britain. They sleep rough and are helped by charities like the Red Cross who today mingled with them giving them free phone calls to their families.

Abdulfatah Hamdallah, from Sudan, died after the 3ft dinghy he and a friend were in was punctured by the shovels they were using as oars.

His friend somehow survived, but Mr Hamdallah, who is 28, and not 16, as initially thought, could not swim and his body was later found washed up on a beach at Sangatte.

He is thought to originally be from the town of En-Nahud, around eight hours south of Sudanese capital Khartoum.

It has since been revealed Mr Hamdallah had been playing football with fellow migrants in a field only 48 hours before his fateful attempt to cross the English Channel – one of the world’s busiest shipping lanes. 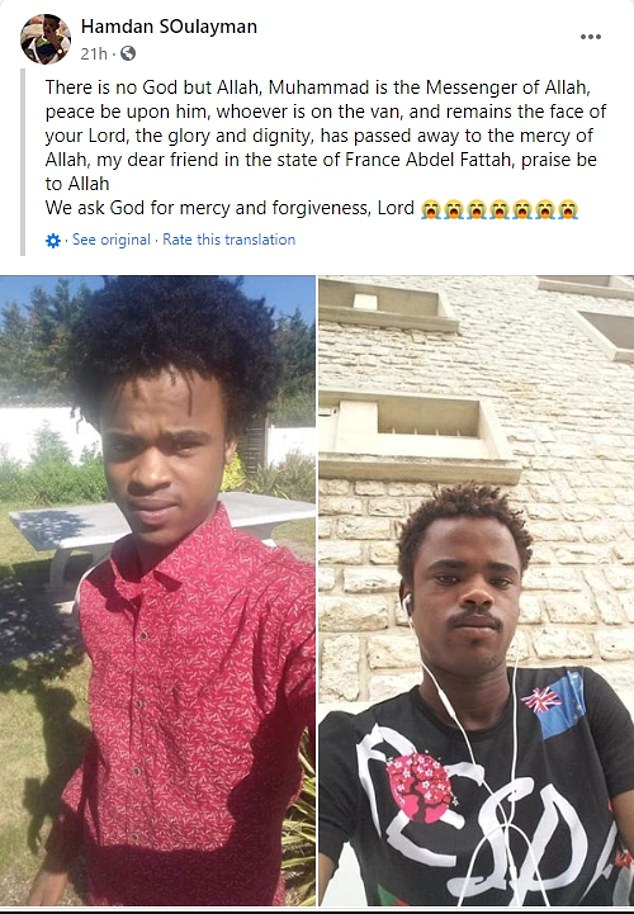 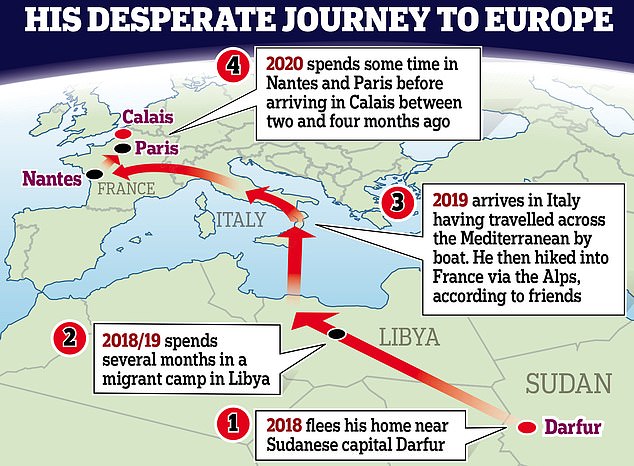 Friends said he dreamed, like them, of reaching England and obtaining acceptance in contrast to what they said was hostility in France

Friends at a makeshift camp he stayed at in Calais have shared images of the former student with MailOnline in the hope of highlighting the human cost of the crossings crisis.

The friends said he dreamed, like them, of reaching England and obtaining acceptance in contrast to what they said was hostility in France.

Yesterday, in a tribute, one friend said on Facebook: ‘There is no God but Allah, Muhammad is the Messenger of Allah, peace be upon him, whoever is on the van, and remains the face of your Lord, the glory and dignity, has passed away to the mercy of Allah, my dear friend in the state of France Abdel Fattah, praise be to Allah

‘We ask God for mercy and forgiveness, Lord.’