Sources close to the First Minister branded the Greater Manchester mayor ‘incoherent and absurd’ after they met on Wednesday night for talks.

The leak to the media prompted a backlash from Mr Burnham, who accused the SNP of leaking the details of what was meant to be a private head-to-head.

A source close to Sturgeon said Mr Burnham had been unable to respond at the meeting when she pointed out that Greater Manchester’s official website tells visitors to ‘minimise travel in and out of affected areas’.

‘The first minister pointed out the stark contradiction between what Andy Burnham has been saying in recent days and his own authority’s clear advice to ”minimise travel’,’ they told the Telegraph.

‘Burnham had no proper answer to that. His attempted explanation was incoherent and absurd.’

But Mr Burnham publicly attacked the leak, tweeting: ‘And there was me thinking they (the talks) were confidential …’

Mr Burnham had previously branding Ms Sturgeon a ‘hypocrite’ for allowing thousands of Scots to head to London for the Euros while blocking arrivals from Manchester.

She had responded by accusing him of posturing as part of his desire to replace Sir Keir Starmer as Labour leader. 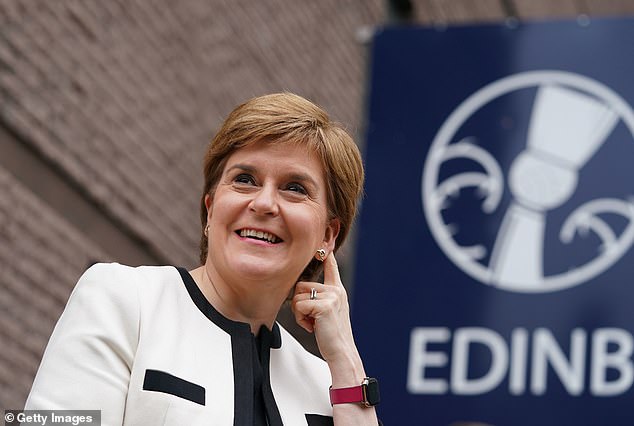 Sources close to the First Minister branded the Greater Manchester mayor ‘incoherent and absurd’ after they met on Wednesday night for talks. 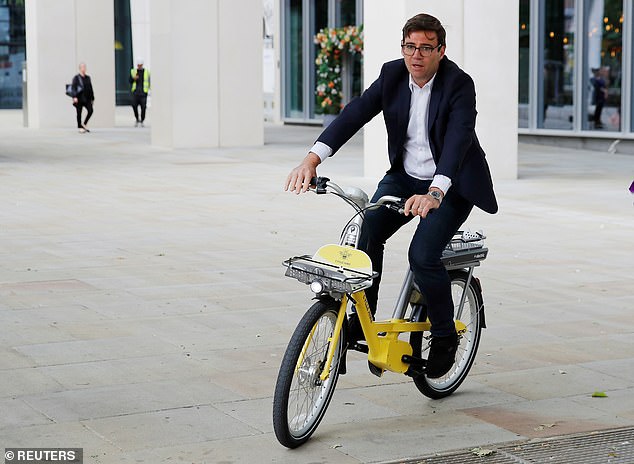 Mr Burnham said on Tuesday that he would be seeking a ‘political route’ to end the dispute, following a decision taken by the Scottish Government in the face of Manchester’s rising infection rate. 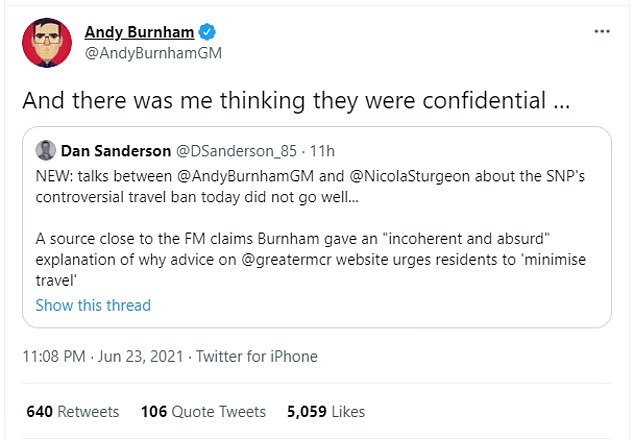 The leak to the media prompted a backlash from Mr Burnham, who accused the SNP of leaking the details of what was meant to be a private head-to-head.

It came as budget flight operator easyJet has confirmed it will not go ahead with new routes connecting Manchester to Edinburgh and Aberdeen following the travel ban.

The Manchester-Edinburgh route was due to take just 65 minutes and replace a service lost when Flybe ceased operations in March 2020.

Mr Burnham claimed over the weekend that the ban was imposed without consulting Greater Manchester authorities, adding it was hypocritical of the Scottish Government which he claims regularly complains of being steamrolled by Westminster.

The Scottish Government was also rebuked by Holyrood Presiding Officer Alison Johnstone on Tuesday for not announcing the ban to MSPs but instead in a written question, despite the Scottish Parliament sitting when the announcement was made.

Scotland Office minister Iain Stewart has urged the pair to resolve the ‘not satisfactory’ situation.

Mr Stewart told the Commons: ‘The issue between the mayor of Greater Manchester and the First Minister is clearly not satisfactory and I’d urge them both to come to a very sensible arrangement to allow travel to resume between Scotland and Greater Manchester.’

‘We can’t continue like this and urgently need help and a plan that sets out how we can work towards the safe restart of travel.’

The issue was discussed during Scottish Questions in the House of Commons yesterday.

Conservative MP Andrew Bowie, who represents West Aberdeenshire and Kincardine, said: ‘As a direct result of the baffling and inconsistent travel ban placed on Scots going to Greater Manchester, easyJet have cancelled their newly-announced route from Aberdeen to Manchester, putting at risk many jobs in the North-East of Scotland.’

He asked what the minister and the Scotland Office were doing to ensure that ‘when it comes to international travel and reopening, the same rules will apply around the entirety of the UK, instead of leaving the Scottish aviation sector… at the mercy of the Scottish Government, who completely abandoned them?’.

He added: ‘[The travel ban] has been widely criticised as disproportionate… and there are clearly calls particularly for this particular regulation to be reviewed and in closer consultation with all interested parties.’