Wildcat strikes, walkouts and protests over working conditions have erupted across the US throughout the coronavirus pandemic as “essential” workers have demanded better pay and safer working conditions. Labor leaders are hoping the protests can lead to permanent change.

Norma Kennedy, an employee at an American Apparel clothing plant is one of those people. Kennedy along with dozens of other workers walked off her job in Selma, Alabama, on 23 April after two workers tested positive for coronavirus. The plant has remained open during the pandemic to manufacture face masks for a US army contract.

“We left for our own protection,” said Kennedy. “Beforehand, management said if someone tested positive they would shut down and have the plant cleaned. When workers tested positive, they didn’t want to shut it down. They’re not really concerned about the workers.”

Working conditions, low pay and lack of safety protections have triggered protests throughout the pandemic as workers across various industries, including food service, meat processing, retail, manufacturing, transportation and healthcare have come together to protest about issues, many of which were apparent before the coronavirus.

“There are no federal mandates or requirements to implement the social distancing guidance or anything else. It’s only guidance and employers can choose to implement them or not,” said Deborah Berkowitz, director of worker safety and health for the National Employment Law Project. “And that is why, in an unprecedented way, they are walking out to bring public attention to the fact that their companies are not protecting their safety and health.”

Roberto Echiveste, a truck driver in El Paso, Texas, for 10 years, was one of hundreds of drivers who joined in a protest convoy through El Paso on Friday 1 May. During the pandemic, Echiveste and other drivers have seen their freight rates drop from $2-$2.50 per mile to as low as $0.50 per mile. 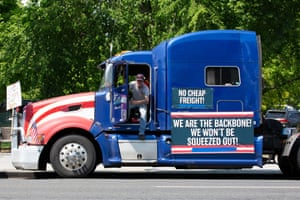 “I’m losing money just to work. The last week I worked I paid $200 out of my own pocket just to get home,” said Echiveste. “I have to pay to work and truck brokers are keeping most of the cut. We have to pay on average $500 each time we fuel, insurance is around $1,000 per month, and parts for my truck are three to four times more expensive than a regular car part, and some drivers are still paying for the truck and trailer. On that alone, I pay over $2,300 per month.”

Echiveste said the protest was coordinated on Facebook, and he joined it with his brother, father and neighbor who are all truck drivers.

Fast-food workers with the Fight for $15 and a union campaign have organized one-day strikes and protests in California, Illinois, Florida, Missouri and Tennessee through the pandemic.

Ieshia Townsend, a McDonald’s worker in Chicago for five years, participated in one of the strikes and walked off the job in protest of lack of hazard pay, proper personal protective equipment, paid sick leave and lack of health insurance benefits.

McDonald’s dismissed the strikes as “limited activity” and noted they are granting 10% of pay earned in the month of May in bonuses to workers at corporate owned stores, which make up only 5% of McDonald’s restaurants. 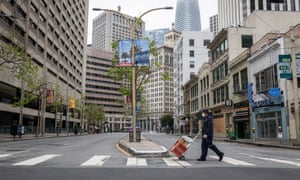 On 29 April, Braden Lauder, a shift manager for one year at an Arby’s in Morris, Illinois went on strike with co-workers over the lack of hazard pay, lack of personal protective equipment, and understaffing.

“We’re understaffed, underpaid and underappreciated,” said Lauder. He makes $12 an hour as a shift manager, and noted several of his co-workers make under $10 an hour. “At the same time, I’m a shift manager so I do the paperwork for the sales that we pull each day and I know for a fact that we’re busier now than we have been at any other point since I started almost a year ago.”

Arby’s did not comment on the lack of hazard pay. “The safety of our team members and guests continues to be our top priority. This was an isolated incident that occurred at a franchised location, and we understand from the owner that all parties are engaged in an open dialogue,” said an Arby’s spokesperson.

On 11 May, more than 100 Uber drivers in San Francisco held a caravan protest outside Uber headquarters following the company’s virtual stockholder meeting to demand Uber drop funding for a ballot initiative to repeal Assembly Bill 5 (AB5), which took effect on 1 January 2020.

AB5 classifies drivers as employees, granting drivers rights such as minimum wage and access to unemployment and workers’ compensation benefits. Uber has devoted spending at least $30m on the ballot initiative to repeal the law.

“We feel that money could be used to support drivers during this crisis,” said Mekela Edwards, an Uber driver in the San Francisco, California, area for about one year. “This crisis, personally for me, just showed me how vulnerable I am as a driver.”

Edwards has been unable to work due to her doctor directing her to self-isolate during the pandemic. It took several weeks before she began receiving unemployment benefits and has yet to receive a response to her application for paid sick leave from Uber.

“I applied, I submitted the doctor’s note, filled out the application, submitted my paperwork and have still not heard from Uber at all,” Edwards added.

Uber and American Apparel did not respond to multiple requests for comment.

Sharon Block, executive director of the Labor and Worklife Program at Harvard Law School, said it was too early to tell if these worker actions around the US will have a lasting impact.

“These walkouts show that essential workers don’t want to be treated any more as if they were disposable. They are demanding a voice in how their companies respond to the pandemic. Having a voice is a life-and-death matter now more than ever,” said Block. “Success will be a matter of whether consumers and policymakers will be inspired by these workers’ courage.”