Tragic story of British soldier, 16, who was killed in action after lying about his age to join D-Day landings is revealed ahead of invasion’s 76th anniversary

The tragic story of the youngest British soldier to die after taking part in the D-Day landings has emerged on the eve of the 76th anniversary of the event.

Fearless Jack Banks lied about his age to enlist in the British army telling them he was 18 when in fact he was just 15.

He was among the first wave of soldiers to land on Gold Beach as part of Operation Overlord in June 1944.

The teenager from Darwen, Lancashire, survived the initial onslaught and by July his regiment, the Durham Light Infantry, had advanced around 20 miles into France. 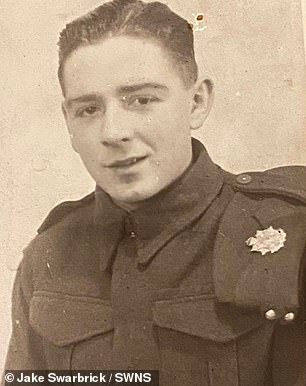 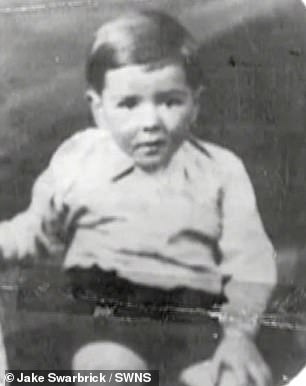 Jack Banks after enlisting in the British Army, left, and as a young boy, right. He lied about his age to enlist in the Army, saying he was 18 when he was actually just 15

After six weeks of fighting the heroic young man volunteered when his battalion was tasked with taking out an enemy machine gun post inside a farmhouse near Caen.

Jack and two friends were armed with grenades and sent in but were tragically struck and killed by enemy mortar fire in the line of duty. Jack was then just 16.

His grave, alongside his two comrades’, can be seen today in the Commonwealth War Graves Commission’s Jerusalem War Cemetery in Chouain.

The heartbreaking engraving on his headstone, chosen by his parents Fanny and Jack, reads: ‘God will tell us why, some day, he broke our hearts and took you away.’

Jack’s great nephew, Jake Swarbrick, 29, a corporal in the British Army, says he joined the services aged 18 after being ‘inspired’ by stories of his great uncle.

He said: ‘Jack is very much still a huge part of our family, all of us are well aware of his incredible story and sacrifice.

‘My grandma, Jack’s sister, often told me the story as I was growing up and it’s one that really stuck with me. Jack a large part of the reason I joined the army myself, he inspired me.’

Dad-of-one Jake added: ‘Sadly my grandma has passed away now but Jack’s story is one that I will definitely keep telling. 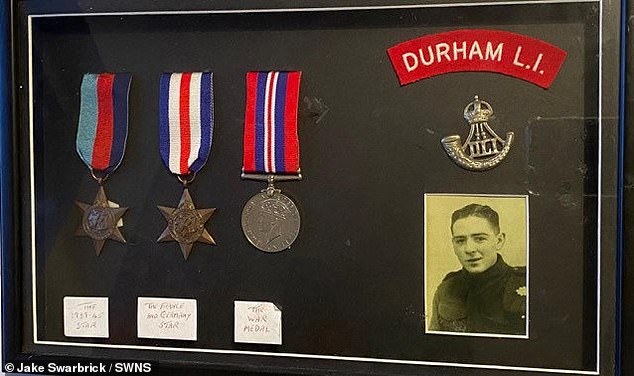 Banks’ medals. His great nephew, Jake Swarbrick, 29, a corporal in the British Army, says he joined the services aged 18 after being ‘inspired’ by stories of his great uncle 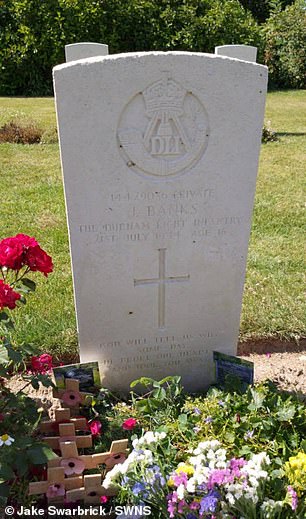 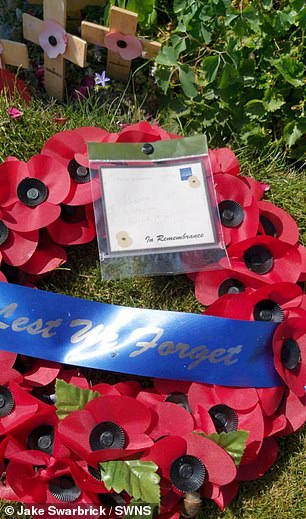 Jack Banks’ grave, left, and a poppy wreath place in remembrance, right. He was born to parents Fanny and Jack in Darwen in 1928. After the war started he was determined to enlist

‘My six-year-old son already knows all about it and I’m planning on taking him to the grave in Normandy.’

Jack, the oldest of five children, was born to parents Fanny and Jack in Darwen in 1928. After the war started he was determined to enlist.

He lied to the army about his age and defied his parents’ wishes in order to sign up with the Durham Light Infantry. He was only 15.

Fanny vowed if her boy was over posted overseas she would tell the authorities his true age and have him withdrawn.

However, before she ever had the chance Jack was assigned to the Durham Light Infantry’s 8th Battalion and sent to Normandy. At 11.30am on D-Day the 8th Durhams landed on Gold Beach.

Jack, who was a private, and two fellow serviceman stepped up but were struck by mortar fire as they sought to carry out the daunting task. 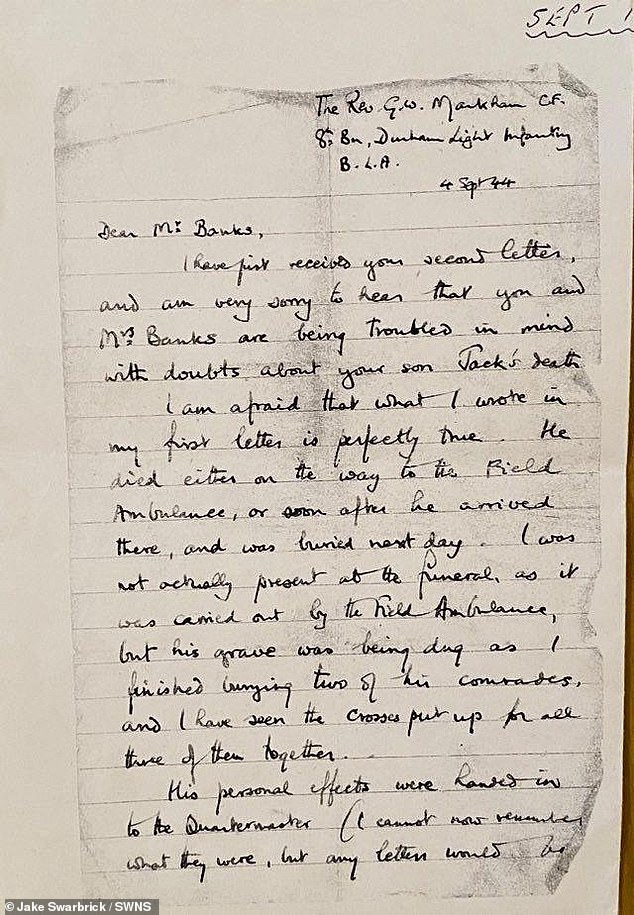 The letter from the front informing Jack’s parents of his death. His mother, Fanny, never claimed her boy’s medals because the prospect was too upsetting 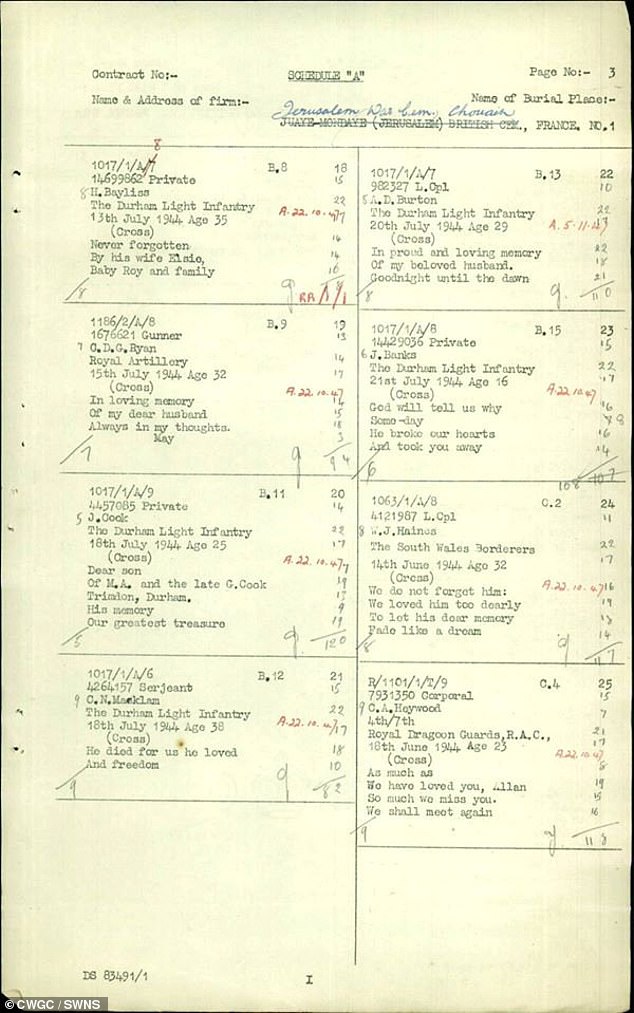 The original headstone schedule from the CWGC Archive. Fanny had a black vase engraved for his headstone in anticipation of the return of Jack’s body, which never arrived

He was seriously injured and taken for treatment but died on July 11, 1944.

A chaplain at the front handled Jack’s body and faced the unenviable responsibility of writing to Fanny and Jack to inform them of their son’s death.

The Reverend Canon Gervase W. Markham wrote: ‘Dear Mr Banks, I’m afraid this letter is bringing you some very sad news. Your son was mortally wounded and died in a field ambulance.

‘He has been buried with two other men and a white cross has been erected. The graves are being well cared for.

‘It must be a great blow for you I’m afraid but you have the pride of knowing that he gave all he had. No man can do more. May God give you strength to face the future bravely.’

Fanny never claimed her boy’s medals because the prospect was too upsetting.

She had a black vase engraved for his headstone in anticipation of the return of Jack’s body, which never arrived. She would fill it with fresh flowers every week in his memory.

The Commonwealth War Graves Commission are now using Jack’s story as part of their efforts to engage the next generation in remembering the war dead.

A spokesman said: ‘In telling the story of a 16 year old lad whom we commemorate in one of the most lovely cemeteries we have in Normandy, we can break down the barriers of time and statistics to humanise the story of D-Day and its immediate aftermath and help an audience that may be the same age as Jack understand the price of that liberty.’