Lima: He was an unlikely presidential candidate, a rural teacher who for the past 25 years has seen his students struggle in crumbling schools where teachers also cook and sweep floors.

But socialist Pedro Castillo is holding on to a narrow lead in Peru’s run-off presidential election, and worrying markets and mining firms with his plans to shake up the copper-rich country’s politics. He has promised a tax overhaul to address inequalities.

His slim lead of 50.3 per cent, ahead of right-wing rival Keiko Fujimori on 49.7 per cent, with almost 98 per cent of the votes tallied, sparked tensions over contested ballots and accusations of fraud, which in turn sparked protests outside the elections office. 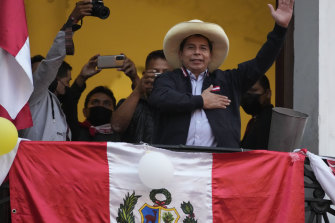 A preliminary count was likely to end on Thursday AEST, although about 300,000 votes have been contested and will need to be reviewed by an electoral jury, which will take days to resolve.

It is unclear whether those contested votes will be enough to swing the election in favour of Fujimori, one of Peru’s most established political figures and the daughter of former authoritarian president Alberto Fujimori who is serving a 25-jail sentence for human rights and corruption crimes. It is her third attempt to become president.

On Monday, Keiko Fujimori made unsubstantiated accusations of fraud, adding fuel to an already tense situation, and publicised a hashtag for Twitter users to submit instances of what she called “irregularities”. 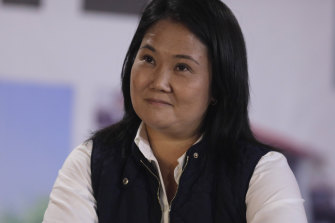 Electoral experts, including international observers, said no fraud had been observed, but that did not stop people from staging protests.

“We are protesting because of the flagrant electoral steal. The [elections office] is playing in favour of Mr Castillo, they are trying to commit fraud in his favour,” said Fernando Tavera, a pro-Fujimori protester outside the elections office. 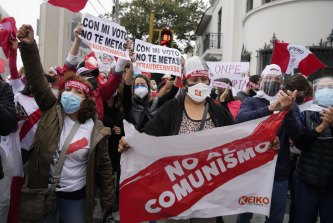 Supporters of presidential candidate Keiko Fujimori hold a banner reading “No to communism” and “fraud”, outside the official vote council office, in Lima.Credit:AP

Castillo backers also flocked to the elections office to voice their support in counter-protests. Both sets of demonstrations were peaceful.

Lourdes Morales, who supports Castillo, said, “We think it’s a scandal the way [Fujimori] has increased her voting numbers,” referring to how the conservative had slowly narrowed the gap on Castillo for most of the day. “And that generates uncertainty,” she said.

Lima is where Fujimori has the most support. Castillo, the son of peasant farmers, had surged late in the count as more of the rural vote came in, leading by more than 100,000 votes at one point. However, buoyed by votes cast overseas, Fujimori began to gain ground again.

Fujimori, the scion of a powerful political family, said she held out hope of closing the narrow gap on Castillo. 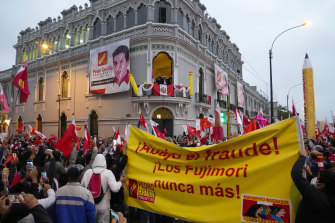 Markets in the world’s second-biggest copper producer, after Chile, wobbled for a second day, after dipping forcefully on the expectation that Castillo would win. The stock exchange fell 0.74 per cent, although the local currency, the Sol, strengthened 0.33 per cent.

The drama has left Peruvians glued to media as they watched the tally.

There are some 1385 contested actas, or voting tables, which is likely to equate to some 300,000 votes. They are set to be counted by a special committee set up by the electoral board, which could take at least a week.

If Castillo wins, investors will be looking to see whether he reaches out to calm the country following the divisive election, and what his early messaging is on economic policy direction and the investment outlook, Goldman Sachs said.

Castillo has promised to redraft the constitution to strengthen the role of the state and take a larger portion of profits from mining firms. Fujimori has pledged to follow a free-market model and maintain economic stability in Peru.

“The [market] reaction to Peru is pretty muted,” he said. “For a start maybe we got trapped in the narrative that it was a binary choice […] Maybe from a political point of view it is, but from a real economic perspective it doesn’t seem to be.”