‘He’s only in it for the photo op!’ Sir Keir Starmer under fire after he is caught asking camera crew ‘have you got what you need’ while taking part in national clap for NHS

New Labour leader Sir Keir Starmer has caused uproar on Twitter after asking the media ‘have you got everything you need’ at the end of the 8pm ‘clap for our carers’.

He took part in the weekly NHS appreciation gesture on a live Sky News broadcast but stopped very abruptly at the end of the clap and was keen to head back indoors.

He was joined by his wife Victoria Starmer and they both stood outside their house this evening to take part in the one minute clap. 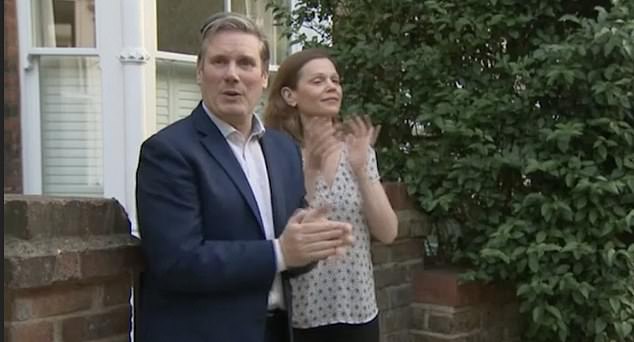 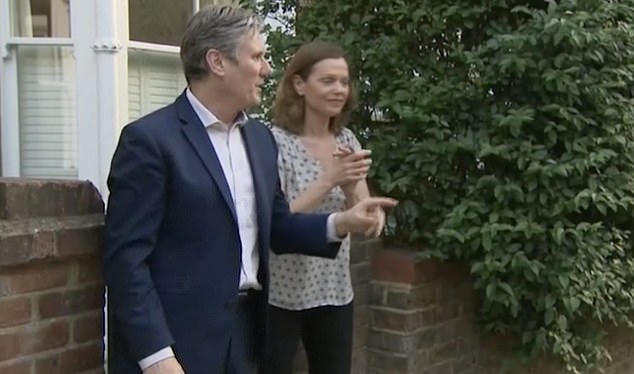 People on Twitter were furious at his actions and claimed he was just using the clap for a ‘photo opportunity’ and said the whole incident was a ‘PR nightmare’.

One Twitter user said: ‘Keir Starmer saying “have you got what you need” to the cameraman at the end of the minute clap… lol says a lot.’

Another said: ‘Ha. Keir Starmer “clapping”, turns to reporter “have you got what you need?” Then stops. Forgetting camera is still on him. Smarmy b*****d obviously just clapping for the cameras. Either do it or don’t (I don’t anymore) but don’t f***king pretend.’

He was joined by other politicians, including Prime Minister Boris Johnson, in clapping for the NHS as Britain enters their sixth week in lockdown amid the coronavirus crisis.

This comes after Keir Starmer has suggested lockdown must stay in place until UK testing capacity is much higher – after daily numbers slumped below 100,000 again. 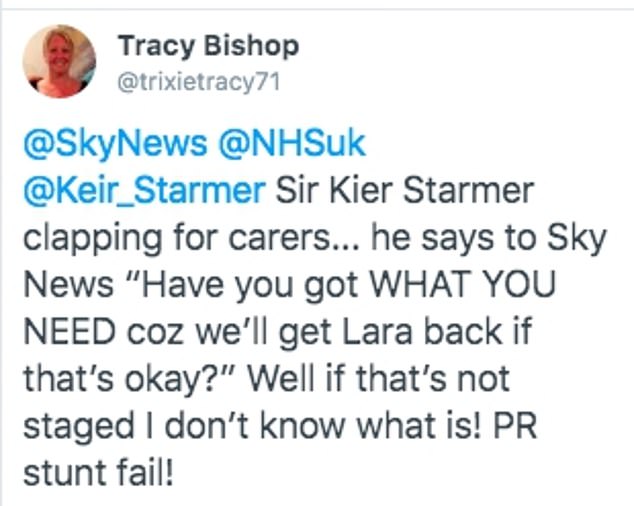 People responded angrily to Keir Starmer wanting to go back inside with his wife at the end of the clap. Users said he was ‘shamefully’ using the clap as an opportunity for a photograph while others joked the incident was a ‘PR stunt fail’

Dominic Raab also said restrictions must remain in place for the moment as he renewed them for another three weeks but risked confusing the situation by saying the PM will spell out ‘milestones’ that will permit moves to loosen the draconian curbs.

Mr Johnson today told Cabinet that the government will be proceeding with ‘maximum caution’ as Downing Street warned people not to sunbathe this bank holiday weekend as temperatures are due to rise to almost 80F (26C).

Some of the first changes to lockdown are expected to permit more outdoor activities because of the reduced rate of transmission outdoors compared to in confined spaces.

The Prime Minister will use an address to the nation on Sunday to set out his lockdown exit plan with some changes then expected to be made starting on Monday.