Hugo Swire faced fresh allegations last night after he was accused of ‘lewd’ behaviour in a taxi with health minister Nadine Dorries.

Friends of Miss Dorries said the former Tory MP and minister asked her to ‘slip her hand inside his coat’ on their way to a formal dinner in Mayfair.

The old Etonian is said to have bragged to her: ‘Come on Nadine, I promise you that a girl like you will never have felt anything quite like this before.’ It is claimed that Sir Hugo was not deterred when Miss Dorries ‘recoiled’ in shock. 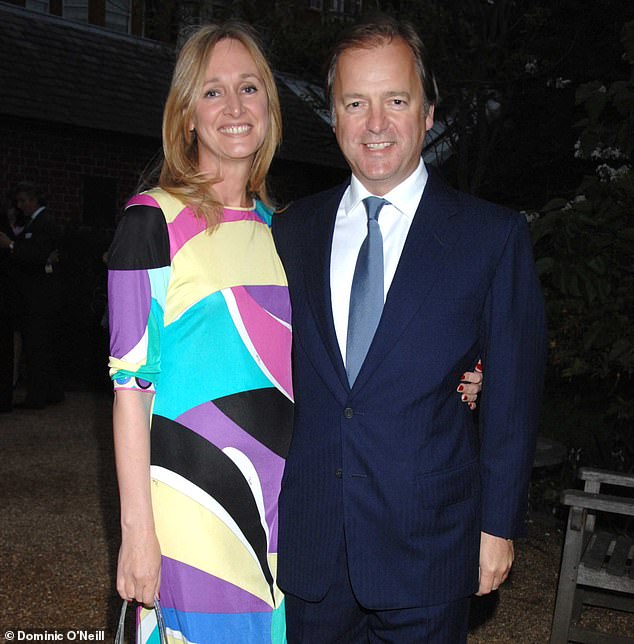 Hugo Swire, pictured with his wife, faced fresh allegations last night after he was accused of ‘lewd’ behaviour in a taxi with health minister Nadine Dorries

Neighbours threatened to call the police over the ‘all-night racket’ coming from the Knightsbridge apartment of a ‘gorgeous’ South American envoy Sir Hugo lusted over.

Ana Delgado, pictured, made a big impression on him when he was a foreign minister. In her book, Lady Swire says her husband told her: ‘I’ve fallen in love.’ She asked: ‘Who is it this time?’ and he replied: ‘The Panamanian ambassador. She’s gorgeous and just 30.’

Miss Delgado’s neighbours were not such fans. One said: ‘There was an all-night racket from her apartment some nights. I told her I would call the police.’

There is no suggestion of an improper relationship between Sir Hugo and Miss Delgado.

To her ‘utter horror’ he grabbed her hand and pushed it inside his coat. ‘Go on, feel that,’ he allegedly said. ‘It’s mink. That’s how we do it now. We wear it where no one can see it.’

Miss Dorries told friends she was ‘terrified’ by Sir Hugo, describing his behaviour as ‘ignorant and outrageous’. The Daily Mail has revealed Sir Hugo’s wife Sasha says he treated her like a pig after she accused him of having an affair.

Lady Swire says in her book – Diary of an MP’s Wife – that David Cameron gave Sir Hugo a ‘severe ticking-off’.

Miss Dorries is one of the many Tory targets of Lady Swire’s abuse in the book. Provocatively, she calls Miss Dorries, who is minister for mental health, ‘Mad Nad Dorries’.

A friend of the minister said: ‘Hugo had a really lewd grin in the taxi and acted as though he was irresistible.’

The source added that Miss Dorries now wishes she had told Lady Swire of her husband’s behaviour.

Describing the incident, a source said: ‘Nadine’s eyes were watering from the fumes hanging on Hugo’s breath. His comments on a ‘girl like you’ were clearly a dig at her working class background.

‘She said he was quite right: there really weren’t many men wearing mink-lined coats on her council estate in Liverpool.’

The source said Miss Dorries saw Sir Hugo as ‘a dumb posh boy whose parents had to pay vast sums of money to drill the basics in, hoping something, anything, would stick’.

They were involved in another clash after she publicly called Mr Cameron and George Osborne ‘arrogant posh boys’. Lady Swire claims her book is a modern version of the diaries of Alan Clark, a minister under Margaret Thatcher.

But there were signs of a growing backlash from senior Tories furious at Lady Swire’s ‘reckless indiscretion and lack of taste’.

One former government minister, who was a close friend of the couple, said last night: ‘It is a gross act of treachery. They have thrown their friends under the bus and have committed social suicide.’

Sir Hugo did not respond to a request for comment.