Hundreds of people were filmed ignored social distancing rules last night while clapping for the NHS on Westminster Bridge in a ‘sickening’ video.

The busy crowd gathered for the weekly NHS applause at 8pm under the noses of London police officers, who lit up the road with their cars.

Junior doctor Damir Rafi captured the moment in a Twitter video that has been watched more than 6.3 million times and caused outrage on social media.

Dr Rafi, who works at St Thomas’ hospital, said: ‘I’m a doctor working at the hospital that’s right there.

‘And yes, I was also somewhat perplexed by the lack of social distancing.’ 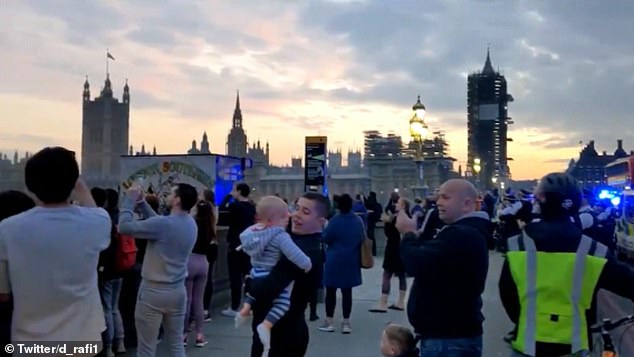 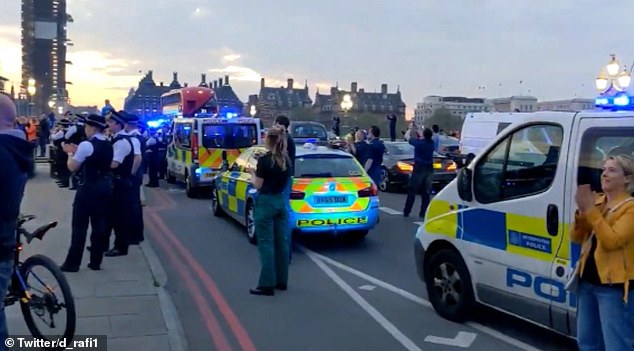 Police watch on and join in with the applause, likewise unperturbed by the lack of space between people

The crowds are within touching distance of each other, seemingly oblivious to the government’s rules on social distancing.

Police watch on and join in with the applause, likewise unperturbed by the lack of space between people.

People carrying babies and looking after young children look around while others film the event for their social media.

One man snakes through the crowd with a bike as the sun sets behind the Houses of Parliament and Elizabeth Tower, currently under refurbishment.

Piers Morgan, Ben Stokes and comedian Omid Djalili slammed the crowds on Twitter. Piers wrote: ‘Do they not understand the irony of clapping the NHS yet deliberately increasing the risk of putting more pressure on the NHS?’

The video caused outrage among members of the public, with a nurse saying it made her feel ‘sick’.

She wrote: ‘This is just really infuriating!!!! I’m a Nurse & this scene made me sick!!!

‘It’s more appreciated if social distancing was practise here than the clapping itself! Do we really CARE???

‘Expect for more weeks of torture, more casualties because of this!!!’

Piers wrote: ‘Do they not understand the irony of clapping the NHS yet deliberately increasing the risk of putting more pressure on the NHS?’

‘The lack of social distancing wile people clap for carers is like thanking the people who have to wipe your backside by monumentally cr*pping yourself.’

People around the country have been applauding NHS staff and other key workers every Thursday night since the nationwide lockdown was put in place.

London Metropolitan Police said: ‘Officers, along with other emergency service workers, came together last night on Westminster Bridge to celebrate the work of all key workers.

‘A large number of members of the public also gathered to express their gratitude.

‘While many people adhered to social distancing guidance, it appears that some did not.

‘We regularly remind our officers of the importance of social distancing where practical, and will continue do so.’