A co-worker of San Jose, California, gunman Sam Cassidy was left unnerved following a January 2020 confrontation with him, according to the gunman’s workplace disciplinary records, which were released Thursday.

“He scares me,” the co-worker reportedly said, according to documents disclosed by the Santa Clara Valley Transportation Authority, FOX 2 of the Bay Area reported.

“If someone was to go postal, it’d be him,” another employee had told a supervisor about Cassidy, quoting the co-worker who had been in the alleged confrontation with the man who on May 26 of this year would kill nine employees at a VTA rail yard before turning his weapon against himself.

The confrontation had been reported to the VTA Employee Relations and the VTA Office of Civil Rights but the employee refused to identify who made the comment, FOX 2 reported.

Cassidy had shouted at the coworker for “2-3 minutes” in a morning meeting where he referred to someone in the meeting as the “most corrupt” person at the company, The Mercury News of San Jose reported.

A week after the incident, an employee sent an email that said Cassidy “does not have anything in his disciplinary history that would seem to be of any concern at this point to investigate further” and Cassidy was never formally disciplined over the incident.

The argument was over vacation days, The Mercury News reported.

“So far, there is no indication of records in Cassidy’s VTA personnel file of any formal discipline for threatening behavior or violence during his 20-year career at VTA,” the VTA said this week, according to FOX 2.

On July 16, 2019, Cassidy was sent home without pay for two days for insubordination, accused of not properly following the company’s radio sign-out policy. 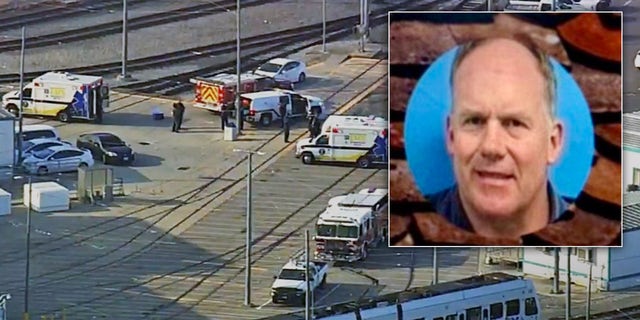 Gunman Sam Cassidy (inset) killed nine co-workers and then himself on May 26 at a transit agency railyard in San Jose, California, authorities have said.

On Oct. 21, 2020, Cassidy allegedly refused to take mandatory CPR training because of the threat of the coronavirus and still didn’t take it after the company made what it viewed as a reasonable accommodation for him.

On Nov. 28, 2020, he left work without permission after using the radio for a personal conversation, which is against company policy.

The VTA said it was still going through thousands of documents, including emails, that may shed more light on Cassidy’s time with the agency, according to FOX 2.

Investigators have not assigned a motive for the mass shooting.

Five years ago, Cassidy was detained by U.S. customs and border personnel over some suspicious writing in his possession as he returned from a trip to the Philippines.

Authorities found him to be carrying books about terrorism and notes about how much he hated the VTA, according to a Department of Homeland Security memo obtained by The Wall Street Journal.

Customs and Border Protection officials reportedly found a black memo book “filled with lots of notes about how he hates the VTA.” His baggage and electronic media were also inspected, the DHS memo said.

Cassidy’s ex-wife also said he had talked about killing people at work more than a decade ago.