Britain’s billionairesses: Record 25 women including Salma Hayek are now in the ten-figure fortune club – and 150 are worth over £120million

Among them are Hollywood star Salma Hayek, 53, the sixth richest woman in the country. She is pictured above in February this year

Twenty-five women billionaires are for the first time among the 1,000 richest people in Britain.

And there are now 150 women who have, or share, personal fortunes worth £120million or more.

Among them are Hollywood star Salma Hayek, 53, the sixth richest woman in the country, who shares her fortune of £6.592billion with husband Francois-Henri Pinault.

He oversees luxury brands such as Gucci through his family’s Kering operation.

They have a home in Holland Park, west London, as well as others in Paris and Bel Air, California. The league table has been published as part of the latest Sunday Times Rich List.

Other famous names on the list include another actress, Catherine Zeta-Jones, 50, who has a combined wealth of £210million with her husband, actor and producer Michael Douglas, 75.

There are also three authors on the list: JK Rowling, 54,who has amassed £795million from her Harry Potter books and films; Yorkshire-born novelist Barbara Taylor Bradford, 87, who is worth £162million; and E L James, 57, of Fifty Shades fame, who has a total wealth of £132million.

But it is Tetra-pak heiress Kirsten Rausing, 67, who is named as the richest woman with an estimated fortune of £12.1billion.

Ex-Miss UK Kirsty Bertarelli, 48, is pictured above who, with her financier husband Ernesto, has an estimated fortune of £9.2billion. Betting tycoon Denise Coates (right) sees a £310million rise in her fortune to £7.166bn, despite the coronavirus shutdown, which has seen sport – and therefore gambling on its outcomes – come to a standstill around the world

Swedish-born, she is a former director of the National Stud and a member of the Jockey Club.

She owns half of the British Bloodstock Agency, which buys and sells racehorses on behalf of wealthy clients, having started with a 10 per cent stake in 1991.

She also owns the Staffordstown Stud in Co Meath, in the Irish Republic, and the Lanwades Stud in Newmarket.

Miss Rausing and her brothers Jorn and Finn own Tetra Laval, the Swiss-headquartered packaging group founded by their grandfather Ruben and built into a huge multinational by their late father Gad and his British-based brother Hans senior, who died last year aged 93.

Hans’s fortune is not new to the list but his widow Marit Rausing – in third place on the richest women’s list – is new, as she now heads her family’s £9.59bn wealth.

Betting tycoon Denise Coates sees a £310million rise in her fortune to £7.166bn, despite the coronavirus shutdown, which has seen sport – and therefore gambling on its outcomes – come to a standstill around the world.

She is deeply involved in the row over the damage caused by online gambling, which the Daily Mail has campaigned against.

The women’s top ten also includes Charlene de Carvalho-Heineken, 65, of the brewing dynasty, who is said to be worth £10.3billion, and ex-Miss UK Kirsty Bertarelli, 48, who, with her financier husband Ernesto, has an estimated fortune of £9.2billion.

The highest wholly new entry to the women’s list is Rihanna. Earlier this week it was revealed that the 32-year-old had burst in to the top of the charts as Britain’s third-richest musician – thanks to her line of raunchy lingerie and a move to London.

The Barbados-born singer’s estimated £468million fortune is powered by her Fenty cosmetics brand, which launched in 2017 and generated £462million in its first 15 months.

She also has eight albums to her name and Savage X Fenty, the successful lingerie brand. 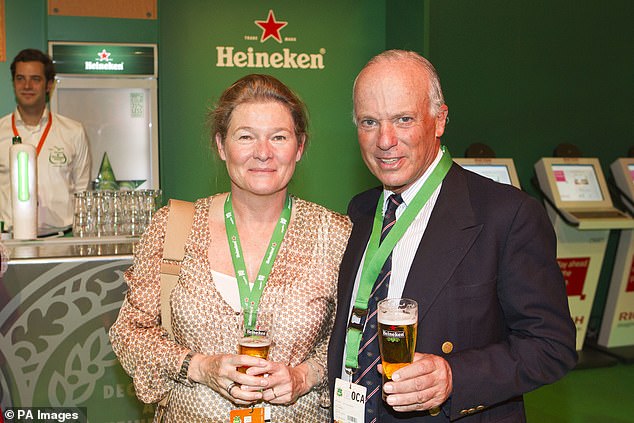 The women’s top ten also includes Charlene de Carvalho-Heineken, 65, of the brewing dynasty, above, who is said to be worth £10.3billion