London: Out of the blizzard of media coverage of Prince Harry and his wife Meghan’s TV interview, the thing that stood out for young Londoner Binta Barr was that their son’s skin colour had been discussed within the royal family before his birth.

Meghan, who has a black mother and a white father, said that when she was pregnant with Archie and living as a senior royal in Britain, there had been “concerns and conversations” about how dark her son’s skin might be. 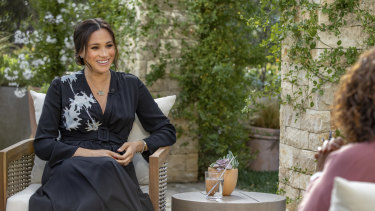 Meghan, Duchess of Sussex, left, speaking with Oprah Winfrey during the interview. Credit:AP

“That was really hurtful to a lot of people to be honest, especially because I’m black as well,” Barr said when asked for her reaction to Meghan’s interview with Oprah Winfrey, which aired in the United States on Sunday.

Barr, an 18-year-old student, imagined being in Archie’s place when he hears about it later in life. “If I heard that, in about 10 years’ time, watching the interview, I will feel upset,” she said. 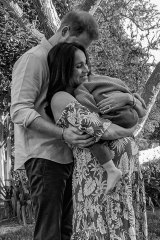 Prince Harry, Duke of Sussex and Meghan, Duchess of Sussex pose with son Archie Harrison Mountbatten-Windsor, following their announcement during an interview with Oprah Winfrey that the couple are expecting a baby girl.Credit:Misan Harriman/Getty

The issue of racism and what part it may have played in Meghan’s struggles with her husband’s family and with life in the public eye is one that divides the British public.

At one end of the spectrum, many Britons, especially in the black community and in younger age groups, empathise with Meghan and see her as a victim of racist attitudes in the media and potentially in the royal establishment.

“As a black woman she didn’t get it very easy within the royal family and the newspapers weren’t exactly friendly,” said photographer Karen Louise, 37.

“When Kate was pregnant, it was ‘oh, Kate’s cradling her baby bump, it’s so lovely’, and then when it was Meghan it was like ‘why doesn’t Meghan stop touching her belly?’,” she said.

At the other end of the spectrum, other Britons, especially older white people, dismiss Meghan’s complaints as baseless and undignified, saying she should show more respect for the institution into which she married.

According to a YouGov poll of more than 4300 British adults published last month, there was a direct correlation between people’s age and whether they felt it was appropriate for Harry and Meghan to bare their souls to Oprah Winfrey.

Queen Elizabeth, Harry’s grandmother, has never given an interview in nearly 70 years on the throne and has revealed almost nothing about her thoughts or emotions.

Many older Britons admire that reserve and think Harry and Meghan’s tell-all interview was unbecoming.