The country’s three biggest rail unions have today written to Boris Johnson, warning that increasing train services will be ‘dangerous and lead to the public flouting the rules.’

Union leaders have voiced ‘severe concerns’ over any moves to increase train services as part of the expected easing of the economic lockdown.

RMT’s Mick Lynch told BBC Radio 4’s Today programme that ministers want to be running 85%-100% of services within a fortnight despite it not being ‘safe’.

The three main rail unions Aslef, RMT and TSSA, have now written to the Prime Minister warning that increasing services would send out a ‘mixed message’ that it is okay to travel by train, despite official advice suggesting otherwise. 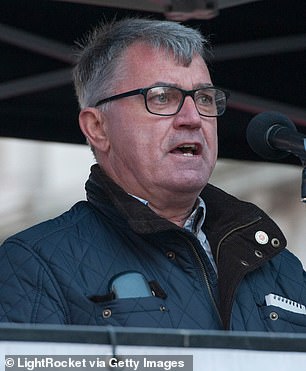 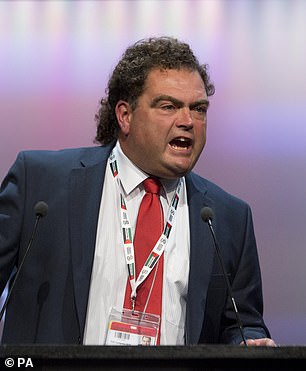 The letter was signed by the general secretaries of Aslef, the RMT and the TSSA, Mick Whelan, Mick Cash (left) and Manuel Cortes (right)

‘This mixed messaging could be dangerous and lead to the public flouting the rules on travel and work,’ they said.

They also pointed out there was no agreement on how services can be increased whilst protecting workers and passengers through social distancing and personal protective equipment.

The letter continues: ‘We will not accept new working patterns that put the lives of railway workers and passengers at risk.

‘To be clear – we are not convinced that there is any basis at this time for a safe escalation of services.

‘We therefore call on the Government and train operators to work with us in establishing where there is a real demand to increase services and, where that demand exists, how it can be delivered safely.

‘There will have to be an industry-wide agreement with the unions that any increase in services does not increase danger and the risk of virus transmission for our members, for passengers, or for our communities.

‘Seeking a blanket increase in services as part of a symbolic and premature drive to apparent normality, at the potential risk of countless lives, is completely unacceptable to us.’

The letter was signed by the general secretaries of Aslef, the RMT and the TSSA, Mick Whelan, Mick Cash and Manuel Cortes. 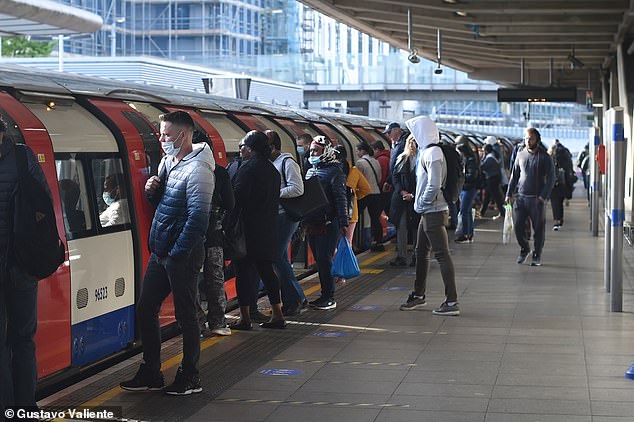 RMT General Secretary Mick Cash – who represents Tube workers – last week wrote a column demanding a new deal for all his workers, including higher pay and a public service, ‘free from the grip of private speculation.’

In the column in the Morning Star on Friday, he added: ‘One thing is for sure, once it is proven as safe enough for us to move out of the lockdown and begin the process of moving back to some kind of normal operation things will never be the same again.’

He boasted about negotiating with transport bosses: ‘RMT has called out those employers at every turn and we have exposed their failures as leverage to force them back into line’

‘One thing is for sure, once it is proven as safe enough for us to move out of the lockdown and begin the process of moving back to some kind of normal operation things will never be the same again.’

‘If rail and other services can be taken over wholesale by the state to protect them during a crisis then they can be taken over on a permanent basis when that crisis subsides as a public service free from the grip of private speculation.

‘There must also be no more talk of austerity and our colleagues in health and social care should get the pay and the resources they have proven so publicly that they deserve. Their fight will be our fight.

‘Clapping our essential workers on a Thursday evening is fine and shows exactly where the public stand. But that support has to be transformed into a new deal for the whole country and the services and the staff that we value so dearly when this emergency eases.’

Finn Brennan, ASLEF’s organiser on the Underground, added: ‘London Underground need to urgently engage with unions so that, together, we can work out how services can be increased in a way that is safe. Safe for passengers, and safe for rail staff. If they don’t, then we risk the service collapsing completely. There is no point in pretending that social distancing is possible for passengers on the Underground. That is why other major metro systems are insisting that masks are worn.’