The Queen will address the nation to mark the 75th anniversary of VE Day on an extraordinary day of virtual commemorations.

As part of the revised plans to mark the occasion during lockdown announced today, Her Majesty’s words will be broadcast on May 8 on BBC One at 9pm.

That was the exact moment her father King George VI gave a radio address in 1945, broadcast from bomb-scarred Buckingham Palace, in which he asked the nation to join him in giving thanks ‘for a great deliverance’ as the war in Europe had ended.

The message will be recorded at Windsor Castle under the same conditions as the Queen’s national broadcast earlier this month – with a lone cameraman in protective gear standing more than two metres away, a royal source said. 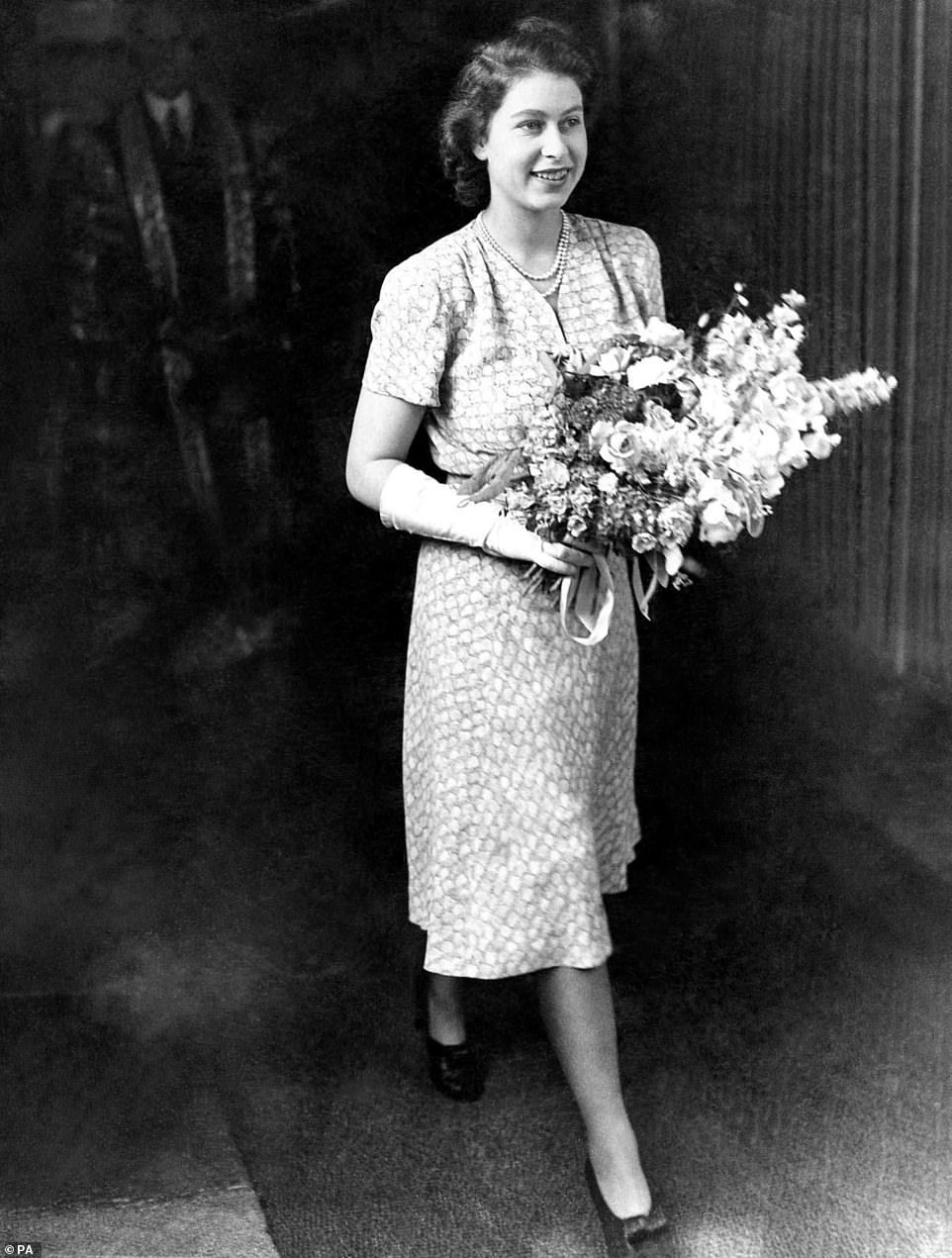 Her Majesty Queen Elizabeth II will address the nation at 9pm on May 8 to mark the 75th anniversary of VE Day. She is pictured receiving an honorary degree on 10 July 1946 in London 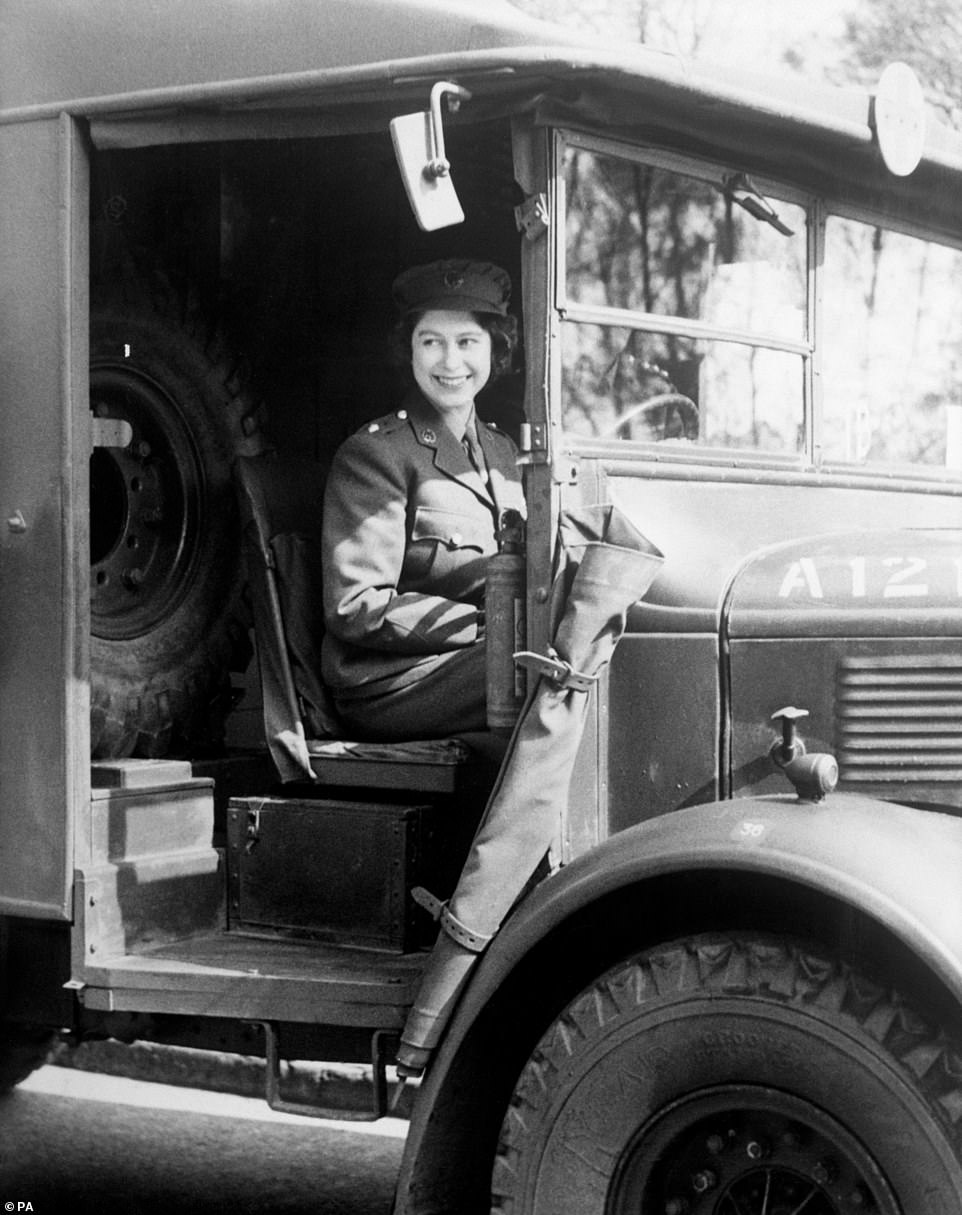 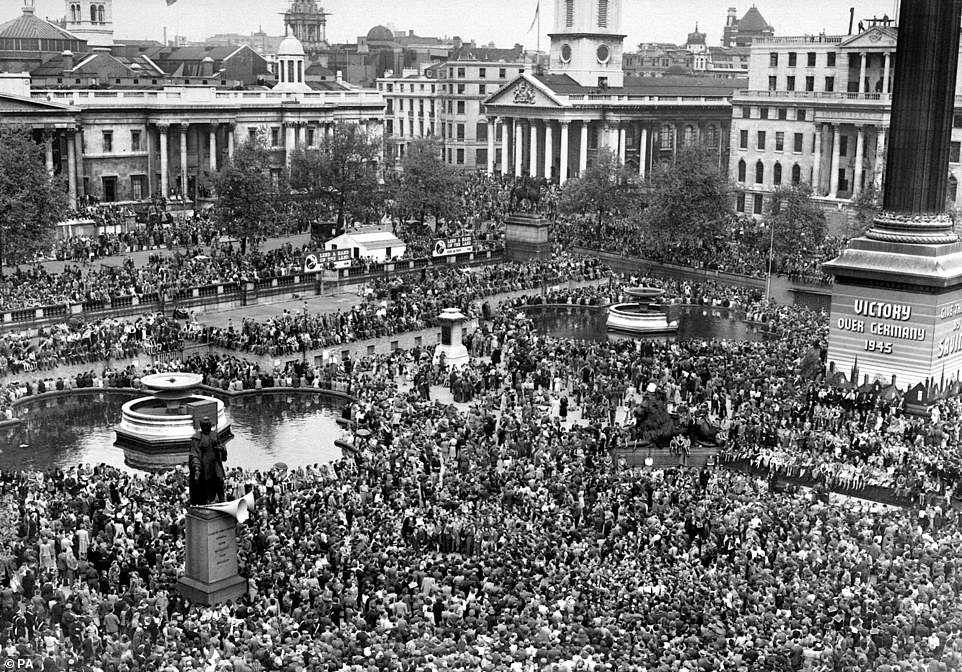 Huge crowds are seen at Trafalgar Square in London to celebrate VE (Victory in Europe) Day, which marked the end of the Second World War in Europe on May 8 1945

On that occasion, the Queen spoke of how the ‘painful sense of separation from their loved ones’ that social distancing was causing for people reminded her of the experience child evacuees had during the Second World War.

The Queen’s address will be broadacast during a show called The People’s Celebration starting at 8pm and featuring stars including Katherine Jenkins performing versions well-known songs from the 30s and 40s as well as reminiscences from the wartime generation.

Her Majesty’s message will be followed by a national singalong of Dame Vera Lynn’s We’ll Meet Again.

The public will be encouraged to open their doors and join in with this moment of celebration.

The Prince of Wales will read an extract from King George VI’s diary from May 8, 1945 which describes the day including The Royal Family’s iconic Buckingham Palace balcony appearances.

Members of the Royal Family and Boris Johnson will take part in a series of video calls with Second World War veterans and those who served on the Home Front, it was also announced by the government today(wed). 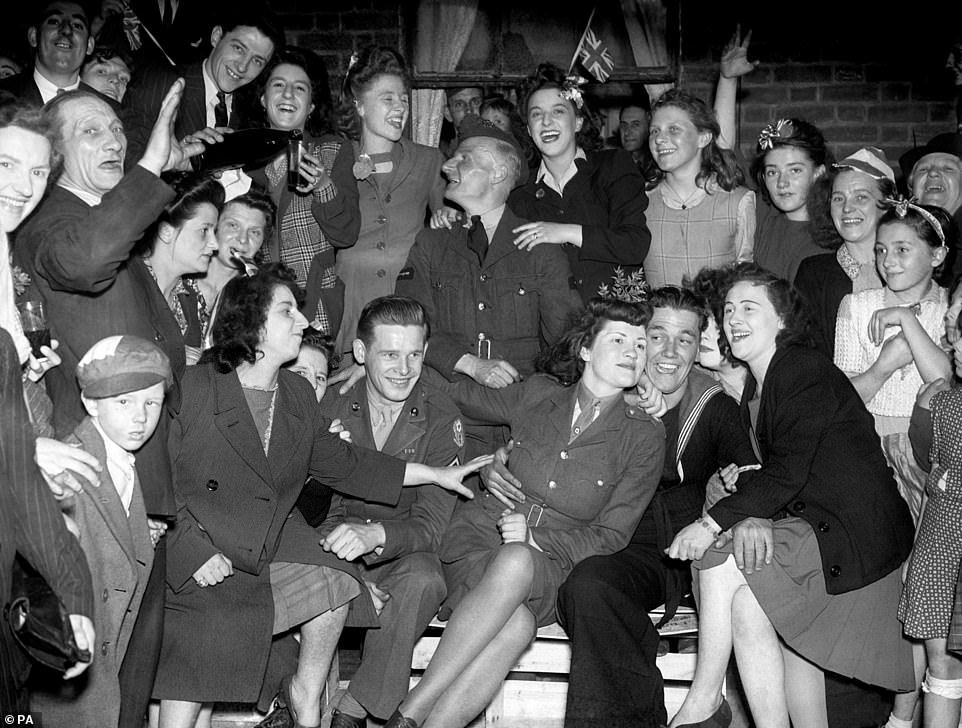 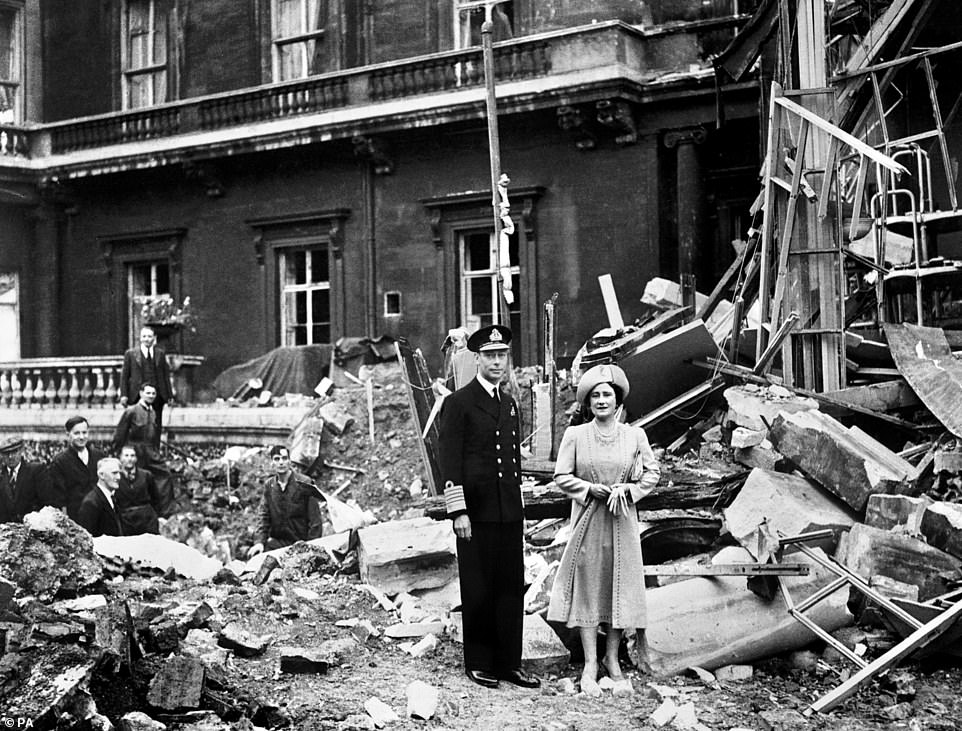 The official commemorations will begin at 11am with a national moment of remembrance and a two minute silence as the public are called on to mark the historic occasion at home.

As the Daily Mail announced on Saturday, we are playing our part too by sending a Spitfire across a great swathe of the country in a bid to pay tribute to the heroes of 75 years ago – and to the heroes of today who are in the frontline of the fight against coronavirus.

To allow the awe-inspiring aircraft to soar into the skies, Transport Secretary Grant Shapps has given the Mail the only exemption for a civilian flypast on VE Day.

It was the Mail – supported by Dame Vera herself – that came up with the idea for the singalong of We’ll Meet Again as part of the BBC’s VE Day coverage. The idea was met with the approval of the Government and veterans’ organisations.

Ahead of the 75th anniversary, the Government had declared a special Bank Holiday in order to recreate that VE Day excitement with a series of major gatherings, including a service with the Queen at Westminster Abbey, march pasts down the Mall and street parties. 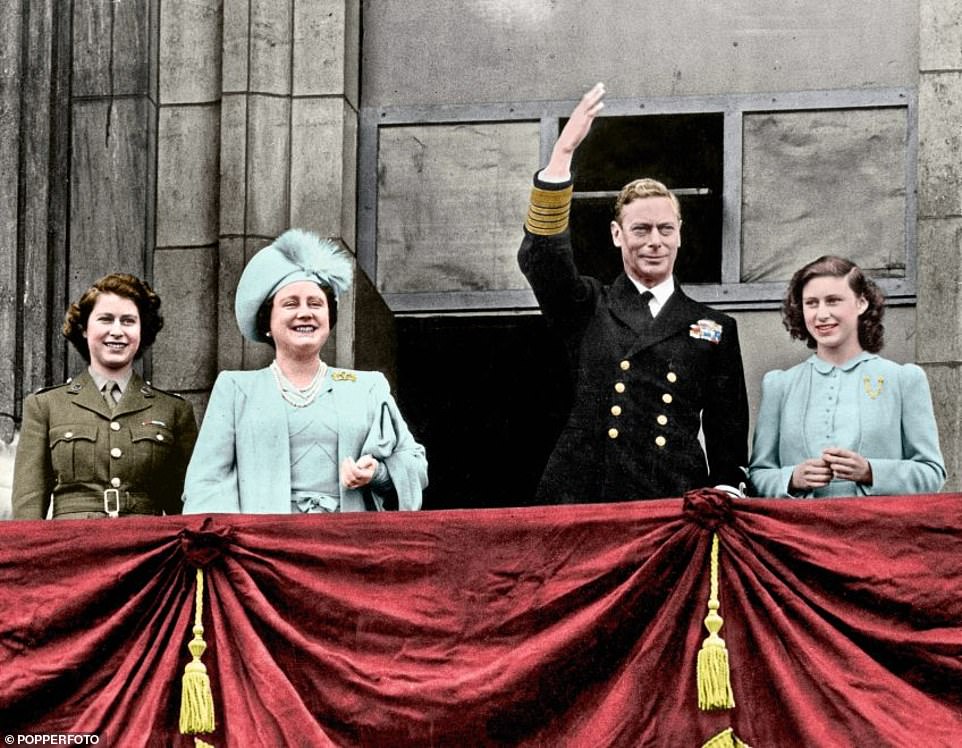 King George VI is pictured waving from the balcony of Buckingham Palace alongside his wife, the Queen mother, now-Queen Elizabeth and her sister Margaret on May 8 1945

That all had to be changed because of coronavirus outbreak and the revised plans announced today(wed) allowing the public to remember and give also include:

Culture Secretary Oliver Dowden said: ‘In these difficult times, acts of remembrance are even more poignant.’

After the two minutes’ silence, the Royal British Legion is hosting a VE Day 75 livestream, sharing stories and memories from those who served and sacrificed during the Second World War, and recognising the difficulties people are experiencing today. 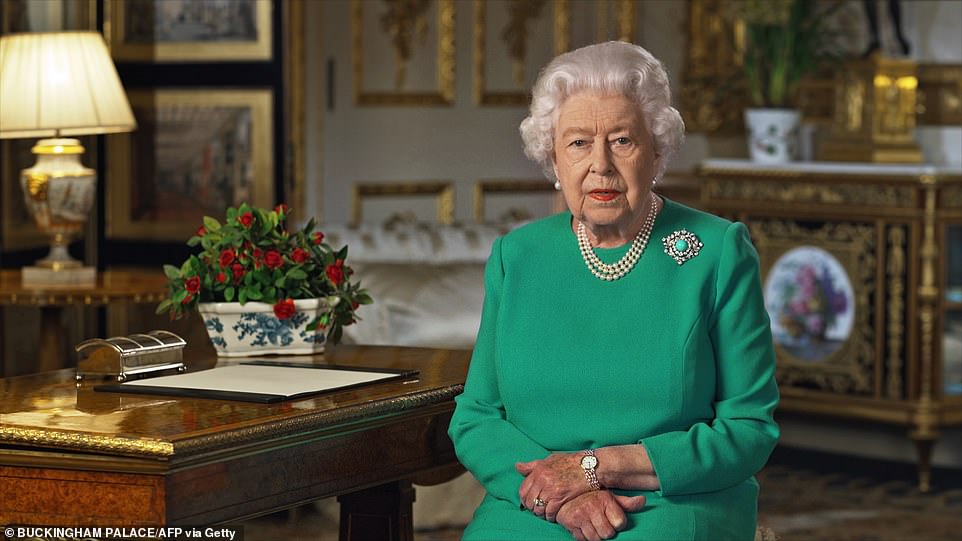 The Queen’s VE anniversary message will be recorded at Windsor Castle under the same conditions as the Queen’s national broadcast earlier this month (pictured) – with a lone cameraman in protective gear standing more than two metres away, a royal source said

The Legion’s Assistant Director of Commemorative Events Bob Gamble said: ‘Now more than ever it is important to unite in recognition of people’s service to the nation, just as communities did 75 years ago.

‘There is no right or wrong way to take part in the silence at 11am, some people may wish to stand at their windows or step outside their front door, but we hope that individuals and families across the UK will embrace the opportunity to share in a national moment of reflection.’

The WRAC Association is also asking female veterans to join in a virtual singalong via a specially arranged Zoom Call to We’ll Meet Again accompanied by the Yorkshire Military Band.

The National Museum of the Royal Navy, National Army Museum and Royal Air Force Museum will host their first tri-service celebration with a Virtual VE Day 75 Festival May 7 to May 9 with discussions and events broadcast online.