All hands to the pump! Britain’s pubs and restaurants urgently need staff to fill 200,000 vacancies – as proportion of EU workers in hospitality sector falls to lowest level in five years after thousands went home due to pandemic

The proportion of European Union workers in the UK’s hospitality sector has dropped to its lowest level in at least five years – with British staff now making up more than half the workers in the industry, it emerged today.

People from EU countries made up 37 per cent of the workforce at more than 700 hospitality companies in June – down from 43 per cent two years ago, according to Fourth, a firm that provides software to the industry.

The percentage of British workers in the sector rose from 46 per cent to 51 per cent, the company’s data showed as restaurants continue to report problems in finding staff with some closing down or cutting services as a result.

Fourth added that thousands of workers in the sector are still furloughed. Some 45 per cent of staff on payroll are still on full or flexible furlough, although this is the lowest proportion since the scheme began last year.

Britain’s leading hospitality trade association UKHospitality has told how businesses across the country are looking for staff, and that 200,000 more employees are needed to keep restaurants and pubs running at full capacity.

And problems have intensified during the ‘pingdemic’ with industry bosses estimating in recent weeks that one in five staff in hospitality have been pinged by the NHS Covid-19 app – equating to about 400,000 employees.

The trend towards fewer EU and more British workers looks set to continue after Brexit, with the problem having been exacerbated in the past 18 months by European nationals heading home because of the pandemic. 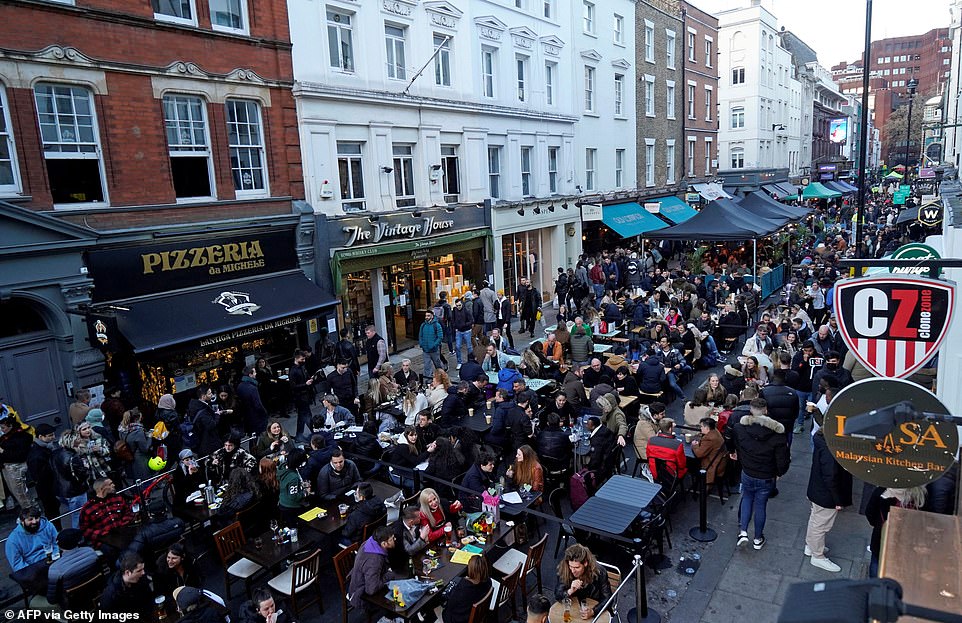 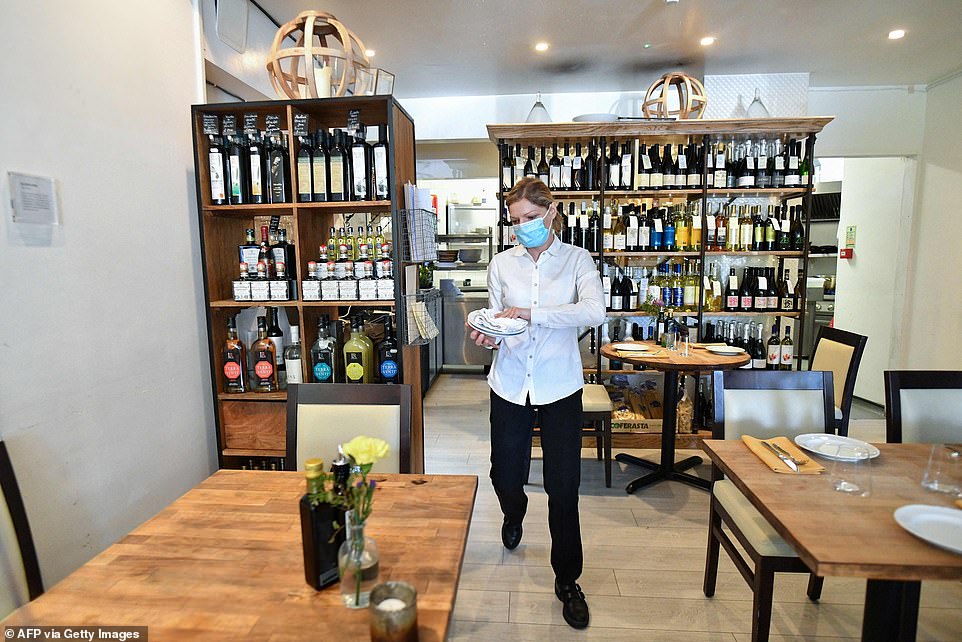 An employee sets a table at the Italian restaurant and wine shop Lume in Primrose Hill, North London, on July 22, where the owner is now considering closing one or more days a week or limiting services

Last month 63 per cent of new starters in the sector were British, which was the highest figure since Fourth started measuring in 2016. EU citizens made up 28 per cent, compared with 50 per cent in January 2019. 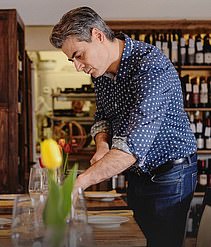 Italian restaurant owner Giuseppe Gullo is among the hospitality bosses facing a lack of manpower amid the ‘pingdemic’ and EU staff exodus.

Mr Gullo, who runs Lume restaurant in the upmarket London district of Primrose Hill, is now considering closing one or more days a week or limiting services.

He said two members of his team of eight moved back to Italy after the Covid-19 crisis began, adding: ‘The pandemic made people realise they could change work very easily.

‘We are very worried. I have a very good team, but if they decide to move on if they get poached, we struggle to fill up those positions.’

When the restaurant reopened at the end of May, Mr Gullo immediately sensed there would be problems, adding: ‘Everybody in restaurants was calling each other, looking for cooks and servers.’

He said all the CVs he has received in his 15-year career in London came from mainland Europe, but never from Britain.

The total headcount for the second quarter of this year – which is April, May and June – was down 25 per cent compared to the same quarter in 2020.

The company found that the proportion of EU workers has been consistently declining since the UK formally left the EU in January 2020, which was closely followed by the outbreak of the pandemic two months later.

This has been offset by a steady increase in British nationals, rising from 46 per cent in January 2020 to 51 per cent in June 2021 – taking the figure over that threshold for the first time in Fourth’s records.

The proportion of workers from non-EU countries has remained relatively steady, increasing slightly from 11 per cent in January 2020 to 12 per cent in June 2021.

This data shows that the majority of back-of-house jobs, such as chefs and kitchen porters, are still held by EU workers, although that number is decreasing.

The same can be said for new starters in the sector, with British workers leading the way.

During June, they accounted for almost two-thirds (63 per cent) of all new hires across the sector, again the highest figure on record.

In that period, EU nationals made up just a quarter (28 per cent) of new hires – a significant reduction since January 2019 (50 per cent of new starters).

Workers from non-EU nations made up 10 per ent of new hires, a figure that has remained relatively steady since 2019.

Fourth’s data also revealed that the pub sector appears to be the most resilient, with its headcount down 7 per cent this month compared to July 2020, followed by hotels (13 per cent down), restaurants (14 per cent down) and ‘quick service restaurants’ or QSRs (15 per cent down). 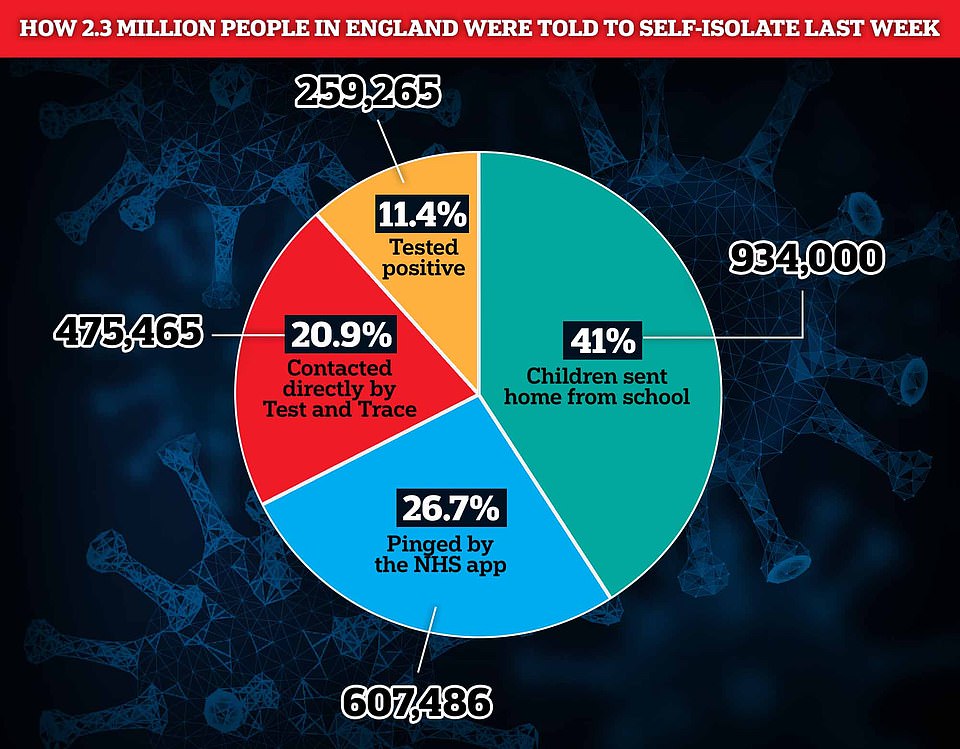 Union chiefs are urging key workers to ignore the Government’s exemptions from self-isolation and stay home if they are ‘pinged’ by the NHS Covid app, in a move that threatens disruption for shoppers, commuters and holidaymakers

In addition, there were 54 per cent more starters than leavers in June 2021, a figure which has been consistent since April this year.

How public transport is being hit by pingdemic

Britain’s public transport services are being hit by staff self-isolating, with workers in the sector are among the vast number of people being pinged by the NHS app.

Reduced timetables have been introduced on railways in an attempt to improve reliability after a recent spate of last-minute cancellations due to staff shortages.

Passengers are being advised to check their train is running before they leave home. Thameslink and Southern has cut its weekday timetables on five routes ‘until further notice’, and warned that further changes could be required.

Avanti West Coast has reduced the frequency of its services between London Euston and Manchester, Birmingham and North Wales to ‘manage staff shortages and ensure a reliable service’.

A revised timetable with fewer services was also launched by London Northwestern Railway on Saturday.

ScotRail said a ‘very limited number of trains’ are being cancelled due to staff shortages, but it has not amended its timetables. Transport for London closed the Circle and Hammersmith and City lines over the weekend due to more than 300 members of staff self-isolating.

It said control rooms are ‘very vulnerable’ as ‘taking a small number of staff out of the equation at short notice can close an entire line’.

Bus operators Arriva and First Bus said a number of their staff have been told to self-isolate, but pledged to take action to minimise disruption to services. Airline easyJet said its flights are not being affected by the issue.

Fourth’s EMEA managing director Sebastien Sepierre said: ‘A potent combination of Britain’s departure from the EU and the devastating impact of the pandemic continues to significantly shake up the sector’s labour market.

‘The much-publicised staffing crisis is proving hugely challenging for operators, as a consequence of a clear shrinking of the labour pool, in back-of-house roles in particular.

‘It remains unclear how long this disruption might last and how it will be resolved in the months ahead during the long road to recovery.’

It comes as the Government was warned supermarket shelves will go empty again in the next two to three weeks unless action to tackle the pingdemic is stepped up.

Ministers will hold emergency talks today to hammer out plans to more than double to 2,000 the number of critical workplaces where staff can undergo daily tests to avoid isolating.

Drivers of passenger trains are expected to be among the latest workers exempted from quarantine rules as rail companies begin sweeping cancellations from today. Binmen are also expected to receive assistance.

The Government announced last week that it would set up testing facilities at 500 food distribution sites, 100 transport hubs and 100 emergency services bases.

But last night experts warned the action was not enough and there was criticism that only a handful of the sites are up and running.

Metropolitan Police Federation chairman Ken Marsh said 17 per cent of staff in the capital were off last week.

Reduced timetables are being introduced from today on railways after a spate of last-minute cancellations due to staff self-isolating.

Northern, Avanti West Coast, Great Western Railway and Govia Thameslink are among operators cutting services for up to six weeks.

It comes as a hospital trust took to social media to issue an urgent appeal for nurses to work the night shift.

Belfast Health Trust said that Royal Victoria and Mater Hospital were under ‘extreme pressure’, amid a rising number of staff absences due to the pandemic and a surge in coronavirus patients.

Figures last week showed more than 600,000 people had been pinged by the NHS Covid app in seven days.