Seconds from impact! Policewoman’s bodycam captures glass bottle flying through air moments before it strikes hits her in face and knocks her out as police battle violent horde in Hove

Shocking bodycam footage has captured the moment a glass bottle flew through the air before striking and hitting a policewoman in the face and knocking her out.

The incident happened during a violent brawl that broke out at a gathering on Hove Lawns and Brunswick Square in Sussex on Saturday evening.

The police officer and a member of the public were taken to hospital. 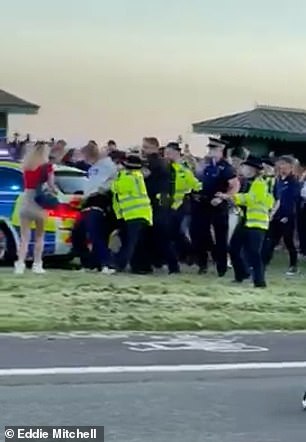 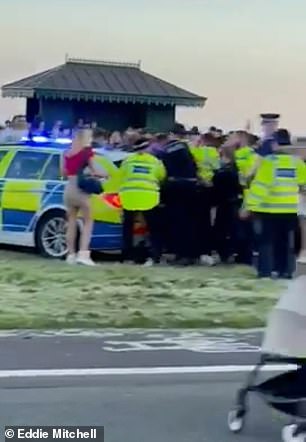 According to Detective Sergeant Chris Lane, a member of the crowd threw the glass bottle at officers.

It hit the policewoman directly in the face, knocking her unconscious. Her bodycam footage captured the moments leading up to the incident.

‘As she fell to the floor, her head also hit the police car, and she was unconscious and injured in what was clearly a very dangerous situation,’ Sergeant Lane said.

A man was subsequently arrested.

Officers were forced to use Captor spray on the teenagers while making the arrest due to a ‘very large crowd’ that surrounded the suspect.

Sussex Police said in a statement: ‘We’ve responded to reports of anti-social behaviour involving a large group of people on Hove Lawns and Brunswick Square this evening. 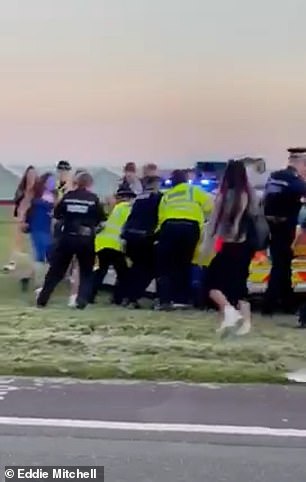 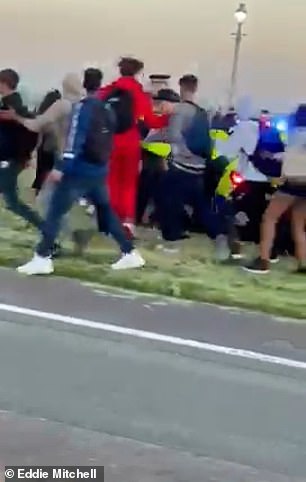 According to Detective Sergeant Chris Lane, a member of the crowd threw the glass bottle at officers

‘During this, a police officer was assaulted and a man subsequently arrested.

‘The officer and one member of the public have been taken to hospital for treatment.

‘Any assault on an emergency services worker is completely unacceptable and will not be tolerated.

‘We will respond to – and take action against – any reports of disruption or disorder in the city.

‘A ‘section 34 dispersal order’ has been put in place which means anyone directed to leave the area by a police officer must do so.

‘If they do not, then they commit an offence and may be arrested.

‘In the meantime we will maintain a policing presence in the area for community reassurance and seek to identify any further offences committed.

‘Thank you for your patience and understanding. Your safety is our priority.’