A Melbourne policeman has been charged with three counts of unauthorised disclosure of police information after allegedly sharing video footage of a friend’s former partner after he pulled her over for speeding. 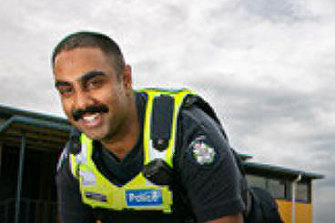 A statement by Victoria Police detailed that the alleged incident, in which police assert a video was taken of an intercepted vehicle and shared to a closed group on social media, took place in Beaconsfield in April 2020, when the officer was working as a trainee.

The woman, aged in her early 20s, was pulled over on the Princes Highway for driving more than 20km/h over an 80km/h speed limit.

Prosecutors will allege that Constable Abeysekera then shared dash-cam footage from the police car showing the rear of the woman’s vehicle after it had been intercepted.

He is also alleged to have sent several messages on Facebook to a group of men familiar with the woman, including her former partner.

The woman lodged a complaint with the Independent Broad-based Anti-corruption Commission last year, before the complaint was forwarded to Victoria Police for investigation.

She has now obtained legal representation, with her lawyer Jeremy King saying his client planned to launch civil action on the basis of malfeasance in public office.

The case follows separate civil action taken against Victoria Police over the leaking of photographs of former North Melbourne player and coach Dani Laidley, which also led to charges of unauthorised disclosure against three officers.

Ms Laidley will seek aggravated and exemplary damages after alleging in a Supreme Court writ that the officers breached the duty of care owed to her while she was in custody, and failed to care for her physical and psychological safety.

On June 4, Constable David Hall, 28, was granted an adjournment in the Ringwood Magistrates Court, where he was facing two counts of disclosing police information without reasonable excuse.

Charge sheets allege that on May 3 last year, Constable Hall sent three text messages each to a man and a woman, and that the messages contained information about Laidley’s arrest, drug possession, possible charges and her gender.

Senior Constable Shane Reid will front the Melbourne Magistrates Court for a mention hearing on June 9, while Senior Constable Gentner will appear in the same court on July 8.

The three officers were charged following a seven-month internal investigation into the circulation of the images, which also resulted in disciplinary action for 39 officers and seven public servants.