Two bungling police forces sent out thousands of PPE facemasks with fraudulent safety certificates to its frontline officers – shortly after the public were warned not to fall for coronavirus con tricks.

Sussex and Surrey police are recalling 2,700 faulty masks already delivered to police stations across the counties after concerns were raised last Thursday over the shipment of 10,000 units.

The masks were intended for officers who attend high-risk environments – but the  alarm was raised when it emerged the masks’ safety certificates were suspected of being faked.

Just days earlier, a warning letter had been issued by Sussex Police warning people to be on the lookout for Covid-19 frauds online.

‘So much for watching out for con artists,’ a force insider said. 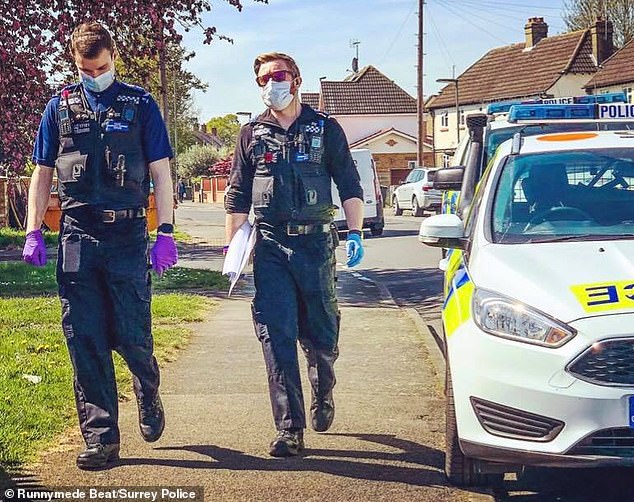 Surrey and Sussex Police forces sent out thousands of PPE face masks with fraudulent safety certificates to its frontline officers – shortly after the public were warned not to fall for coronavirus con tricks. (File photo of Surrey police officers) 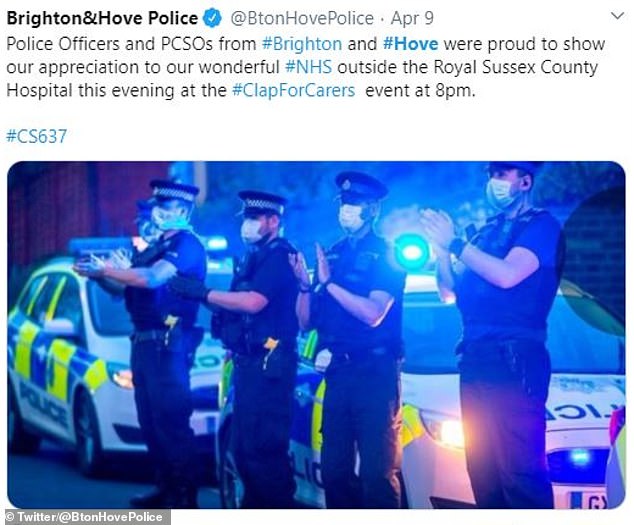 The two forces are recalling 2,700 masks already delivered to police stations across the counties after concerns were raised over the shipment of 10,000 units. A spokesman for Sussex Police said the masks had all been recalled unused within 24 hours

Although the kit was not intended to offer the highest level of protection, it was supposed to afford some degree of reassurance for officers attending sudden deaths, medical incidents where officers may need to carry out CPR and when dealing with suspects who are non-compliant.

In an email sent to Surrey Police staff last Thursday, Superintendent Graham Barnett wrote: ‘Earlier this afternoon, the Operation Apollo logistics team identified that a consignment of FFP2 (marked KS95) masks received in recent days may have issues with their certificates of conformity which are suspected to be fraudulent or invalid.’

A Surrey Police employee, who asked not to be named, said they are ‘furious’ that officers have been put at further risk.

They said: ‘I’m furious and frightened for my colleagues and I know that the frontline colleagues are exposed regularly to potential Covid situations.

‘Surrey [Police] has [in my opinion] misappropriated public money and we feel let down and even more anxious now that we may have contracted the illness through no fault of our own.’

Masks with the highest level of protection are available within Surrey Police to some officers. They are designated as FFP3 masks and can block both liquid and solid aerosols but, as with all organisations, the force has only a limited stock.

Just days before the fiasco emerged, a warning letter had been issued by Sussex Police warning people to be on the lookout for Covid-19 frauds online

Genuine FFP2 masks offer a lower level of protection but still meet World Health Organization standards and are certified by the European Union.

Superintendent Barnett told staff that 2,500 masks had already been issued to officers across Surrey and Sussex when the issues were discovered but a Surrey Police spokesman later said it was around 2,700 that had been sent to police station stock rooms.

Because of the safety risks, the masks have been recalled.

Superintendent Barnett wrote: ‘As we cannot verify the level of protection these products can provide, we have decided that for your safety they will be withdrawn while an investigation takes place.’

A Surrey Police spokesman confirmed that three batches of PPE including 10,000 masks came with invalid certificates ‘or the quality of some of the masks has raised concerns with regard to the equipment’s effectiveness’.

He added: ‘Officer and staff safety is paramount and since the beginning of the coronavirus outbreak both Surrey Police and Sussex Police have worked hard to ensure that there is a ready source of appropriate personal protective equipment (PPE).

‘To give you context, with the international demand around PPE and the ability to source stocks, we have sourced masks from a number of companies – ones we have used previously and others with appropriate levels of stock required in these challenging times.’

The spokesman said the force had acted quickly to recall the masks in consultation with health and safety officers, and that ‘we believe that they are all accounted for’.

Investigations into the orders are ongoing, but Surrey and Sussex Police staff have been updated, along with other police forces across the country, and instructed to use alternative supplies.

Sussex Police chiefs also told frontline staff that the kit’s certificates of conformity were believed to be fraudulent or invalid.

The deception was uncovered days after the force sent out warnings to the public to be on the lookout for conmen trying to take advantage of worried people during lockdown.

Sussex police warned: ‘Nationally, Action Fraud has identified a spate of over 100 cases of Covid 19-related fraud since the start of February.

‘The majority of reports are related to online shopping scams where people have ordered and paid for protective face masks, hand sanitiser and other products, which have never arrived.’

The force advised people: ‘Be careful when shopping online and avoid companies you don’t recognise. Carry out your research and ask a family member or friend if you’re unsure.’

Sussex Police said officer and staff safety has been their priority since the beginning of the coronavirus outbreak.

‘We have sourced masks from a number of companies – ones we have used previously and others with appropriate levels of stock required in these challenging times. We have updated both organisations, and wider policing colleagues both regionally and nationally, and we have directed officers to use alternative supplies.

‘There are currently investigations ongoing into these counterfeit orders and so we cannot go into further details at this time,’ the spokesman said.

The masks, bought from UK suppliers, were issued on Monday last week.

A spokesman said the masks had all been recalled unused within 24 hours.

‘A suspicious looking certificate of quality assurance was identified by our logistics team whilst allocating masks,’ the force said.