New York ends its curfew early and Donald Trump orders National Guard to leave Washington D.C. after a night of peaceful protests as NYC prepares to reopen on Monday amid COVID-19

The 8pm citywide curfew, New York’s first in decades, had been set to remain in effect through at least Sunday, with the city planning to lift it at the same time it enters the first phase of reopening after more than two months of shutdowns because of the coronavirus.

‘Yesterday and last night we saw the very best of our city,’ de Blasio tweeted in his announcement of the curfew’s end ‘effective immediately.’ ‘Tomorrow we take the first big step to restart.’

It comes as President Donald Trump said Sunday he’s given the order for National Guard troops to begin withdrawing from the nation’s capital, saying everything now is ‘under perfect control.’ 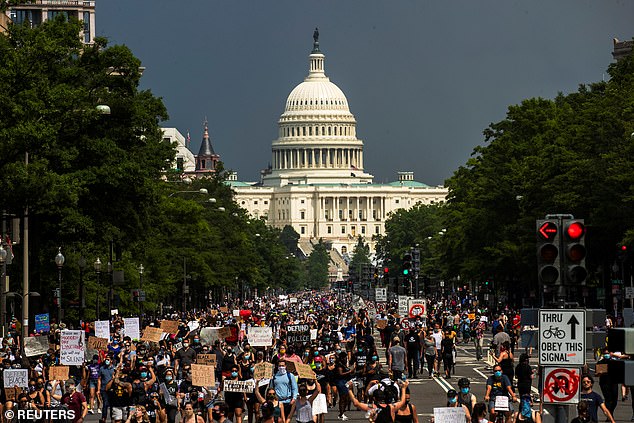 Demonstrators walk towards the White House during a protest against the death in Minneapolis police custody of George Floyd, in Washington on Saturday 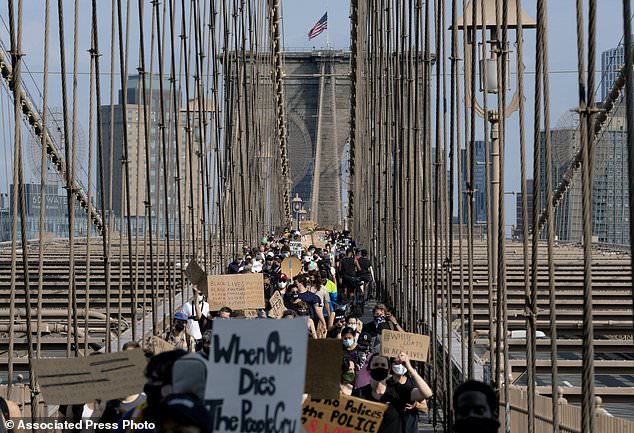 Thousands of people crossed the Brooklyn Bridge into lower Manhattan, where other groups numbering in the hundreds to thousands marched or gathered in places like Foley Square, home to state and federal court buildings, and Washington Square Park in Greenwich Village

The mayor made the announcement (pictured) via Twitter on Sunday morning

The District of Columbia government requested some Guard forces last week to assist law enforcement with managing protests after the death of George Floyd.

But Trump ordered thousands more troops and federal law enforcement to the city to ‘dominate’ the streets after some instances of looting and violence.

Trump tweeted Sunday that ‘They will be going home, but can quickly return, if needed.’

He also ordered more than 1,000 active duty troops to be flown to the D.C.-area in reserve, but they have begun returning to their home bases after days of peaceful protests.

The move followed New York City police pulling back on enforcing the curfew Saturday as thousands took to the streets and parks to protest police brutality, sparked by the death of George Floyd at the hands of Minneapolis police.

More than two hours after the curfew had passed Saturday night, groups of several hundred demonstrators continued to march in Manhattan and Brooklyn, while police monitored them but took a hands-off approach.

Local politicians and civil liberties advocates had called for an end to the 8pm to 5am curfew, complaining that it causes needless friction when officers try to enforce it. But de Blasio had initially insisted the curfew would remain in place throughout the weekend. 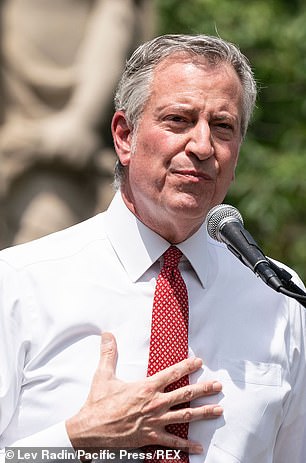 At protests in Manhattan earlier Saturday, volunteers handed out snacks, first aid kits and plenty of water bottles on a muggy afternoon. One person carried a sign listing nearby open buildings for those seeking to escape the heat – which some soon did when a rain storm arrived.

Thousands of people crossed the Brooklyn Bridge into lower Manhattan, where other groups numbering in the hundreds to thousands marched or gathered in places like Foley Square, home to state and federal court buildings, and Washington Square Park in Greenwich Village.

Further uptown, police had erected barriers to all but close off Times Square to vehicle and foot traffic.

As the curfew passed, a large group of protesters walked onto the FDR Drive, the main north-south artery along Manhattan’s east side, closely monitored by police, forcing cops to temporarily shut down one side of the roadway.

‘I’m never surprised by people taking action because inaction, it really hurts the soul,’ he said as he told protesters at Washington Square Park that they would soon march from there to City Hall.

‘People’s feet get tired, their souls get re-energized for the right purpose.’

One of Saturday’s marches was enlivened by a band led by Jon Batiste, bandleader on The Late Show with Stephen Colbert. 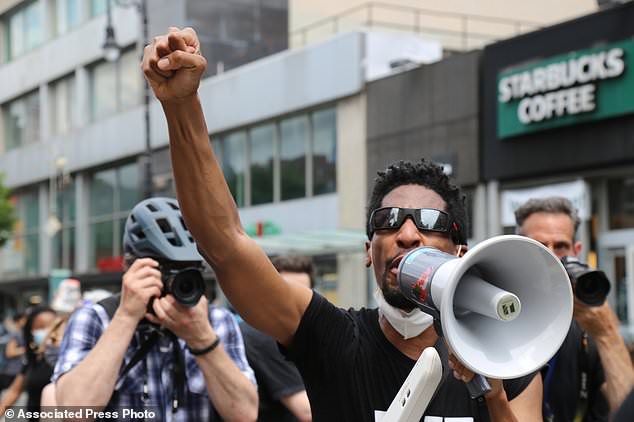 Jon Batiste, bandleader on ‘The Late Show with Stephen Colbert,’ leads a band in a march, Saturday, when there were thousands on the streets in peaceful protest 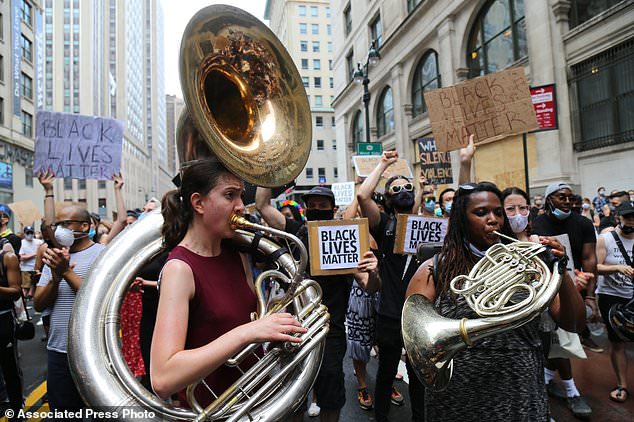 Members of a band led by Jon Batiste, bandleader on ‘The Late Show with Stephen Colbert,’ march Saturday

In Washington dozens of National Guard troops from South Carolina were seen checking out of their Washington, D.C., hotel shortly before President Donald Trump tweeted he was giving the order to withdraw guard forces from the nation’s capital.

Trump had ordered guard troops into D.C. to ‘dominate’ the streets after some protests over the killing of George Floyd turned violent.

The city’s mayor called on the president last week to withdraw outside forces amid days of largely peaceful protests.

Images on social media on Friday night about an hour after a Brooklyn protest ended showed officers surrounding a group of protesters and chasing down some with batons. And officers on Manhattan’s East Side also used force to break up remnants of a march that started near the mayor’s official residence.

There were about 40 arrests citywide Friday – far fewer than previous nights – and no obvious signs of the smash-and-grab stealing that marred protests earlier in the week.

On Saturday, Antoinette Henry wasn’t surprised people were still marching after more than a week, even though she said she had seen violence from police earlier in the week. 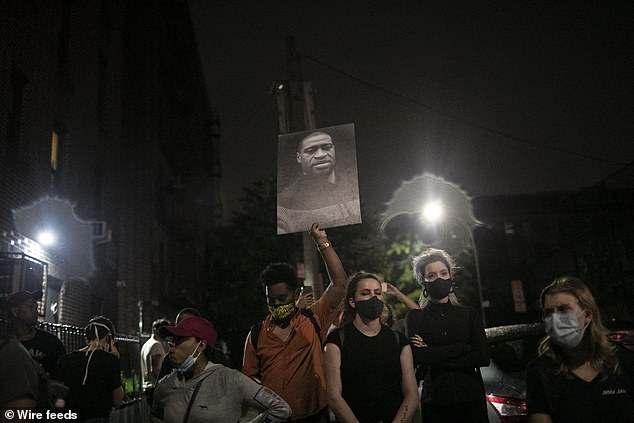 There were about 40 arrests citywide Friday – far fewer than previous nights – and no obvious signs of the smash-and-grab stealing that marred protests earlier in the week. People watch as police arrest protesters Friday in Brooklyn 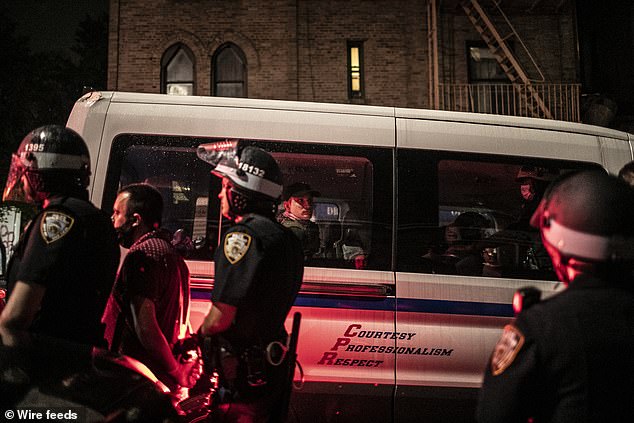 ‘Our first couple of protests ended a bit violently but we’re back out here. We’re not going to stop fighting,’ Henry said.

She added she thinks protests could continue next week, even as some will go back to work when New York City begins its reopening.

‘I think as long as we stay organized, that´s exactly what can and will and should happen,’ Henry said.

‘Get a test. Get a test,’ New York Gov. Andrew Cuomo urged people who have been participating in rallies and marches in memory of George Floyd.

He said the state planned to open 15 testing sites dedicated to protesters so they can get results quickly.

‘I would act as if you were exposed, and I would tell people you are interacting with, assume I am positive for the virus,’ Cuomo added. 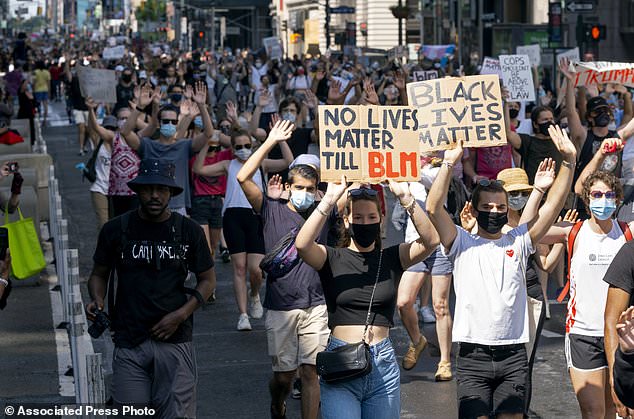