The Norway mosque shooter who killed his Chinese step-sister before trying to gun down Muslims has apologised for ‘not causing more harm’ in the incident.

On the first day of his trial today in Oslo, Philip Manshaus, 22, said that it was an act of ’emergency justice’ and claimed he was ‘preventing genocide of the white race’.

In court he denied charges of murder and terror read to him by a prosecutor, the Norwegian news agency NTB said.

Manshaus has acknowledged the facts but denies the accusation, saying he opposes non-Western immigration. 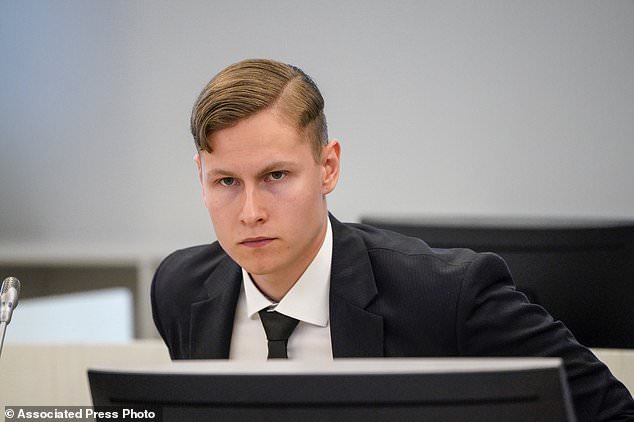 Defendant Philip Manshaus appears in court on charges of murder and terrorism in Olso, Norway, today 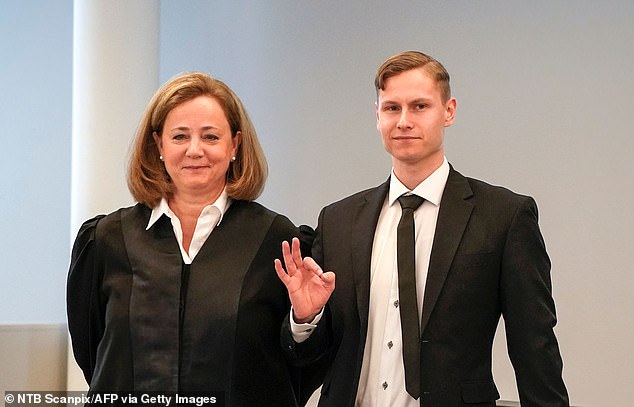 Broadcaster NRK said that during his testimony Manshaus claimed the white race ‘will end up as a minority in their own home countries’ and criticised those who ‘blackmail national socialism.’

In court he described how on August 10 last year he killed his 17-year-old stepsister, Johanne Zhangjia Ihle-Hansen, by shooting her four times – three in the head and one in the chest – with a hunting rifle at their home in the Oslo suburb of Baerum. Ihle-Hansen was adopted from China as a two-year old.

Shortly after that, Manshaus said he drove to a nearby mosque where three men were preparing for Eid al-Adha celebrations. He wore a helmet with a video camera attached and a bulletproof vest. 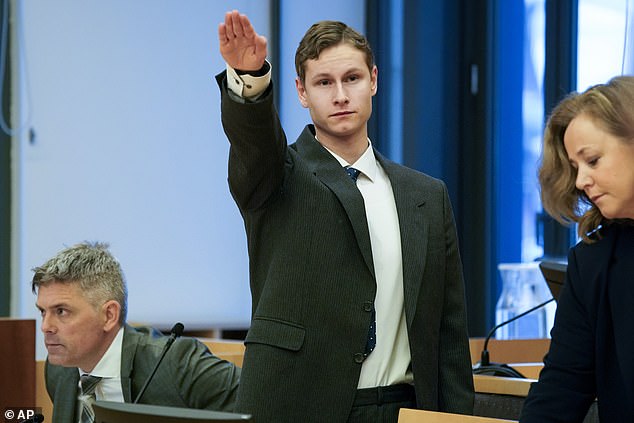 Philip Manshaus raises his arm in a Nazi-style salute at a court hearing in Oslo last November, four months after the incident

Manshaus was armed with a hunting rifle and a shotgun and fired four shots with the rifle at a glass door before he was overpowered by one of the men in the mosque at the time, Muhammad Rafiq.

During the scuffle, two more shots were fired but no one was hit. Rafiq was slightly injured in the struggle. In his testimony, Manshaus said he wanted to kill Rafiq.

‘I did everything I could to carry out the attack,’ he told court, adding he was exhausted when police arrived.

The prosecution says Manshaus acted ‘with the intention to kill as many Muslims as possible’.

Some 30 witnesses, including the men at the mosque and Manshaus’ father, are expected to give evidence.

If found guilty, Manshaus could face up to 21 years in prison. The prosecutor has said it would consider a sentence where he would be sent to a secure mental facility for as long as he is considered a danger to others.

Norwegian media have reported that Manshaus was inspired by shootings in March 2019 in New Zealand, where a gunman targeted two mosques, killing 51 people, and in August 2019 in El Paso, Texas, where an assailant targeted Hispanics and left at least 22 dead.

Manshaus’ plans and his reference to national socialism also recall those of Norwegian right-wing extremist Anders Behring Breivik, who in 2011 killed 77 people in a bombing and shooting rampage.

Breivik, who gave a Nazi salute in the court room, is serving a 21-year prison sentence for carrying out a terror attack.

Norway’s domestic security agency PST said it had a ‘vague’ tip about Manshaus a year before the shooting, but it was not enough to act on because they had no information about any ‘concrete plans’ of attack.