Jaquiski Tartt would like to have that one back, but at least he owned up to it.

The San Francisco 49ers safety dropped what may have been the easiest interception of his NFL career on Sunday during the NFC championship game. Plenty went wrong for the Niners in a fourth quarter that started with San Francisco up 17-7 and ended with them losing 20-17, but Tartt's drop stood out as the worst missed opportunity.

The play came with the Niners up 17-14 and a little under 10 minutes left, when Rams quarterback Matthew Stafford uncorked a huge pass into San Francisco territory and watched it sail right into Tartt's hands. It was such an easy play that Fox Sports announcer Joe Buck initially thought Tartt had made the play, but then Tartt bobbled the ball, bobbled it again and the ball fell to the ground.

Rather than go back on defense, the Rams continued to drive and eventually settled for a field goal, a three-point swing in a game decided by three points.

Athletes have reacted to less mortifying mistakes by declining to talk to anyone after the game. Tartt could have easily done that and had no one hold it against him, but he instead owned the mistake, both on social media and in person with reporters.

Mere minutes after the game, he posted a tweet saying he deserved all criticism and vowed to get better.

No excuses!! I deserve all the criticism my way! Opportunity I dream of I came up short!!! Let my brothers down!! It Still won't define me as a person/player. Only will get stronger and better… #Believdat

Then he appeared before reporters and answered questions about the worst play of his career.

Tartt on his dropped INT: “That’s a play I should make in my sleep" pic.twitter.com/mYlL53DB4X

“As a player, I feel like I let my brothers down…”It’s a moment a lot of athletes dream of…. You can make this game-changing play & when the play came up, I didn't make it." pic.twitter.com/qM3ix0C15Y

"Obviously, my play was a crucial one … I really wish that I could have it back, but at the end of the day, take your hat off to the Rams. They came in and did what they had to do.

"I see [Stafford's pass], and I'm like 'He f***ed up. We about to win this game.' It hit my hands, I thought I had it and I don't know how I dropped it. I didn't drop a ball in practice all week, caught everything that came my way. There ain't much you can do to practice alone like that. The only time you get that moment is when you get it. For me, it's the moment of truth. The moment of truth showed and I didn't step up. 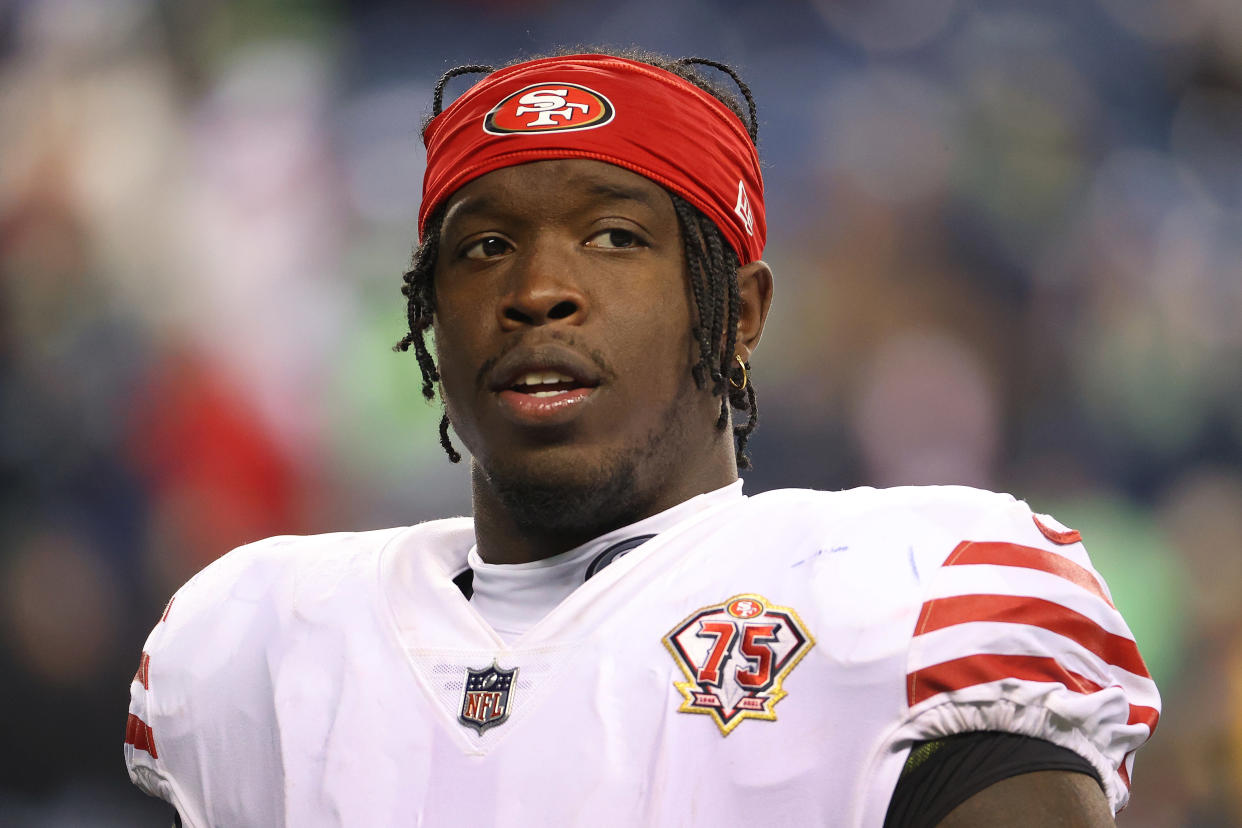 Say what you will about Tartt's performance on the field — he finished the game with six total tackles — but publicly accepting fault like that is something not every player would do. Plentyofreporterscertainlyappreciated him coming to the podium.

The Niners also fully stood by their player, from head coach Kyle Shanahan to tight end George Kittle, the latter of whom noted the Niners might not have even played in the NFC championship had it not been for a hustle play by Tartt against the Green Bay Packers.

Ward’s message to Tartt after the dropped INT: pic.twitter.com/vauoecmS03

George Kittle points out that without Jaquiski Tartt’s hustle play at the end of the first half against the Packers, the #49ers probably wouldn’t have even made it this far.

Tartt is now scheduled to hit free agency after playing the last season for the Niners on a one-year, $1.128 million contract. In 14 regular season games, he had 66 tackles and five tackles for loss.