New Zealanders queue up for haircuts at MIDNIGHT as lockdown is lifted: Friends mingle and shoppers return to malls as country enters ‘new normal’ today

New Zealanders welcomed the end of their country’s 51-day coronavirus lockdown at midnight on Wednesday by lining up on the street at to get their hair cut.

Businesses including salons, coffee shops, restaurants and shopping malls threw open their doors in the early hours after the country downgraded to ‘level 2’ of its alert system.

Virtually all businesses except bars are now allowed to open with some social distancing and PPE measures in place, while people can socialise freely in groups of up to 10 people.

It comes after the country successfully flattened the curve of infection, reporting zero new cases on Thursday for the third straight day. New Zealand has a total of just 1,497 cases and 21 deaths.

As the country adjusted to its ‘new normal’, Prime Minister Jacinda Ardern unveiled a budget which included a record US$30billion stimulus to help shore-up businesses – but warned it may not be enough to save every job. 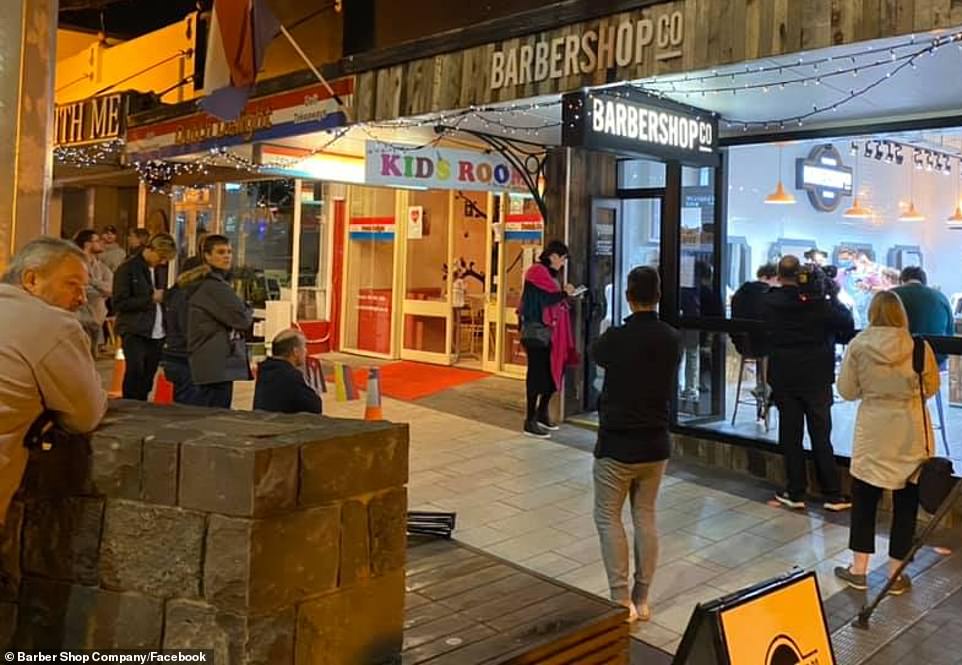 New Zealanders queued up outside hairdressers overnight (left) as the country moved to ‘level 2’ of its coronavirus alert system, meaning all businesses except bars are allowed to reopen with some social distancing and PPE in place 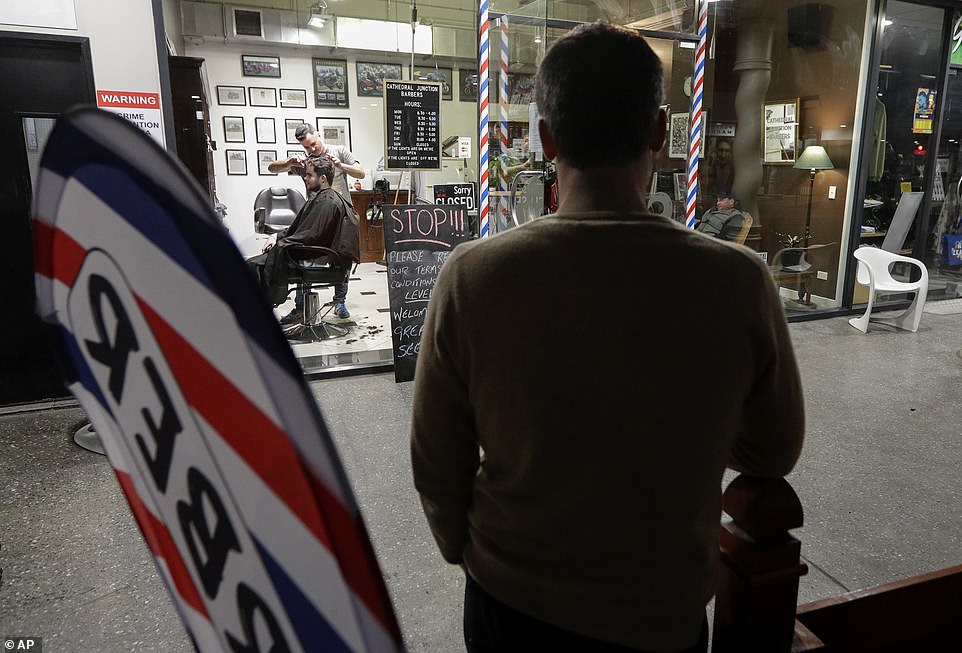 Barber shops were closed 51 days ago in New Zealand along with much of the economy in order to flatten the curve of coronavirus infections – which the country has now done, reporting zero new infections for three days running 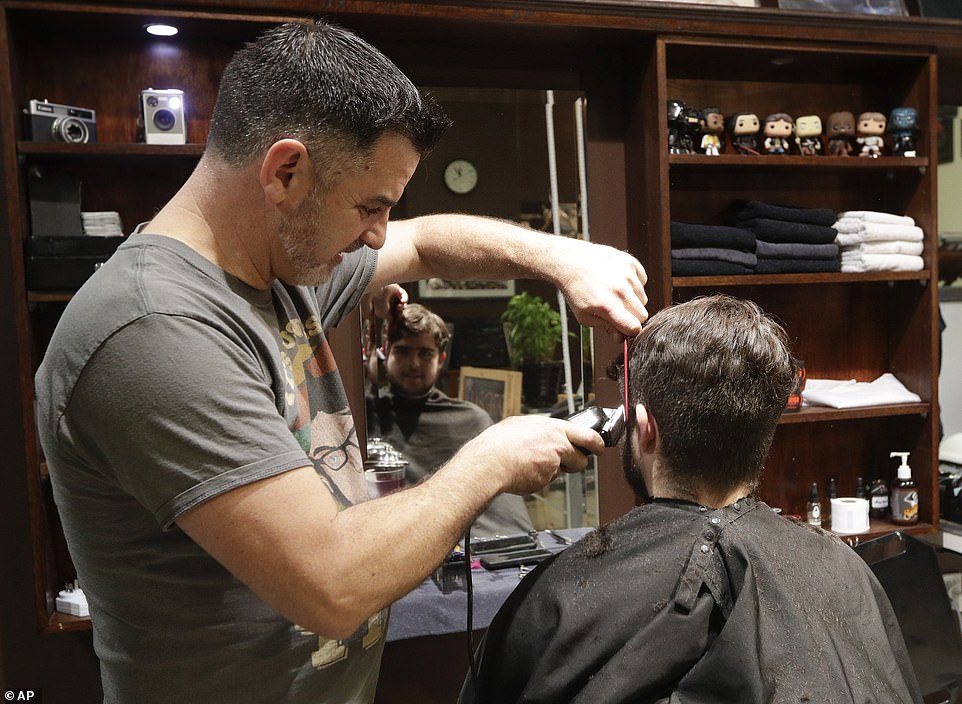 Cathedral Junction Barbers owner Conrad Fitz-Gerald cuts the hair of his son Heathcliff as people queue up just past midnight to get a trim in Christchurch, New Zealand 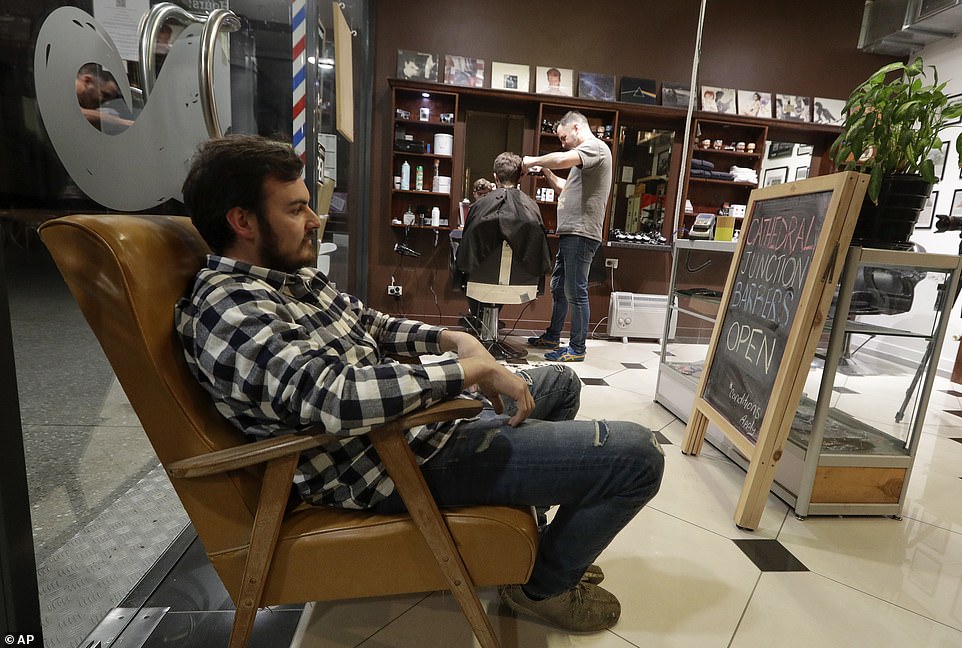 A man waits in line at Cathedral Junction Barbers in Christchurch, New Zealand, to get his hair cut shortly after midnight after almost all businesses were allowed to reopen 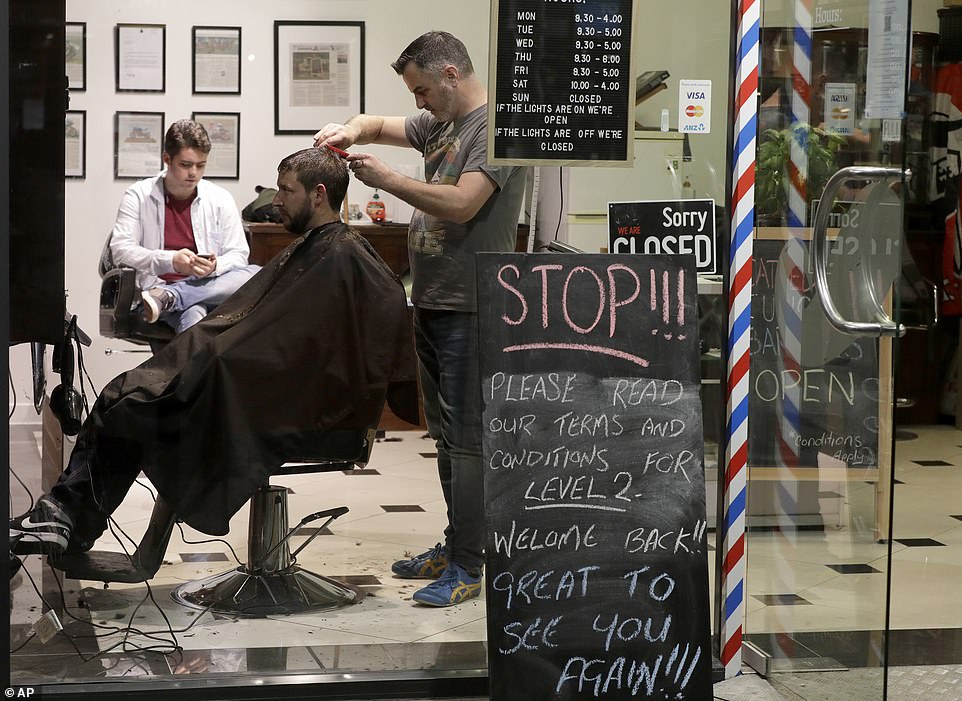 New Zealand is attempting to restart its economy following 51 days of shutdown, with the government unveiling a US$30billion stimulus package to help save jobs and businesses 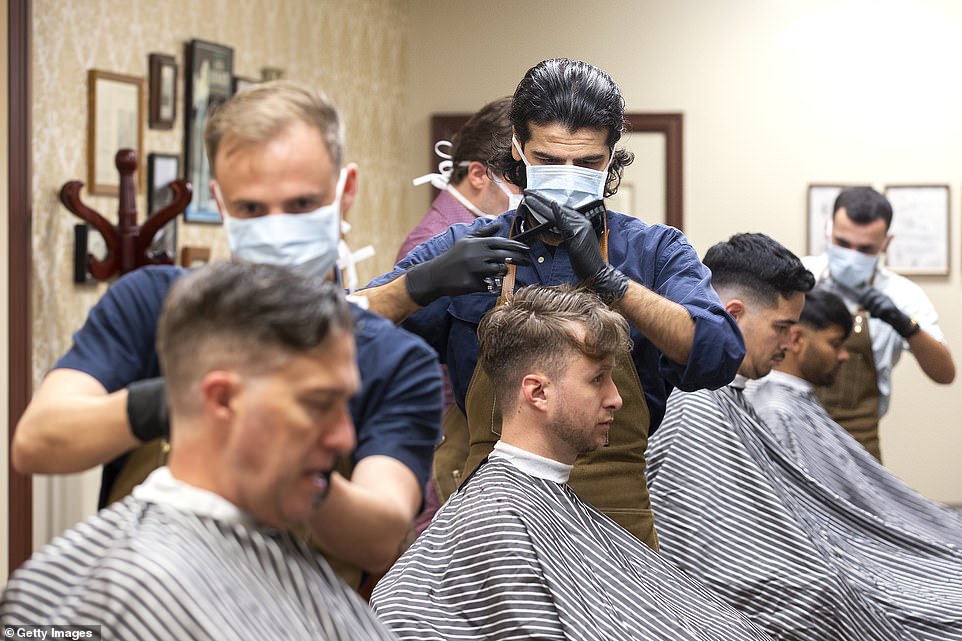 A full hair salon in Wellington, New Zealand, is seen shortly after midnight after the country dropped down to ‘level 2’ of its coronavirus warning system and almost all businesses were allowed to reopen 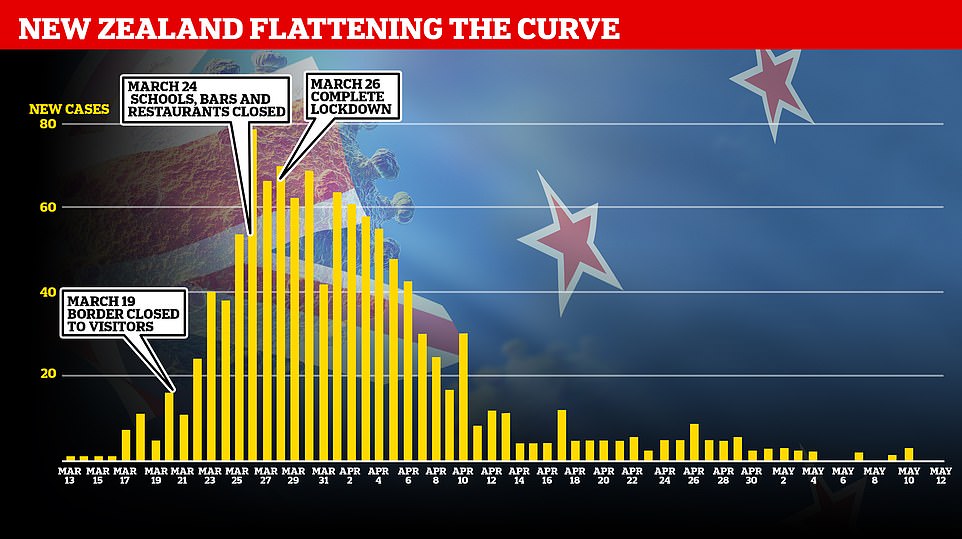 New Zealand reported a third straight day of zero coronavirus cases on May 13, marking the fifth time in the last 10 days that cases have dropped to nothing (data correct up to May 12)

The massive budget – which includes billions on infrastructure, healthcare, housing and wage subsidy schemes – sets the stage for Ardern’s re-election campaign, as her centre-left government seeks to consolidate support ahead of the September poll.

Ardern said the priority was to stop massive unemployment and described the package as a ‘jobs’ budget.

The billions will be spent over a four-year forecast period and is more than any New Zealand government has ever spent in one budget.

‘Nothing about this time in our history is usual and so neither should our response be,’ Ardern told lawmakers in a speech to parliament.

Economic forecasts released with the budget cast a grim picture for the years ahead, with unemployment seen spiking to nearly 10 per cent by June from 4 per cent currently.

Ardern has been widely praised for what is currently seen as a best-in-class response to coronavirus, but must now convince voters the economic hardships they are about to suffer were worth it.

Thursday was a day for celebration, however, with the country lifting lockdown measures well in advance of other developed nations – as Kiwis celebrated a hard-won taste of freedom

At least three Auckland barbers opened their doors at 12:01am on Thursday morning to trim a small but enthusiastic group of late-night patrons.

‘It feels like freedom,’ Auckland man Phillip Harkness told Stuff after being one of the first to receive a post-lockdown cut.

A 17-year-old boy, Corbin Harkness, told The New Zealand Herald he had been waiting a long time for a haircut.

‘I was going to get one the day they shut down,’ Mr Harkness said.

In addition to hairdressers and barbers, who must wear PPE, restaurants, retail, cinemas and gyms can now reopen, all with tweaked rules to ensure social distancing and improved hygiene. 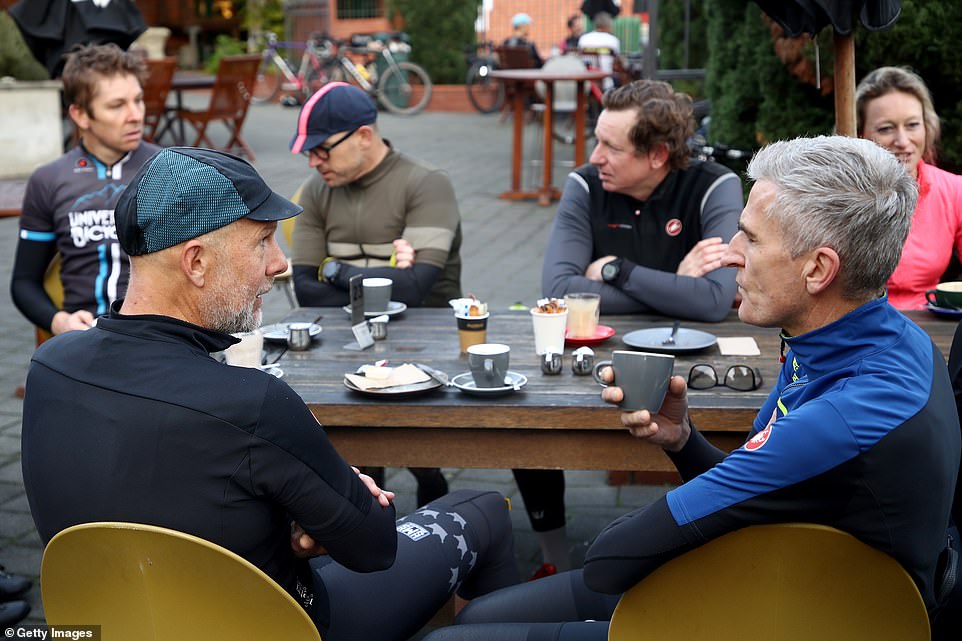 Hair salons were followed later in the day by coffee shops and restaurants which reopened their doors with groups of up to 10 people allowed to socialise inside, with no need to remain in social ‘bubbles’ 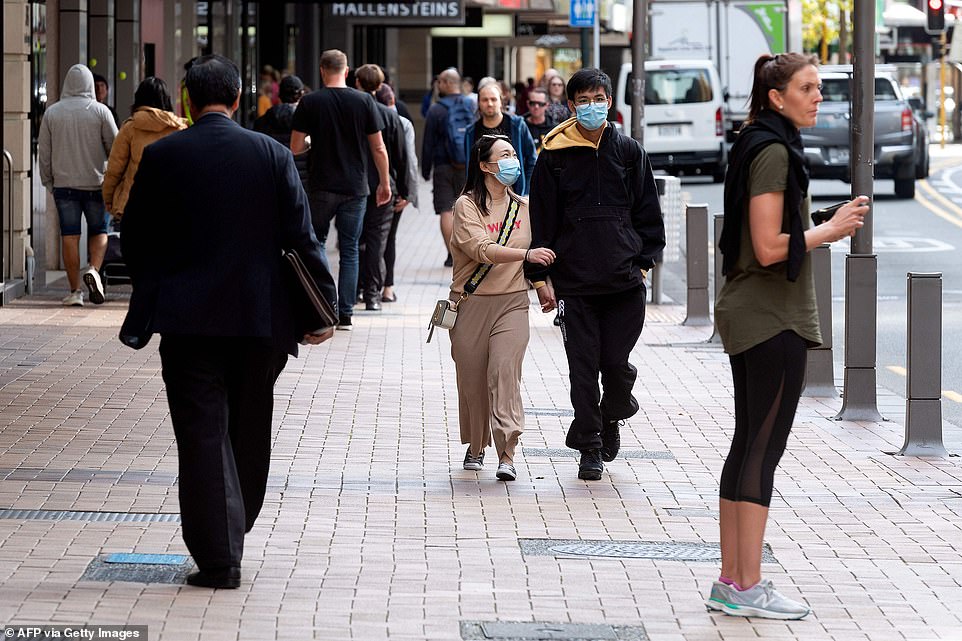 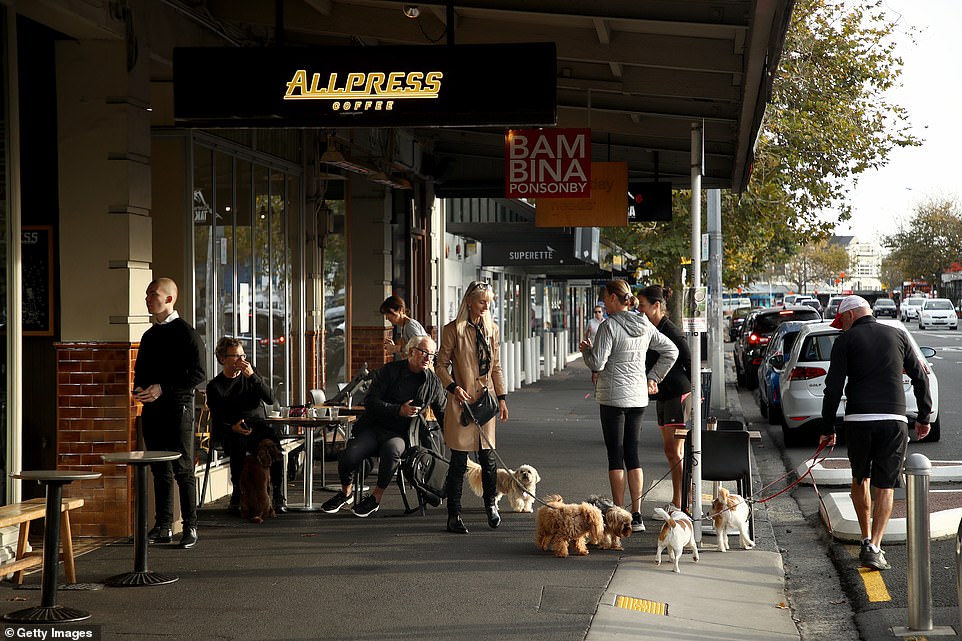 Groups of people stopped to speak with each other outside this coffee shop in Auckland, New Zealand, as the new rules no longer made it necessary to stick to a ‘bubble’ of approved contacts 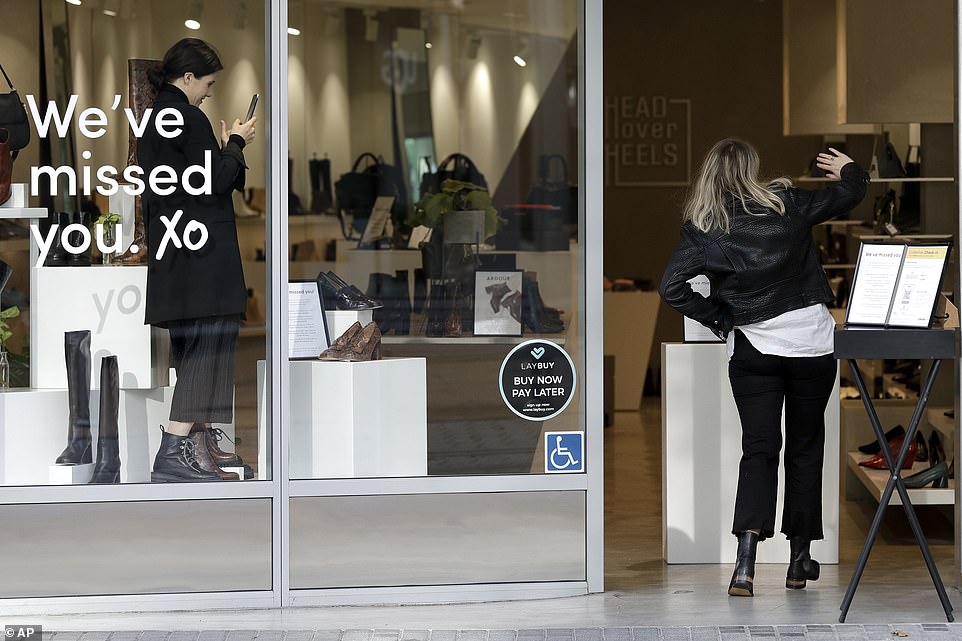 A customer gestures as she walks into a store in Christchurch, New Zealand, as customers were welcomed back 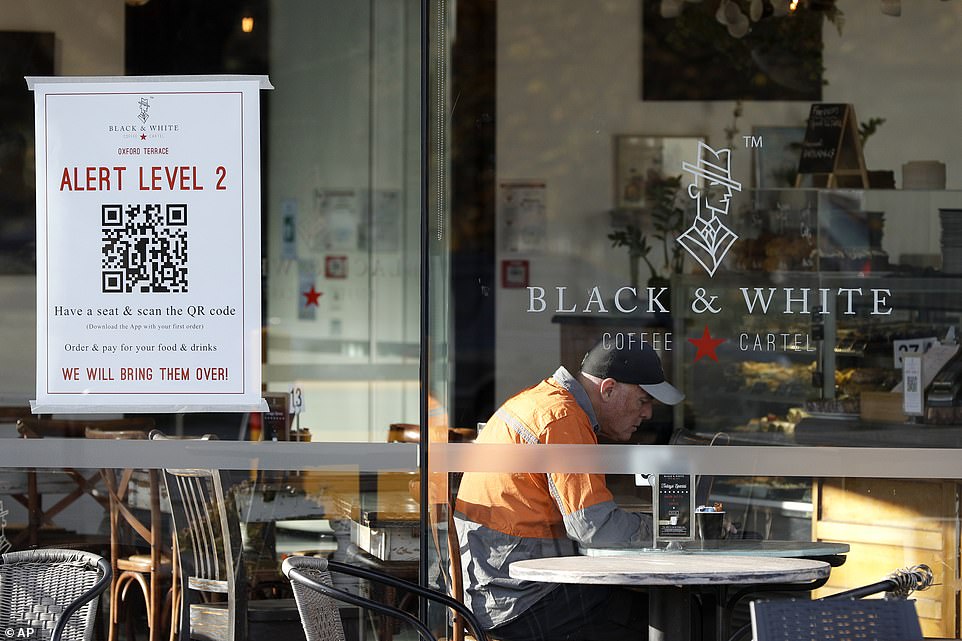 A man enjoys coffee in a cafe in Christchurch, New Zealand, with a sign advertising new social distancing measures which will remain in place even while the country reopens 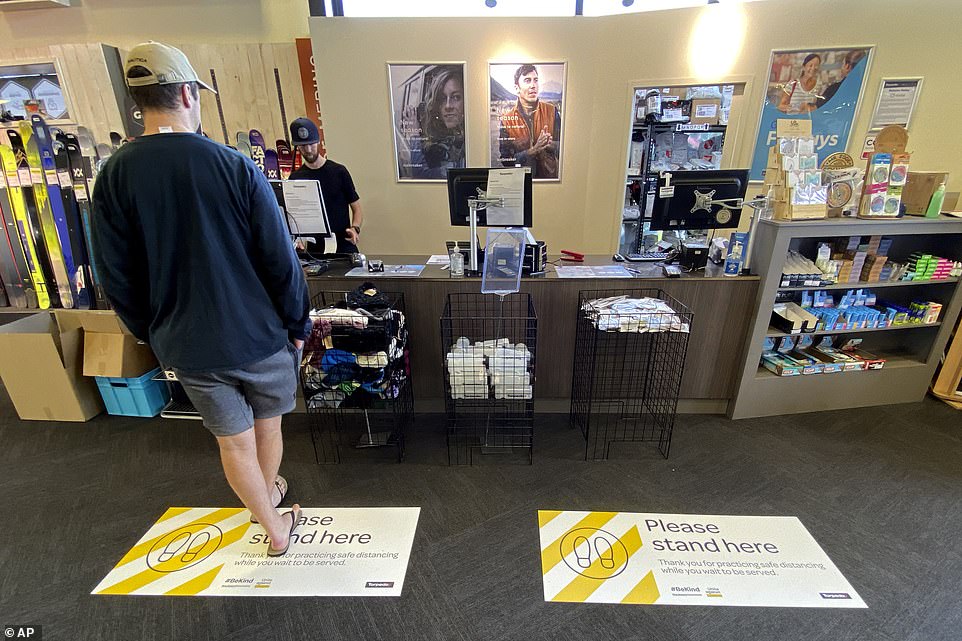 Despite shops reopening, New Zealanders will have to adjust to a ‘new normal’ that will see social distancing measures in place for the foreseeable future 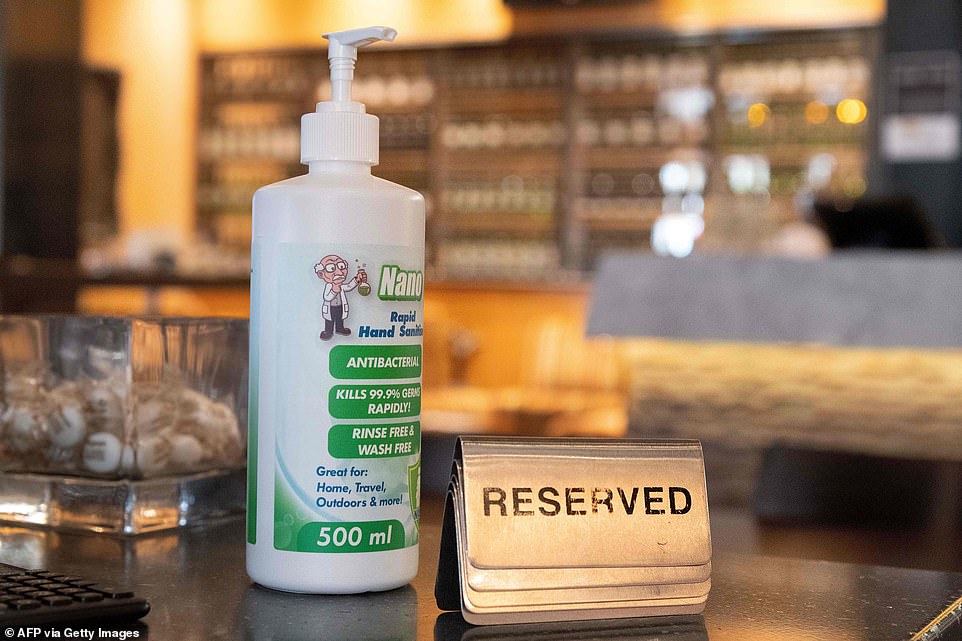 A bottle of hand sanitizer sits on the table of a newly-reopened restaurant in Wellington, New Zealand, as the country gets used to its ‘new normal’ while living with coronavirus 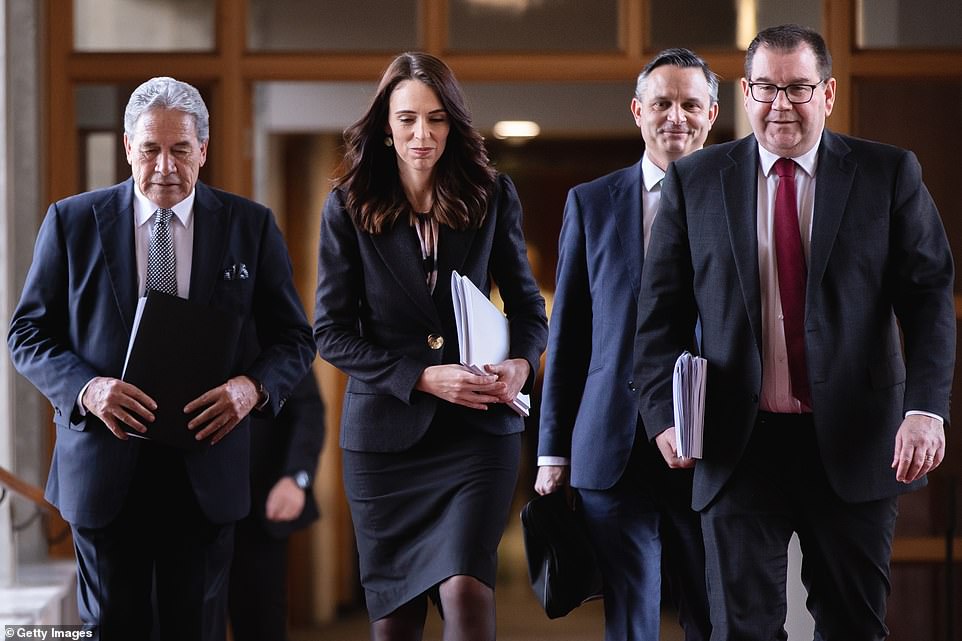 Many office workers, who have been asked to work from home for the past seven weeks, were also finally allowed to return to their workplaces.

Schools will reopen from next week, as well as bars.

The country’s oldest zoo, Wellington Zoo, has also flung open its gates for the first time since the lockdown, making entry free until the end of June to encourage visitors back.

But the country will still see significant changes to daily life compared to before the outbreak, with parties still banned and gatherings limited to 10 people – except funerals, which can take up to 50.

Social distancing of up to 3ft is still recommended inside businesses such as restaurants, cafes and stores, while people are being warned to stay 6ft away from each-other in public.

Transport networks including air travel can expect to see significant changes even amid the easing, with signs up across airports showing passengers where they can and cannot sit to maintain distancing. 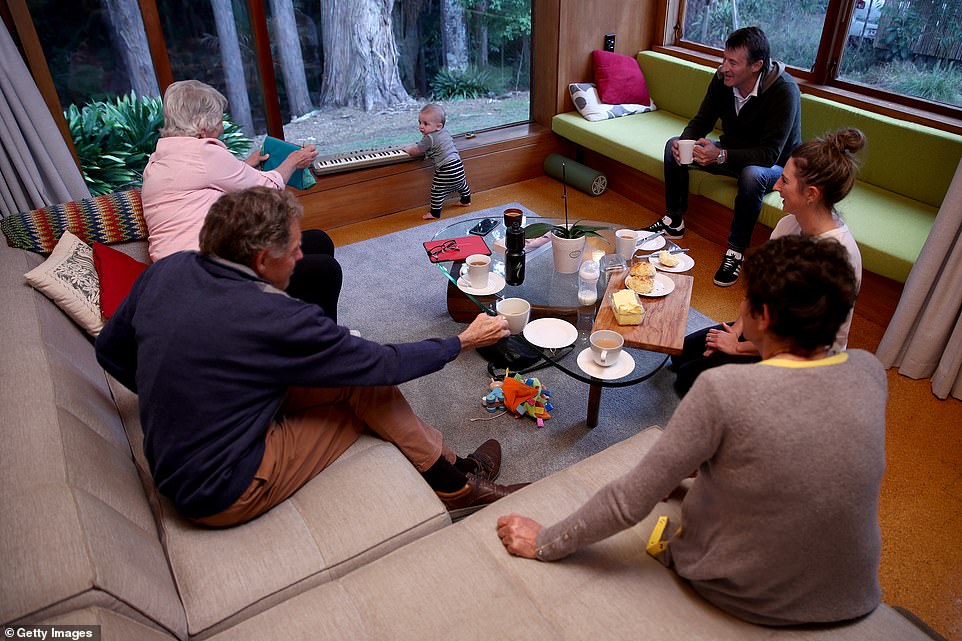 Grandparents Sue Eng, John Walter, Jan Walter and Doug Eng are reunited with their eight-month-old grandson Soren Walter after not being able to see him for two months due to the lockdown 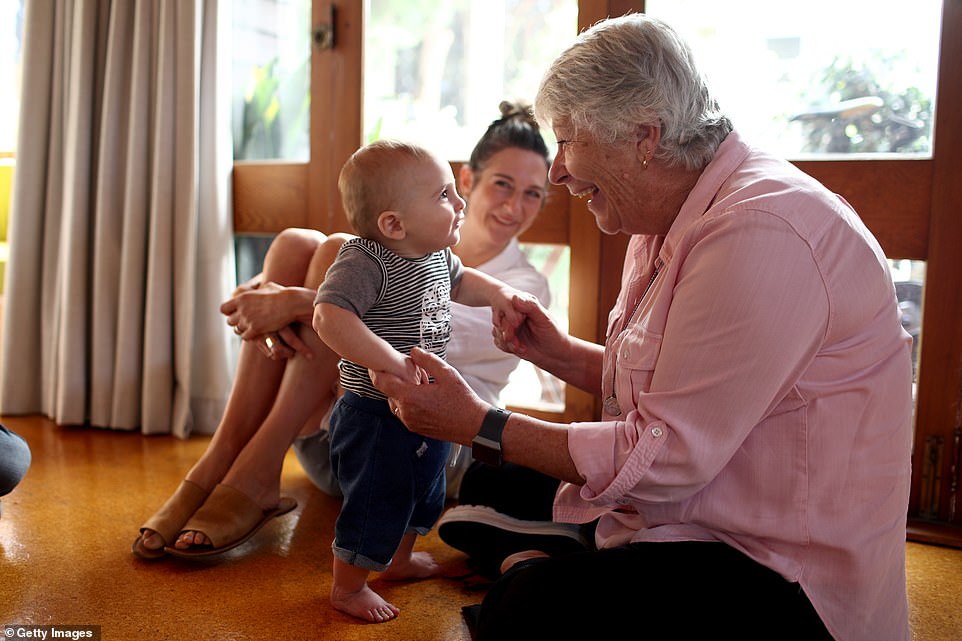 Sue Eng plays with her grandson on Thursday after rules around socialising with vulnerable people were relaxed, with groups of up to 10 allowed, as New Zealand dropped to ‘level 2’ 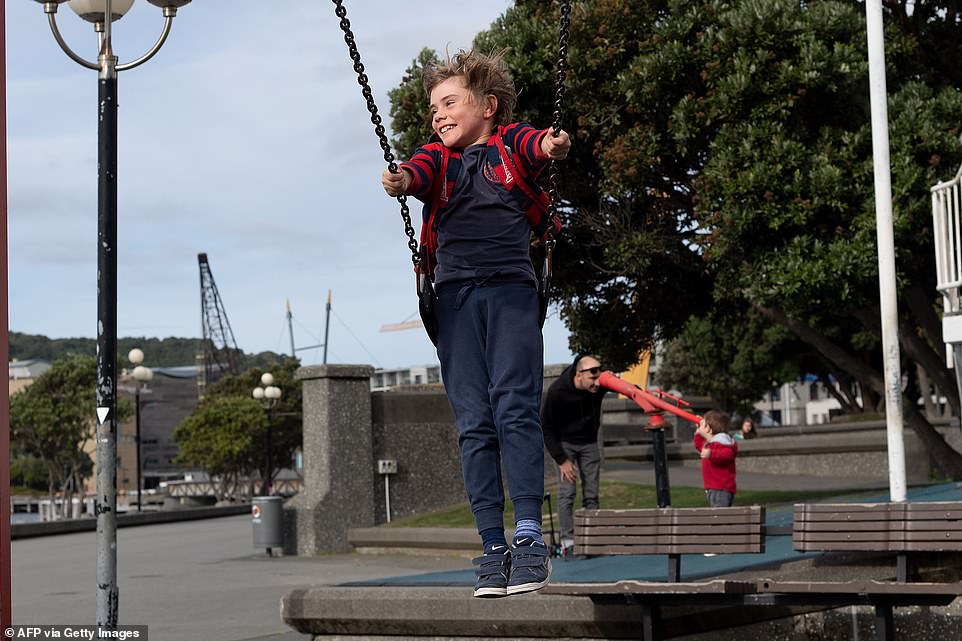 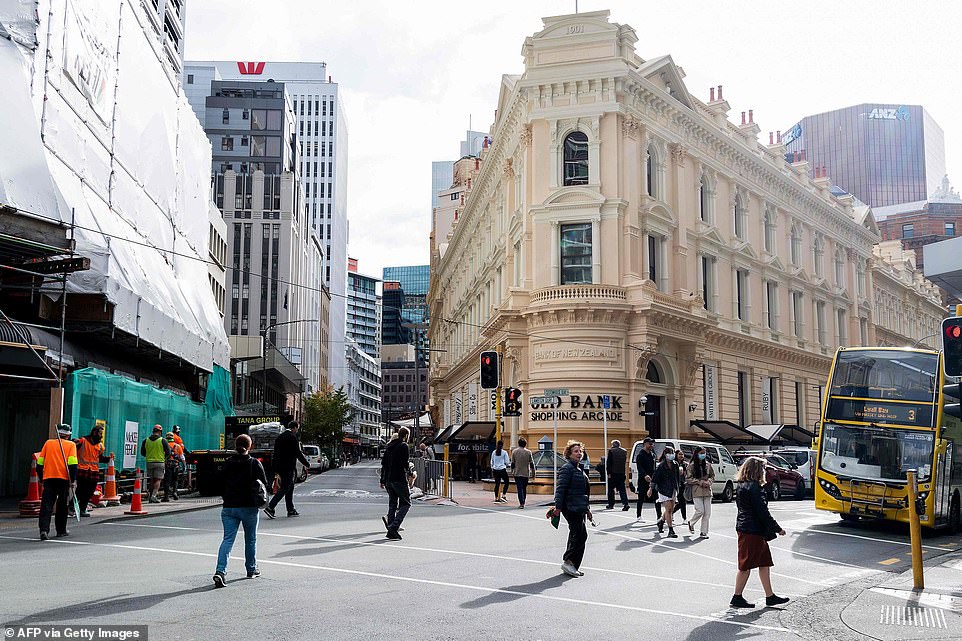 People walk along the streets in Wellington, New Zealand, after most businesses were allowed to reopen meaning commuters resumed their daily routines 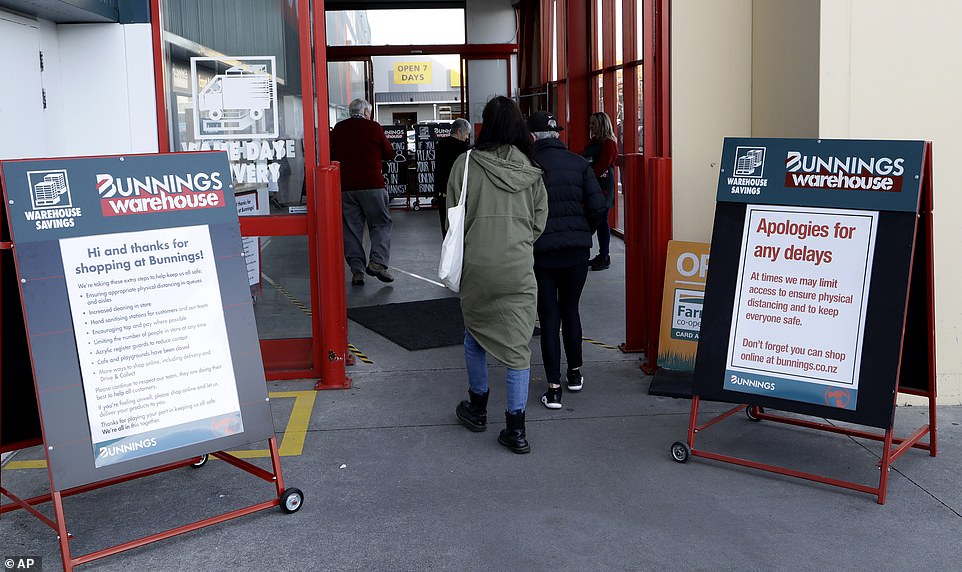 People walk into a Bunnings DIY store in Christchurch, New Zealand, which was allowed to reopen with social distancing in place as New Zealand finds its way to a ‘new normal’ 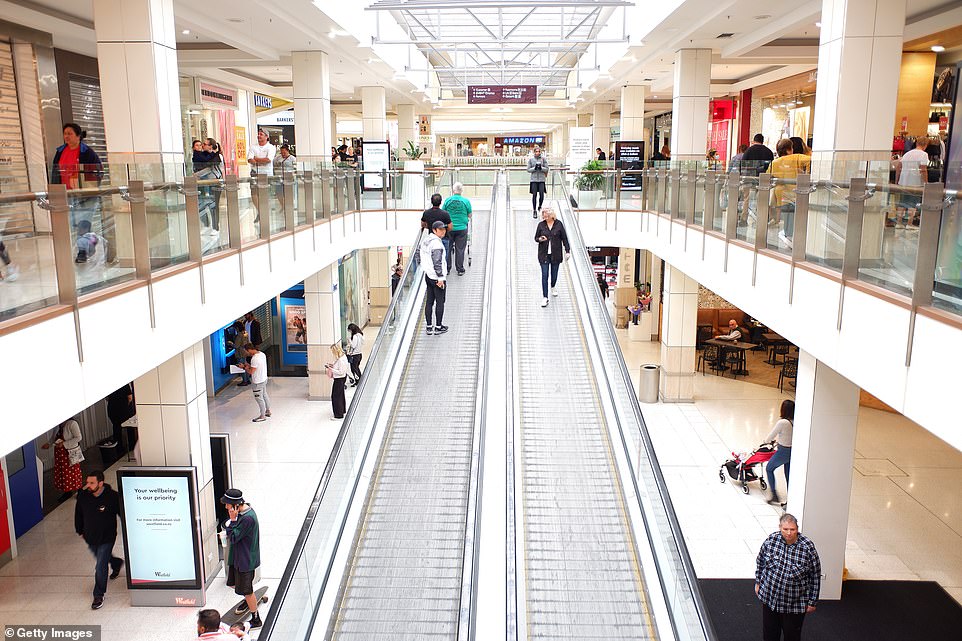 Shoppers returned to the St Lukes shopping mall in Auckland, New Zealand, after it was allowed to reopen on Thursday 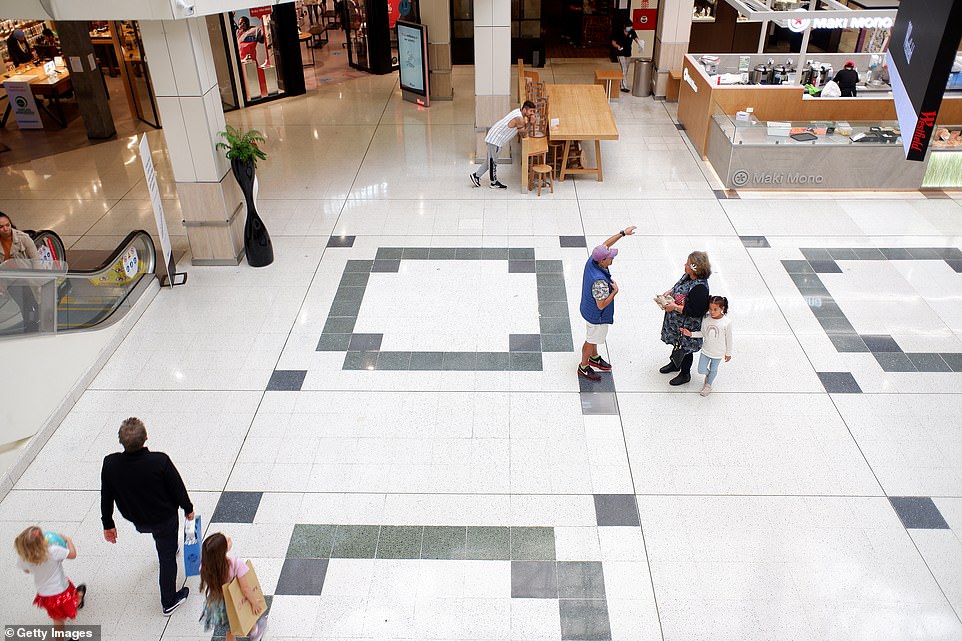 Most retail businesses including malls have been allowed to reopen under ‘level 2’, but with social distancing in place 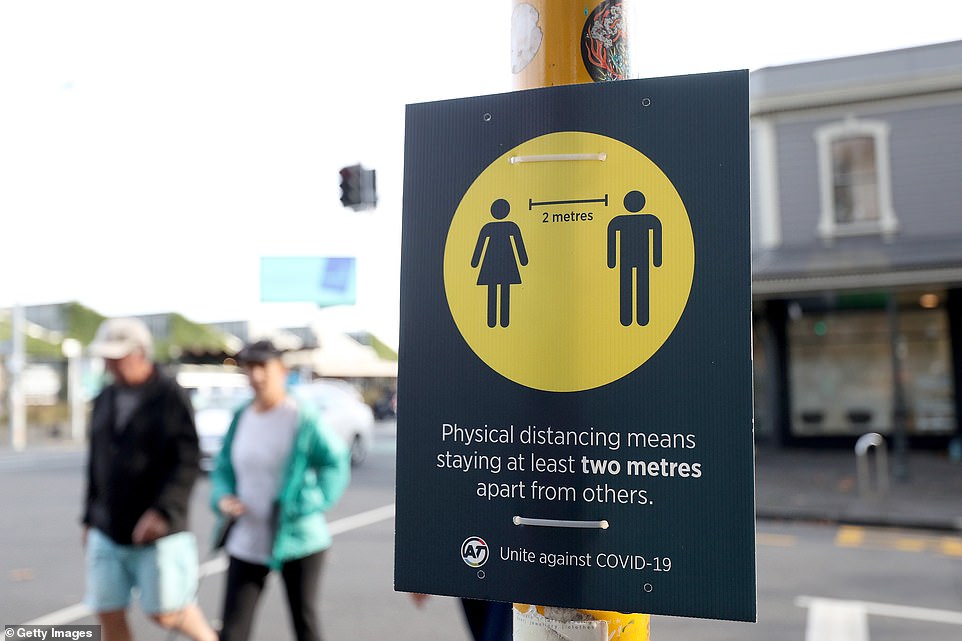 A social distancing sign is seen at a pedestrian crossing in Auckland, New Zealand, as the country adjusts to its ‘new normal’ 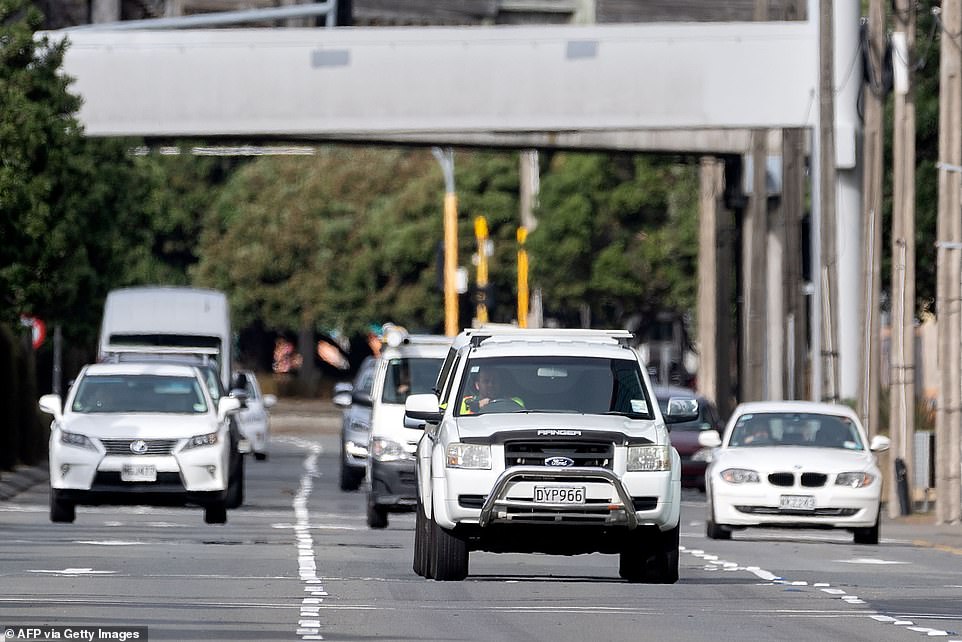 Commuters return to the roads in Wellington, New Zealand, as the country continues easing its coronavirus lockdown

The easing will allow domestic tourism to fire up – with travel between regions now permitted – but New Zealand is also heavily dependent on foreign visitors, with no sign that international flights are about to resume.

Jim Boult, mayor of Queenstown which is almost entirely reliant on visitors for income, welcomed the move to allow travel across the country, but faces an uncertain long-term future for his town.

‘Enthusiasm for local travel will bring a much-needed boost to our local economy and the thousands of locals that will benefit from the return to work this will deliver,’ said Boult.

New Zealand will now face many of the same difficulties as other countries which have either lifted restrictions or avoided lockdown altogether – namely undetected clusters of infection, and importing cases from overseas.

South Korea, also widely praised for its virus response, is currently battling to contain an outbreak centered around nightclubs in Seoul which has seen dozens of people test positive for coronavirus and thousands exposed. 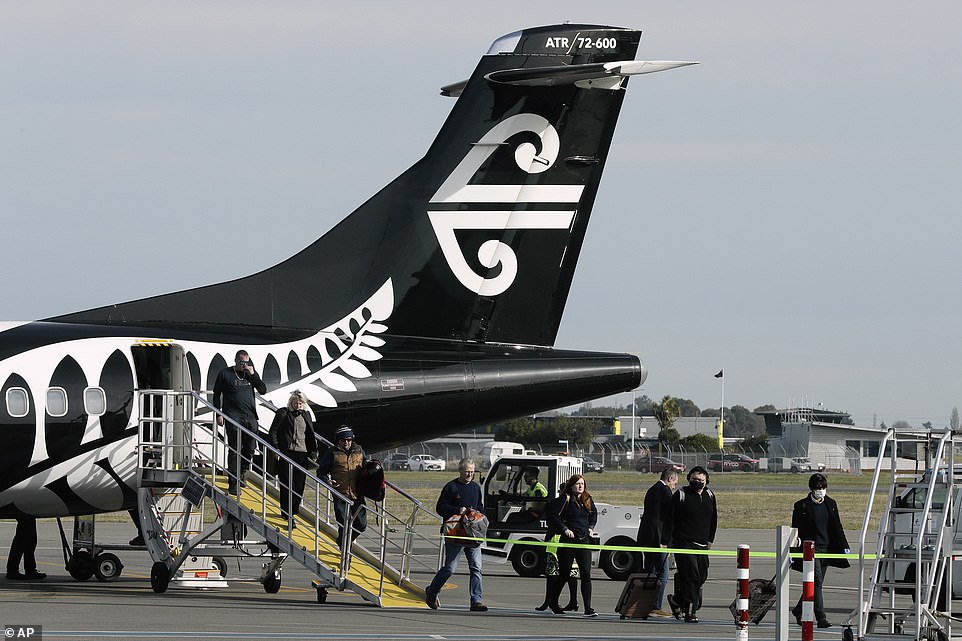 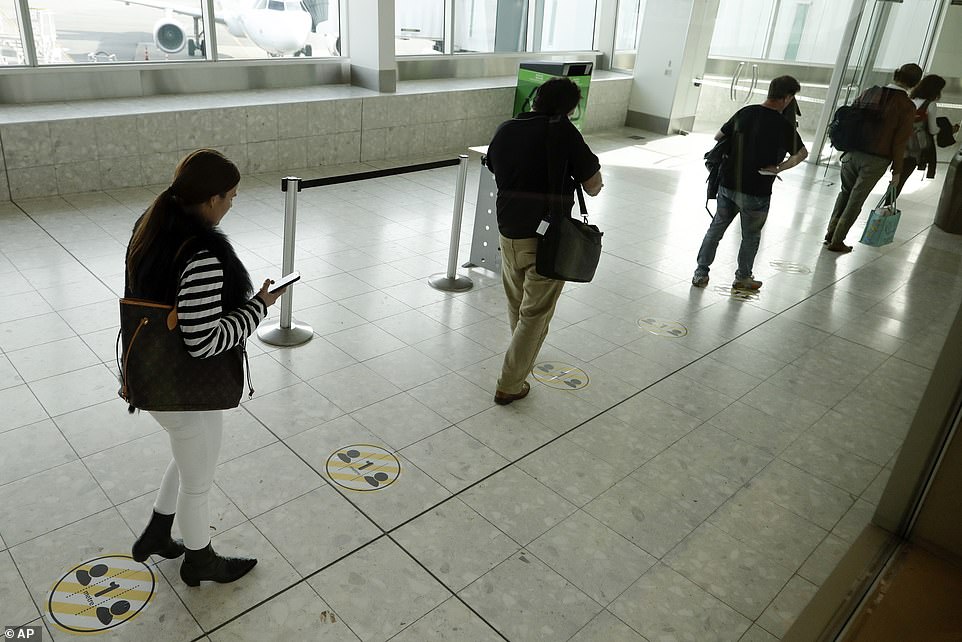 Passengers queue up keeping a 1m social distance inside the airport in Christchurch, New Zealand, as the country adjusts to its ‘new normal’ while living alongside coronavirus 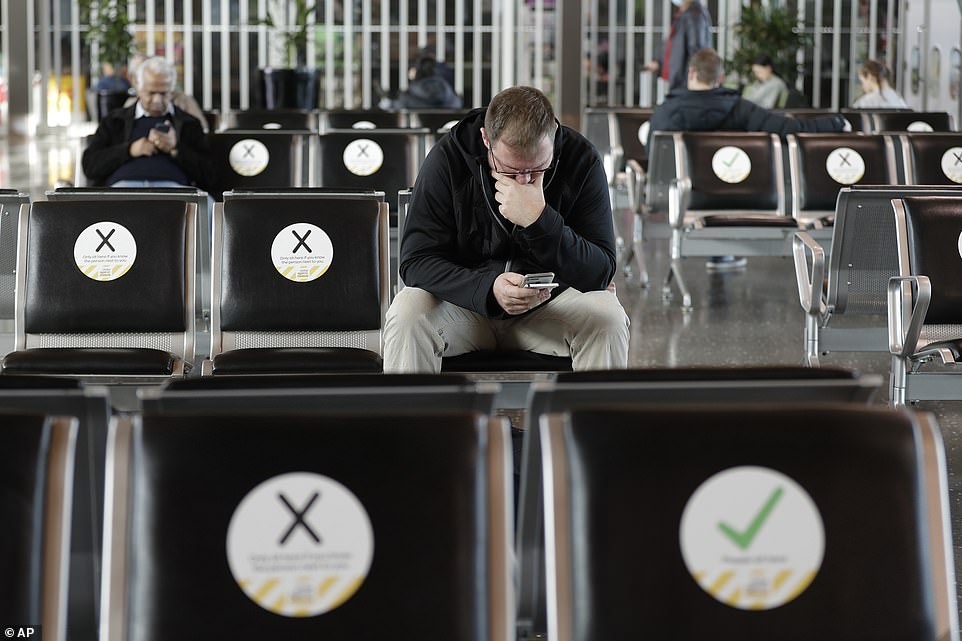 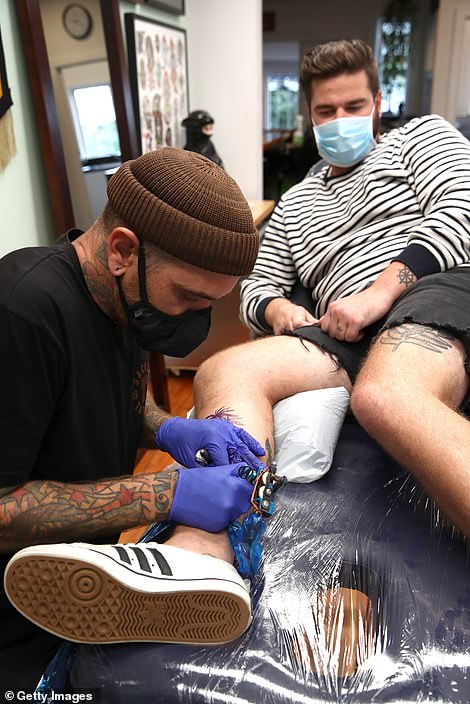 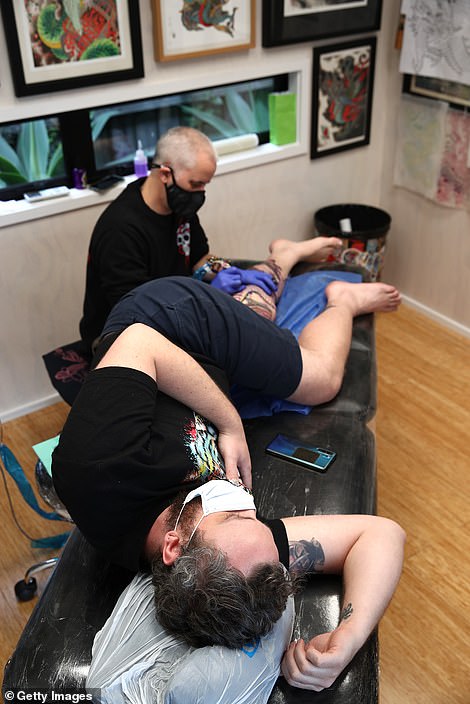 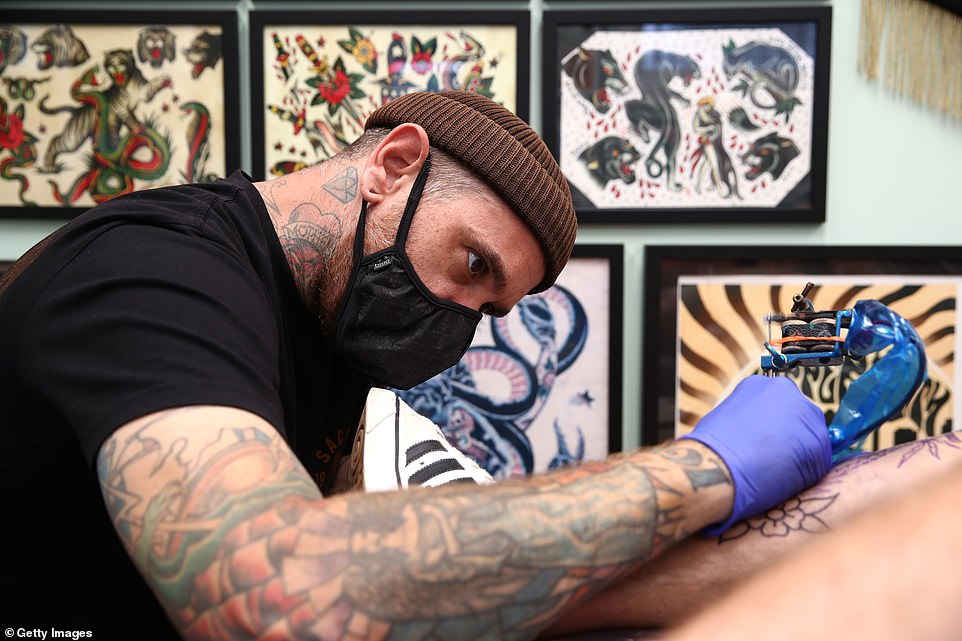 Tattoo artist Steve Wood works on a customer at the Sacred Tattoo Studio in Kingsland, Auckland, after reopening

The country has confirmed 29 more coronavirus cases over the past 24 hours as it battles a spike linked to nightlife spots in Seoul.

The additional cases reported by the Korea Centers for Disease Control and Prevention pushed the national total to 10,991 with 260 deaths. Most of the new cases were people infected locally while three came from overseas.

South Korea’s caseload has climbed in the past week, with new cases linked to nightclubs in Seoul’s entertainment Itaewon district threatening South Korea’s hard-won progress in containing the virus.

Meanwhile residential compounds in Wuhan have begun testing inhabitants for the coronavirus as a program to test everyone in the Chinese city of 11 million people in 10 days got underway.

China has been battling to tamp out clusters of cases imported from overseas, but in recent days there have been signs of renewed domestic infection – suggesting several cases have slipped the safety net.

The city ordered local communities to test everyone after six new cases surfaced last weekend, the first infections there in more than a month.

Wuhan, where the virus was first detected last December, was the hardest-hit city in China with 3,869 reported deaths. China reported three new cases nationwide for 82,929 cases in total.