EXCLUSIVE: Gloom beneath the glamour: How Elizabeth Taylor’s marriage to John Warner saw her turn into a ‘drunk and a junkie’ – once asking her son with Michael Wilding to inject her with opioid Demerol while ‘f**ked up’ on drugs and clad in only underwear

Elizabeth Taylor, one of the great Hollywood beauties, led an infamously scandalous life with many men and a mindboggling eight marriages.

But as the wife of a US senator living in the stodgy nation’s capital, the glitzy star became a ‘drunk and a junkie,’ according to a shocking new biography surprisingly authorized by La Liz’s own family.

When Elizabeth was married to her seventh husband, Republican Senator John Warner of Virginia in the late 70s, she once summoned one of her adult sons from a previous marriage to her bedroom where she was clad only in revealing underwear.

‘She was pretty f***ed up on something. She was seated on the edge of the bed in her underwear and had a syringe of Demerol, [an addictive opioid] in her right hand,’ recalled Christopher Wilding, son of Taylor’s second husband, the British actor Michael Wilding.

‘She pointed to a spot on her thigh,’ and asked him to inject the needle. When he couldn’t, the Oscar-winning star ‘steadied her hand and plunged the needle into her flesh.’ 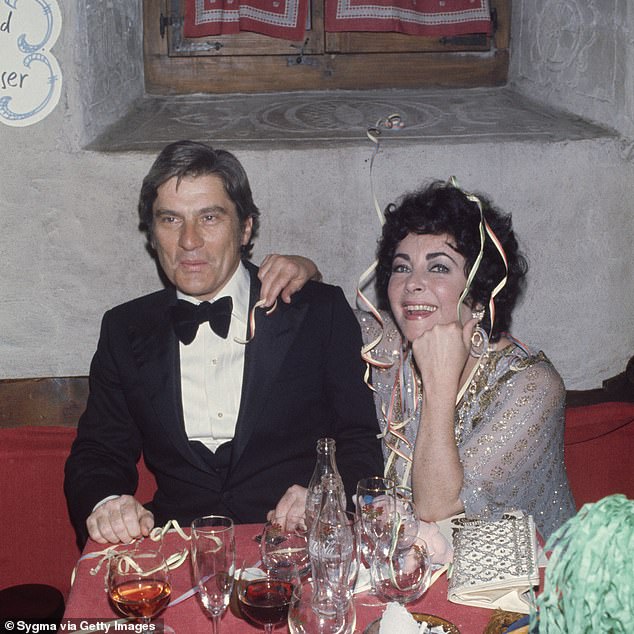 Elizabeth Taylor married her seventh husband Republican Senator John Warner (pictured) in 1976, during which she became a ‘drunk’ and a ‘junkie’ who was addicted to pain meds, according to a new biography 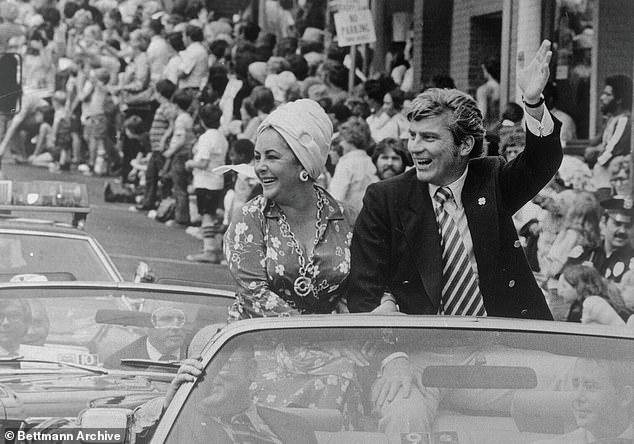 Taylor was so unhappy with her life as a senator’s wife in the conservative Georgetown enclave in Washington, she began overeating and drinking and ballooned 40 pounds. The couple are pictured together at a Charlottesville parade 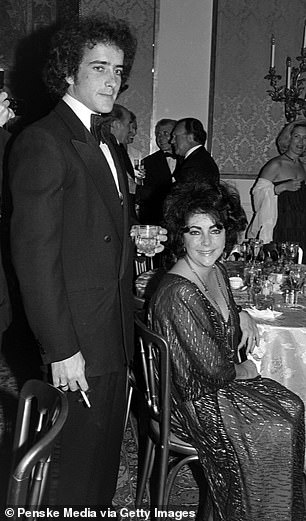 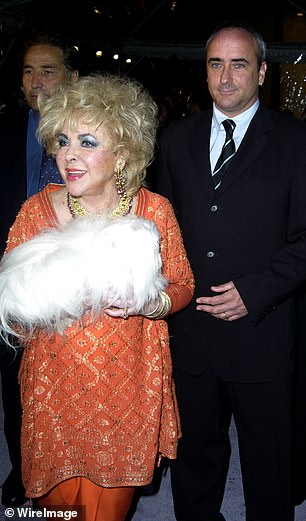 Chris Wilding, (pictured together left in 1978, and right in 2002 ) Taylor’s son with second husband Michael Wilding, recalled once finding his mother in her underwear and holding a ‘syringe of Demerol in her right hand’

It’s one of the many shocking scenes Wilding and others related to Taylor revealed to the author, Kate Andersen Brower, for her explosive new book, Elizabeth Taylor: The Grit and Glamour of an Icon, to be published by Harper on January 6, 2023.

Brower, who says she spent five years researching the book, gained exclusive access to Taylor’s family, friends and correspondence for this first authorized account of the star’s scandalously wild life.

During the Warner marriage, the gorgeous Taylor known for her seductive violet eyes and once spectacular figure – unhappy with her life as a senator’s wife in the ritzy and conservative Georgetown enclave – ate and drank so much that she ballooned 40 pounds to more than 170 pounds, igniting Warner to call her his ‘little heifer,’ writes Brower.

He often ordered her to pour another Jack Daniels and lose herself in TV binge watching.

The marriage lasted six years – a relatively long time for eight-times married Taylor, who was in and out of marriages like a revolving door. 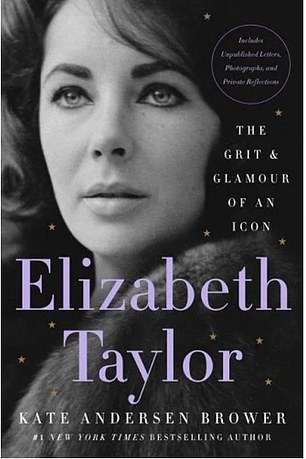 The shocking new biography – due to published January 6, 2023, was surprisingly authorized by La Liz’s own family

After Warner, Elizabeth fled Washington to Florida and the ritzy Palm-Aire spa to shed weight before entering the Betty Ford Center to detox.

Brower dedicated the book to Warner – who died in May 2021 – who wanted Taylor’s story to finally be told.

British actor Richard Burton’s stormy relationship with Elizabeth made tabloid headlines worldwide and gave Taylor ‘an orgasm just listening to that voice of his,’ the author writes.

The alcoholic Burton fell ‘madly and powerfully in love’ with Elizabeth after meeting her in 1962. He became her fifth husband after tying the knot two years later – the first of their two marriages.

‘Her breasts were apocalyptic. Her body a miracle of construction and the work of an engineer of genius,’ Burton swooned.

But his dark moods from drinking eclipsed their decadent and extravagant lifestyle that funded an enormous entourage of helpers and gofers.

They traveled with no fewer than 25 suitcases of her clothing, expensive jewelry.

‘Their personal life was for public consumption which is what created the lucrative ‘Liz and Dick Show’ and would ultimately lead to its destruction,’ writes the author.

But their stormy relationship lasted through a 15-year roller coaster ride of drugs, booze, sex.

‘Alcoholism had become the third partner in their marriage,’ writes Brower.

‘Prescription pain meds became her poison of preference,’ according to her son, Chris Wilding, one of her three biological and one adopted child, from seven husbands. 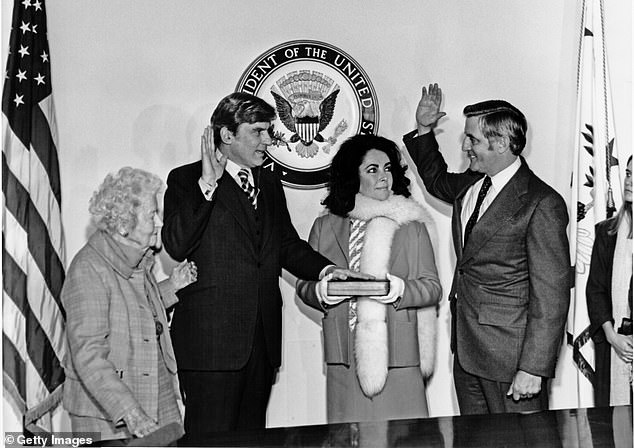 Warner often ordered his glamorous wife to pour another Jack Daniels and lose herself in TV binge watching during their marriage, according to the book 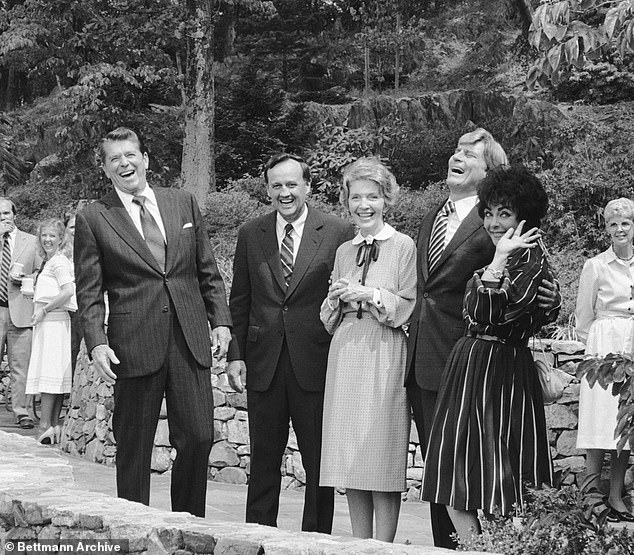 During this time, Taylor became a prominent figure in Washington’s social scene. She is pictured alongside Warner as they pose with then-presidential candidate Ronald Reagan and his wife Nancy Reagan 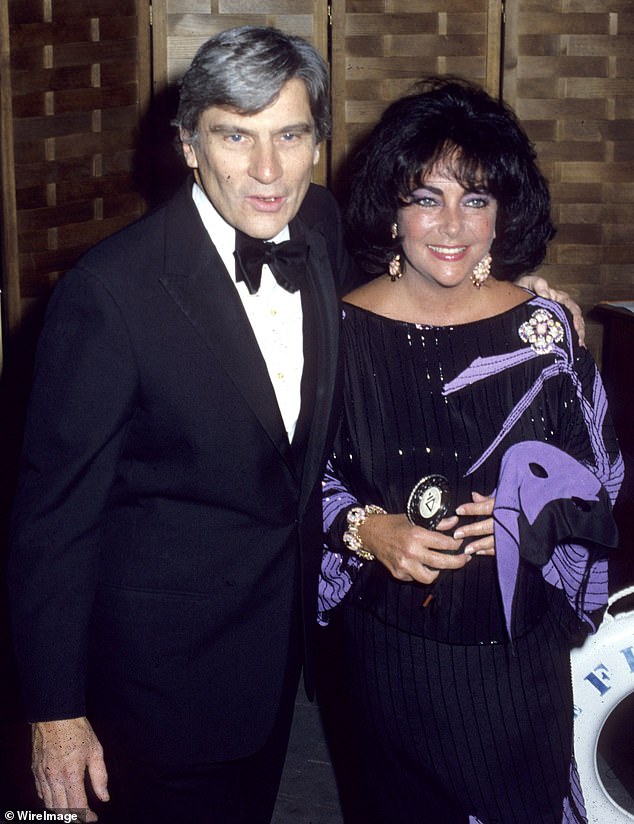 By 1990, three of Elizabeth’s doctors were accused of overprescribing addictive drugs – having written a combined 1,000 prescriptions for 28 different drugs between 1983 and 1988, according to the book.

Tranquilizers, sleeping pills and painkillers were washed down with Jack Daniels, champagne and vodka, Brower writes.

Burton eventually grew tired of Elizabeth’s many illnesses, the entourage they carried around the world, and her motto, ‘More is more’.

Hot for sex at 18, Elizabeth married her first husband, wild Hilton hotel chain scion, Conrad Hilton, but not before her mother bizarrely set up an operation to open her daughter’s hymen to ensure painless intercourse.

In May 1959, Elizabeth got her first diamond, a four-carat ring from Hilton.

The couple had simple tastes, like sharing a love for hamburgers smothered in onions.

They honeymooned in Europe but the thrill was gone within just two weeks, when Hilton virtually abandoned her and went on a drink and gambling binge.

He soon became abusive and kicked her in the stomach causing a miscarriage. 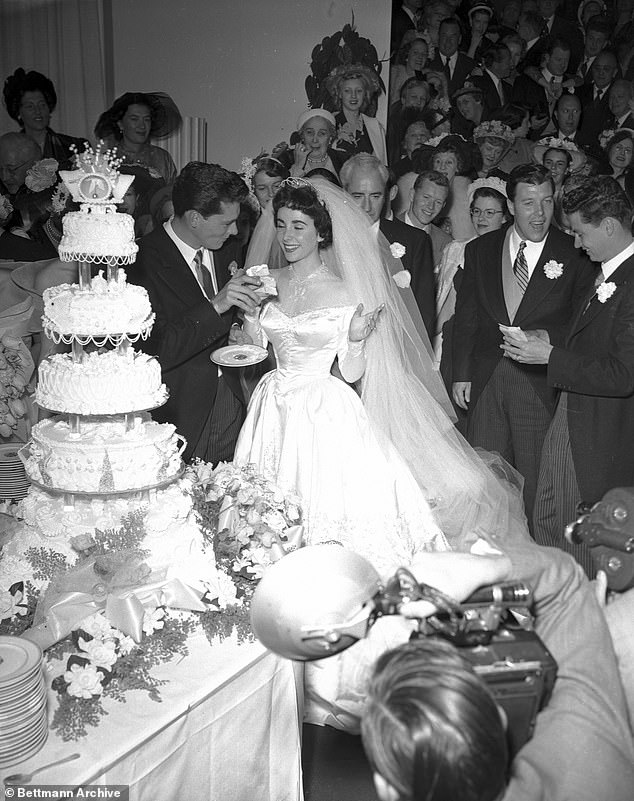 At just the tender age of 18, Elizabeth married her first husband, Conrad Nicholas Hilton, Jr., the great-uncle of Paris Hilton, at the Bel Air country club in 1950 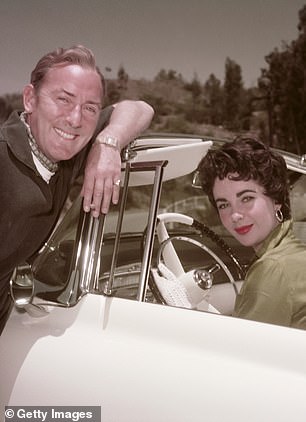 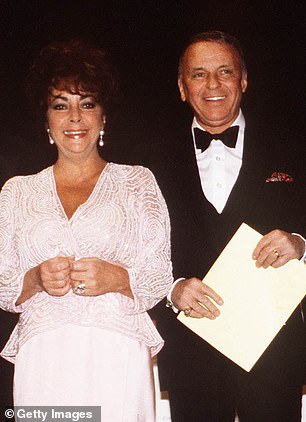 Taylor went on to marry second husband, British actor Michael Wilding in 1952, who was 20 years her senior. The biography reveals she had an affair with Frank Sinatra that resulted in a pregnancy that she later terminated 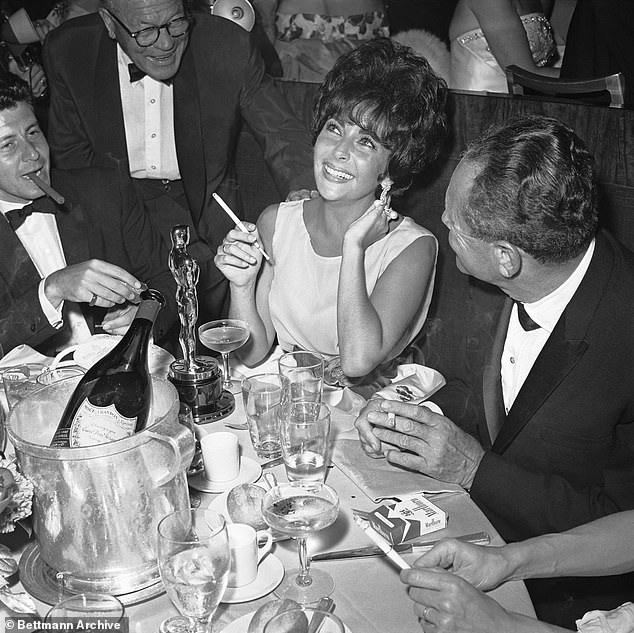 She learned she was pregnant when, ‘I saw the baby in the toilet’. The union lasted just eight months.

In 1952, Taylor married the British actor Michael Wilding, who was 20 years her senior.

Because of the age difference the couple had little in common, so little that, according to the author, Taylor had an affair with Frank Sinatra, and got pregnant.

She wanted to marry ol’ blue eyes, but his manager nixed the idea, and drove her to Mexico for an abortion.

She could not turn down the 29.4 carat emerald cut diamond she called her ‘ice skating ring’ that film producer Mike Todd offered in asking for her hand in marriage. They often had a slugfest followed by wild sex.

Beyond the big ring, the producer of the Academy Award winning film Around the World in 80 Days, gave her more jewelry – including an antique diamond tiara that she wore in their swimming pool.

Many of the jewels from him she stored away in a brown paper bag, according to the author.

But 13 months after their March 1958 marriage, Todd was killed in a plane crash.

Taylor was devastated and began popping sleeping pills, a habit that would continue throughout her life.

Fisher had been Todd’s close friend and offered comfort – sexual and otherwise – to Elizabeth after Todd’s death.

The union was a bad move on Elizabeth’s part because the public adored bright-eyed, girl-next-door type Reynolds. 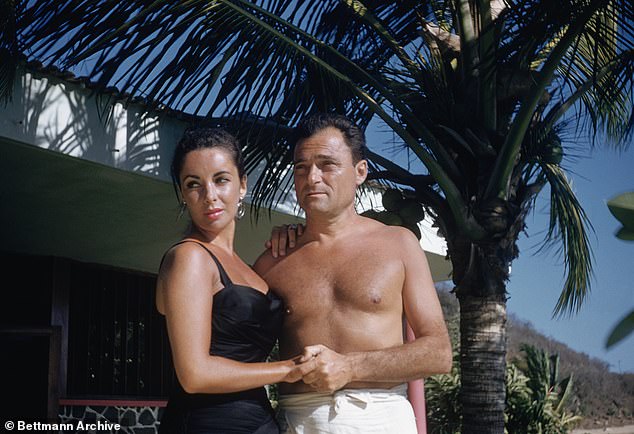 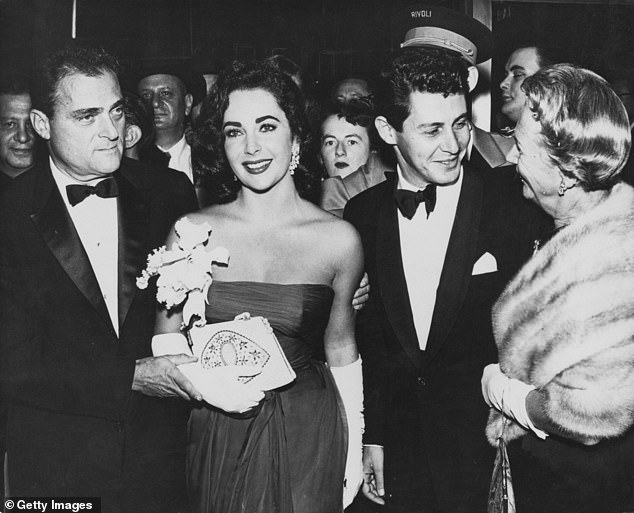 As the other woman, Elizabeth became ‘radioactive socially,’ Brower wrote.

Moreover, Fisher had major gambling debts and Elizabeth had to sell her big diamond to pay their bills.

At one point in the marriage, Liz came down with a serious case of acute pneumonia and required a tracheotomy to breathe.

‘I was never afraid of death again,’ she said, according to the author. After five years of a turbulent union, she called it quits with Fisher.

Elizabeth had become famous at age 12 after playing the lead in the film, National Velvet in 1944, but she felt abused with the MGM studio system that addicted their young stars to pills – amphetamines and sedatives.

Elizabeth vowed she would not end up like Judy Garland, an obsessive pill-popper, but, in fact, she would.

In all, Taylor made over 60 films, most for the silver screen and some for television.

During the AIDS epidemic in the 80s, she was one of the creators of amFAR, the foundation for AIDS research and devoted countless hours and money to the cause.

‘Beneath the psychic clutter of her own mythology was a bawdy woman quick to laughter and self-deprecation,’ writes Brower. 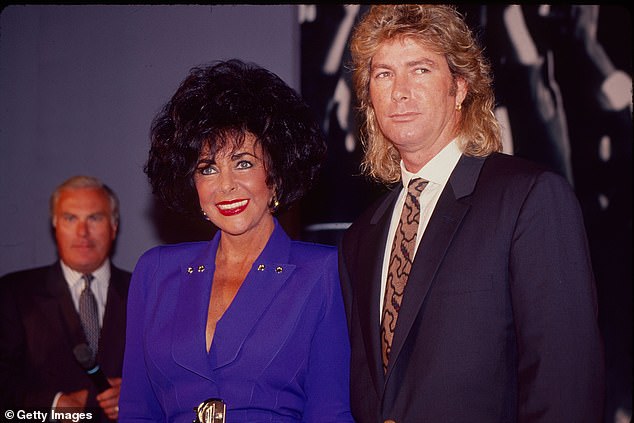 Elizabeth tied the knot one last time in 1991, with construction worker Larry Fortensky. The two split five years later. She remained divorced and unmarried until her death in 2011

‘Her life was a soap opera that ended in a deeply meaningful way – as the first major star to use her fame to change the course of history through her international HIV and AIDS activism.’

Several times she came back from the dead from illnesses and suicide attempts and overdoses, heart attacks, three hip replacements, and more.

‘I’ve been through it all, baby. I’m Mother Courage. I’ll be dragging a sable coast behind me into old age,’ she said, according to the author.

She left behind the most valued private jewelry collection in the world – along with 72 wigs.

The film critic Brendan Gill remembered Elizabeth as ‘a great natural wonder, like Niagara or the Alps.’