A Pakistani Muslim professor shot and killed another professor from the Ahmadi minority in the northwestern city of Peshawar, Pakistan on Monday.

Police said the shooting happened a day after the two allegedly had a heated discussion over a religious matter.

The attacker, identified as Professor Farooq Maad, and another gunman opened fire on the car of Professor Naeem Khattak as he was driving to his college, according to police official Siraj Ahmad. 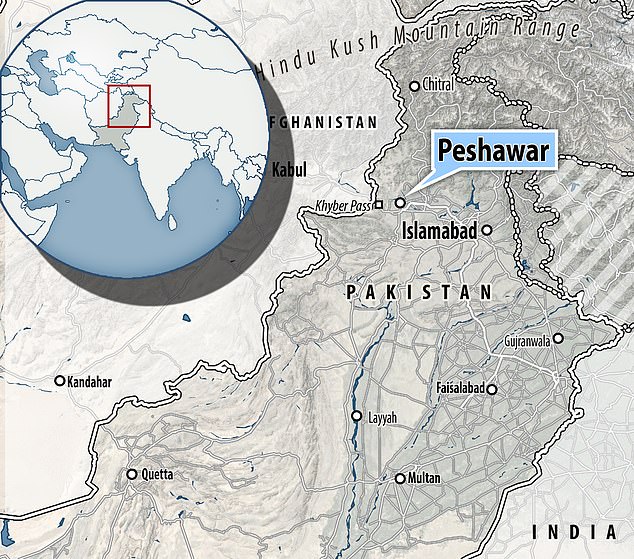 A Muslim professor shot and killed a fellow professor from the minority Ahmadi faith in the northwestern city of Peshawar, Pakistan (pictured) on Monday – the day after the two had a verbal brawl over religious issues

Professor Khattak belonged to the minority Ahmadi faith, which was established in the Indian subcontinent in the 19th century by Mirza Ghulam Ahmad, whose followers believe was a prophet.

Police said Khattak was killed by a fellow professor and another man a day after they had a verbal brawl over religious issues.

The victim and the attacker worked at different colleges.

Saleem Uddin, a spokesman for Pakistan’s Ahmadi community, said Khattak had completed his doctorate in Zoology and was facing problems because of his faith.

In a statement, he said Khattak had received threats and he demanded protection for people belonging to their community.

‘The government has failed in providing protection to Ahmadis,’ he said.

Without directly naming the military, he urged state institutions to ensure the protection of Ahmadis.

Pakistan’s Parliament declared Ahmadis non-Muslims in 1974, and they have repeatedly been targeted by Islamic extremists, drawing condemnation from domestic and international human right groups.

Homes and places of worship of Ahmadis have been attacked by Sunni militants who consider them heretics.

Peshawar is the provincial capital of Khyber Pakhtunkhwa Province bordering Afghanistan and it has a strong presence of majority Sunni Muslims and extremists.

Attacks on the country’s minorities, including Christians and Hindus, have increased since 2018, when the government of Prime Minister Imran Khan came into power, although Khan has repeatedly promised to safeguard their basic rights.