Hundreds more officers have been deployed to the NSW-Victoria border as police warn stricter enforcement and less discretion will be used to stop unauthorised people entering the state.

Anyone entering Victoria without the proper permit faces fines of $4957. 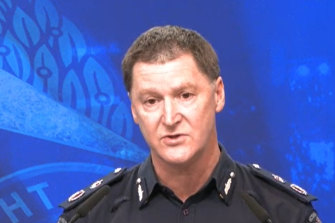 Police helicopters are also going to be used this week.

Mr Patton said they had opted for a mobile model over a “ring of steel” option, which police have found to be more effective and less disruptive for border communities.

“We saw that with the fixed model, while effective, there was a lot of down time, especially during wet weather, as well as excessive delays, hindering emergency workers as well,” he said.

“Those delays to community, was something that we considered as well. We saw with analysis that for every 1000 vehicles that were checked, when we had a fixed model, that’s six or seven fixed sites that we had around Melbourne, we detected 1.4 offences against the Chief Health Officer directions. So then we had our mobile enforcement model, that mobile enforcement model gave us greater coverage. It gave us agility, it gave us flexibility but most importantly, it gave us unpredictability.

“When we had that mobile model, that high visibility enforcement model, the analysis that we did on that for every 1000 vehicles checked we detected 48 offences against the Chief Health Officer’s directions.”

He said that the message from police was clear, warning travellers that less discretion will be used in coming days.

Our Breaking News Alert will notify you of significant breaking news when it happens. Get it here.