As politicians spar over who's to blame for recent increases in gas prices, a large majority of Americans say oil companies and Russian President Vladimir Putin are major culprits, a new ABC News/Ipsos poll finds.

Along party lines, Americans are more likely to blame Democrats for the increase in gas prices than Republicans, according to the poll, which also found much greater enthusiasm about voting in this November's elections among Republicans than among Democrats.

In the ABC News/Ipsos poll, which was conducted by Ipsos in partnership with ABC News using Ipsos' KnowledgePanel, more than two-thirds of Americans blamed Putin (71%) and oil companies (68%) a "great deal" or a "good amount" for the increases in gas prices.

This comes the same week oil company executives were grilled by lawmakers about the skyrocketing gas prices, which have been declining in recent days. 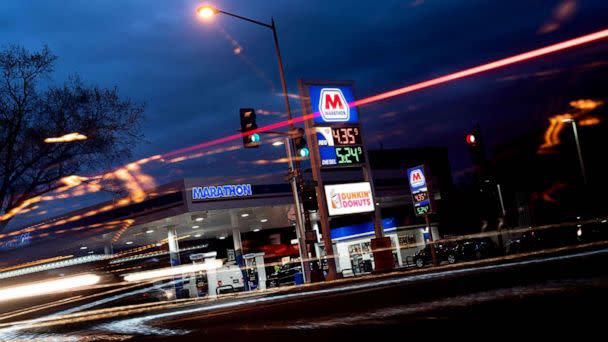 Oil executives took turns defending their companies during Wednesday's hearing with the House Energy and Commerce Subcommittee on Oversight and Investigations, pushing back on accusations of price gouging and citing the COVID-19 pandemic as a reason for cost increases.

Democrats have pointed to Russia's invasion of Ukraine as the source of the rise in gas prices, with President Joe Biden coining it "Putin's price hike," while Republicans have argued that Biden's energy policies are to blame.

Although the public appears open to Democratic arguments, they are more likely to place a "great deal" or a "good amount" of blame for the price increases on Democratic party policies (52%) and Biden (51%) than on Republican party policies (33%) and former President Donald Trump (24%). A strong majority of Americans (68%) also disapproves of the way Biden is handling gas prices. Not surprisingly, these assessments divide along party lines, with almost all Republicans (93%) disapproving compared to 41% of Democrats.

The public is split, with about half (49%) saying the price increases have caused financial hardship for themselves or others in their household, while 50% say it has not. Only 21% of Americans say it is causing them serious financial hardship. Republicans (60%) are more likely to say they're facing financial hardship over rising gas prices than Democrats (32%).

Pain at the pump is considered to be one of several big political challenges facing Democrats this year. With the elections seven months away, just under 2 in 3 Americans (63%) are very (39%) or somewhat (24%) enthusiastic about voting.

The poll found greater enthusiasm among Republicans, with 55% saying they are "very enthusiastic" about voting compared to only 35% of Democrats — setting the stage for a challenging election year for Democrats, who will need to increase the intensity on their side of the aisle. On the opposite end, more Democrats (13%) say they are "not enthusiastic at all" about voting in the November elections compared to Republicans (5%). 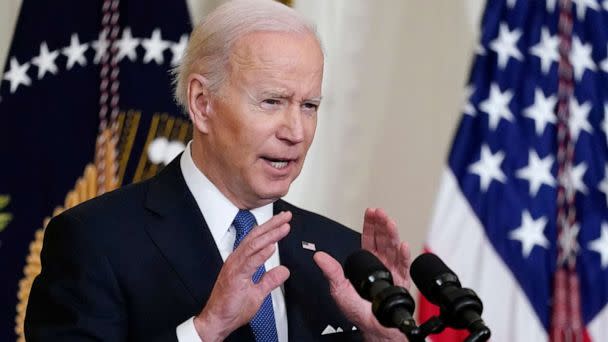 The ABC News/Ipsos poll did find broad support for Biden's policies regarding Ukraine, including placing tighter economic sanctions on Russia (79%), accepting refugees from Ukraine into the U.S. (63%), sending additional U.S. weapons and equipment to Ukraine (70%) and sending additional U.S. troops to nearby European countries but not Ukraine (53%).

Americans were less supportive of more aggressive options that Biden has said the U.S. won't pursue, including sending troops to Ukraine (17%) and imposing a no-fly zone over Ukraine (27%), which could mean direct military conflict with Russia.

Despite being in lockstep with White House policies, slightly more than half (53%) of Americans disapprove of the way Biden is handling the situation with Russia and Ukraine, with a great disparity in disapproval between Republicans (85%) and Democrats (28%).

Responses on a range of other issues, including the economic recovery, crime, climate change, inflation and immigration, have remained largely unchanged since the beginning of the year, with a majority of Americans disapproving of Biden's handling of them.

One bright spot continues to be the president's response to the COVID-19 pandemic, with 58% of Americans approving — up from 50% in late January. COVID-19 cases in the U.S. have plateaued, while hospitalizations and deaths have largely trended downward. Cases have started to tick up across the Northeast and the West Coast, with the Washington elite facing a COVID-19 outbreak in recent days.

This ABC News/Ipsos poll was conducted using Ipsos Public Affairs' KnowledgePanel® April 8-9, 2022, in English and Spanish, among a random national sample of 530 adults. Results have a margin of sampling error of 4.9 points, including the design effect. Partisan divisions are 27-26-40%, Democrats-Republicans-independents. See the poll's topline results and details on the methodology here.