This is the heart-stopping moment a reckless Seat driver overtakes on a zebra crossing and almost hits a five-year-old girl before her stepfather jumps in front of the car to save her.

Dash-cam footage shows a driver almost crashing into Jason Payne, 34, and his family as they use the crossing in Birmingham yesterday evening.

The family are seen walking across the road on Green Lane before the stepfather is forced to jump in front of the car to prevent it hitting Gracie.

The video shows traffic waiting on either side of the crossing, but a white Seat can be seen poking out from behind the first car in the queue. 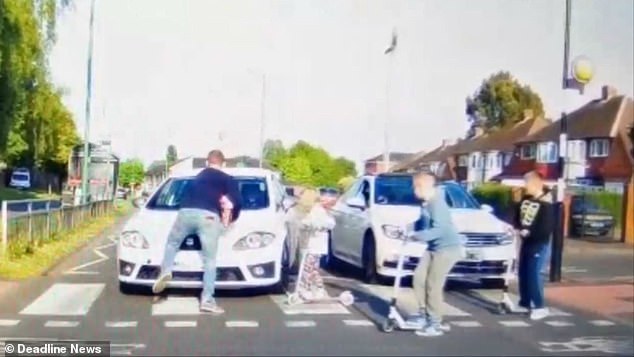 Jason Payne, left, 34, can be seen throwing himself in front of a white Seat that was moments away from hitting his stepdaughter, five, at a zebra crossing in Birmingham yesterday 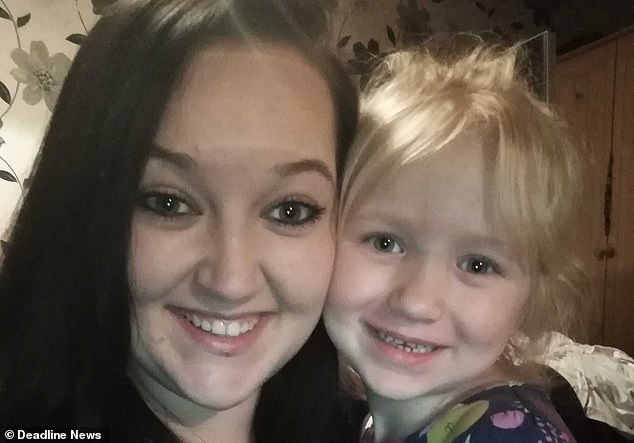 Mother Elizabeth Mears pictured with her five-year-old daughter, Gracie. Elizabeth said: ‘My little girl was shaken up but was soon scooting back home’

As the family make their way across, the Seat zooms forward directly into the path of Jason and Gracie, who hops onto her scooter and rolls further towards the vehicle.

As the car shows no signs of slowing down, Jason throws himself towards the bonnet and slams his hand on the windshield.

Gracie jumps backwards while Jason criticises the driver for his actions.

Another clip from a different angle shows how perilously close Gracie came to the front of the car, which slams on its breaks just in time to avoid the child.

The shocking scene has caused outrage on social media after Gracie’s mother Elizabeth Mears decided to share the footage in the hopes of catching the driver.

She posted the clips captioned: ‘My partner continues to bang on his bonnet to tell him to stop, but he continues to drive on apologising as he does so. 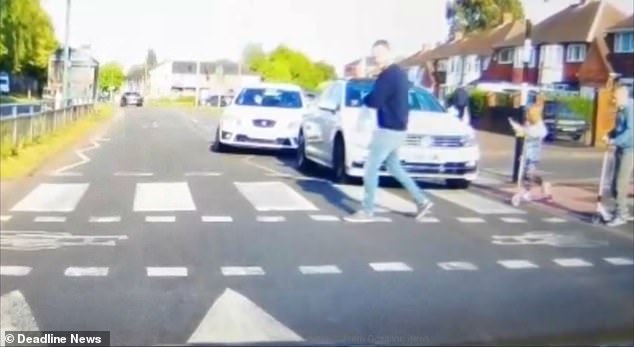 The family seen crossing the road towards at the start of the clip, with the white Seat poking out from behind the first car in the queue as traffic waits on either side 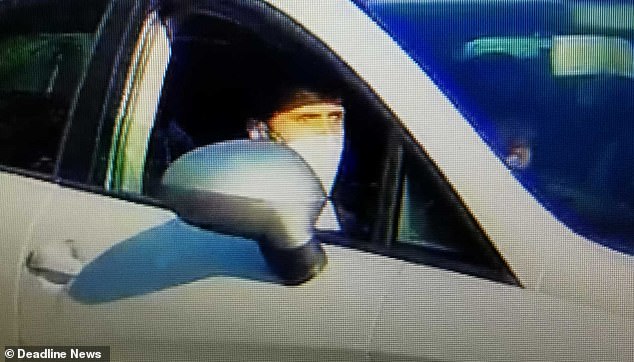 The driver pictured wearing a face mask. Elizabeth said the driver apologised and ‘looked in the back of his car and said something about a chase’ 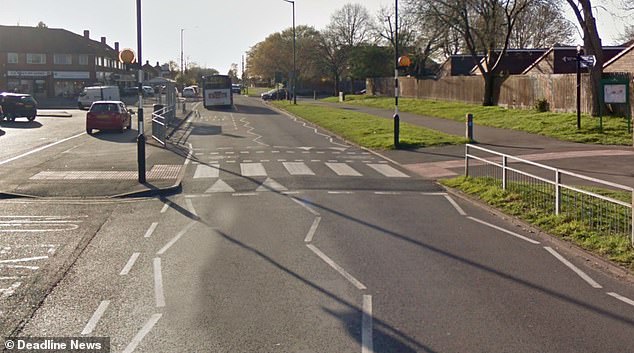 The crossing on Green Lane in Birmingham. The shocking scene has caused outrage on social media after the dash-cam footage was posted online

‘I have reported this to the police and it is being dealt with but please if anyone has any more information or knows this low life scum then please inbox me.

‘Nobody was hurt but we were all shaken up! Also thank you so much to the witnesses who gave us their dash-cam footage and helped calm us all down.’ 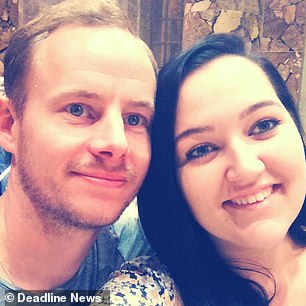 Elizabeth pictured with her partner and Gracie’s stepfather, Jason

One social media user replied: ‘That could have been devastating.

‘Thank god for the driver who got this on their cam and got the reg. Hope they get caught. So many dangerous drivers of late.

Another wrote: ‘Hope everyone is okay.’

Speaking today, Elizabeth said: ‘We are all good now. My little girl was shaken up but was soon scooting back home, but she won’t forget it easily.

‘She’s suspected to be autistic, so things like this she will ask about a lot.

‘The driver just said “sorry” and looked in the back of his car and said something about a chase.’

A spokesperson for West Midlands Police said: ‘We received a report of a car driving erratically and nearly hitting a woman and two children on a crossing along Green Lane, Castle Bromwich, around 6.30pm yesterday.

‘We’ve made an appointment to speak to the woman to obtain more details today, and anyone with information can contact us via Live Chat, or by calling 101. Quote log number 3732 of 4/5/20.’