The fourth and final man charged with helping to burn down a Minneapolis police precinct during the civil unrest last summer over the death of George Floyd has been sentenced to 27 months in prison and ordered to pay $12 million in restitution.

After he spends the two years and three months behind bars, Bryce Michael Williams, 27, of Staples, Minnesota, will serve another two years of supervised release, the U.S. Attorney’s Office for the District of Minnesota announced Monday.

Williams pleaded guilty to one count of conspiracy to commit arson in November.

Court documents allege that Williams went to the Third Precinct where a crowd of hundreds had gathered on the night of May 28, 2020. The crowd began shouting, “Burn it down, burn it down.” A fence that was designed to keep trespassers out of the building was torn down.

Williams and others then breached the fence and entered the Third Precinct.

Surveillance video footage showed Williams standing near the entrance of the building holding a Molotov cocktail while another “co-conspirator” identified as 25-year-old Davon De-Andre Turner lit the wick. Turner took the Molotov cocktail into the building where it was used to start a fire, prosecutors said. Williams later threw a box on an existing fire located just outside the Third Precinct entrance, prosecutors said. 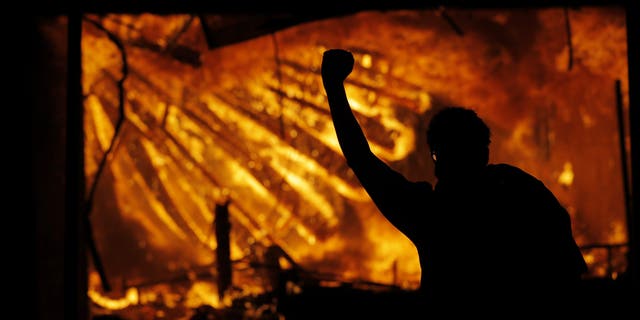 In this May 28, 2020 file photo, a protester gestures in front of the burning 3rd Precinct building of the Minneapolis Police Department in Minneapolis. (AP Photo/Julio Cortez File)

“All four defendants charged in federal court have now been sentenced for their individual roles in the burning and near total destruction of the Minneapolis Police Department’s Third Precinct building,” Acting U.S. Attorney W. Anders Folk said. “Mr. Williams and his co-defendants have been held accountable for their dangerous and destructive actions. I thank our federal, state, and local partners who pursued justice in these cases.”

In court Monday, Judge Patrick Schiltz described Williams as a “good person who made a terrible mistake,” in giving him a prison term lower than recommended by federal sentencing guidelines, the Minneapolis Star-Tribune. But the judge also asserted that Williams was a leader, “not a follower,” when a violent crowd stormed the police precinct last May, and therefore shot down his probation request.

Williams posted videos of himself and others during the riot to his TikTok account, which has since garnered more than 150,000 followers.

Also speaking in the courtroom was former Minneapolis police officer who did not give her name but detailed how the fire at the precinct and lasting riots has impacted law enforcement and others. She detailed how she would send photos of herself before and after each shift last summer to let her family know that she survived. She is among the nearly 300 officers who have since resigned from the Minneapolis Police Department in the wake of Floyd’s death, as many have cited post-traumatic stress from the civil unrest that followed.

“There’s so much we lost that was more than bricks and mortar,” the former officer said.

Schiltz outlined Williams, a father and former college basketball player, had stopped drinking and smoking marijuana and held steady jobs, including working in security, since his arrest last June. The judge agreed to recommend Williams be placed in a federal facility in Duluth to remain close to family. Williams has until July 13 to surrender himself to authorities.

The ATF, the FBI, the Minneapolis Police Department, and the Minnesota State Fire Marshal Division carried out the joint investigation into the incident.

All four people charged in connection to setting the police precinct fire have now been sentenced.

Court documents allege 23-year-old Wolfe pushed a barrel into a fire located in the entrance of the precinct in order to help accelerate the blaze. He also was accused of taking several items from the building, including a police vest, duty belt, handcuffs, baton, knife and ammunition. Prosecutors said he was arrested in June 2020 wearing those same stolen police vest, duty belt and carrying a tactical baton.

Robinson was accused of breaching the fence and entering the building before lighting the wick to an object held by another person, who then threw it with the intent to start a fire or fuel an existing fire.