The Minneapolis courthouse where ex-cop Derek Chauvin will stand trial for murder in the death of George Floyd is being turned into a veritable fortress.

Hennepin County District Court, where jury selection is due to begin March 8, is being ringed with concrete barriers, security fencing, and barbed wire — and a beefed-up security presence that will include the National Guard. 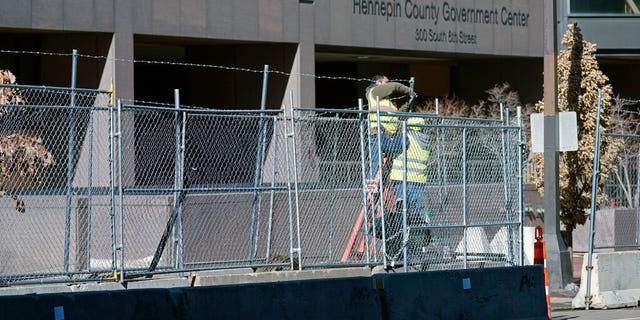 “There’s going to be very high emotion on all sides of this, and we’ll be prepared,” Minnesota Gov. Tim Walz said.

Walz and Minneapolis Mayor Jacob Frey came under fire in the wake of Floyd’s police-custody death on May 25, when they were unable to quell protesters who clashed with police, set fires, and looted parts of the city.

Chauvin is charged with killing Floyd by pressing his knee on Floyd’s neck for nearly nine minutes despite his repeated pleas that he couldn’t breathe.

Frey said as many as 3,000 law enforcement personnel could be deployed — including city, county and state police — before the case goes to a jury.

And it’s not just the courthouse that’s being prepared for any unrest — the city jail and nearby City Hall are also being reinforced with fencing, barbed wire and barriers.