A Millwall fan who was carried to safety by a Black Lives Matter protester is nursing a black eye – and would like to thank the man who rescued him, his son has said.

Bryn Male, 55, was lifted out of a crowd by Patrick Hutchinson on Saturday when protests near Waterloo station became violent.

Delivery driver Mr Male, who is an avid Millwall FC fan with a club tattoo on his leg, was one of several hundred demonstrators who made their way to central London last weekend with the stated aim of protecting historic statues.

His 21-year-old son Harry told The Sun Mr Male ‘got a black eye’ during the demonstrations.

When asked if his father wanted to thank Mr Hutchinson for carrying him to safety, Harry said: ‘He probably would. Who wouldn’t?’ 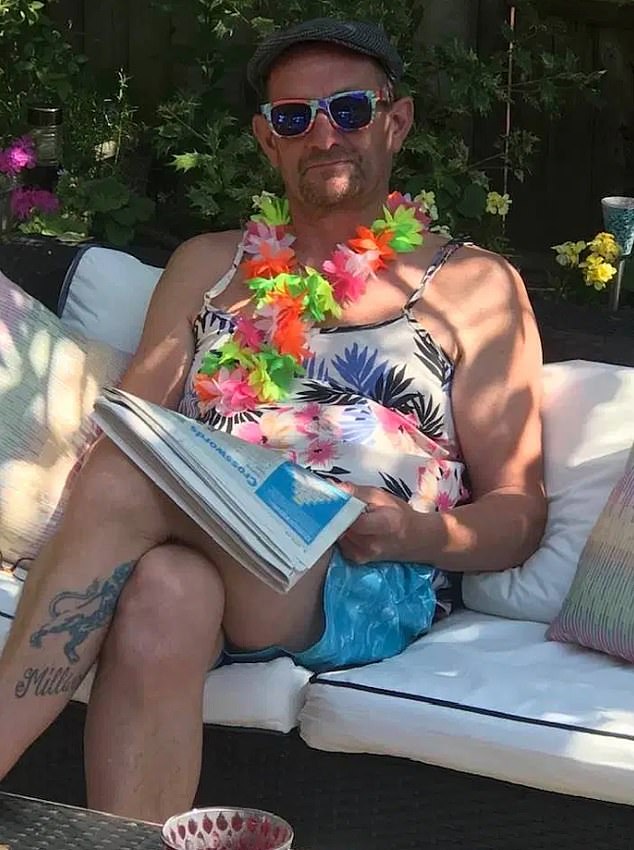 Delivery driver Mr Male, who is an avid Millwall FC fan with a club tattoo on his leg, was one of several hundred demonstrators who made their way to central London last weekend with the stated aim of protecting historic statues 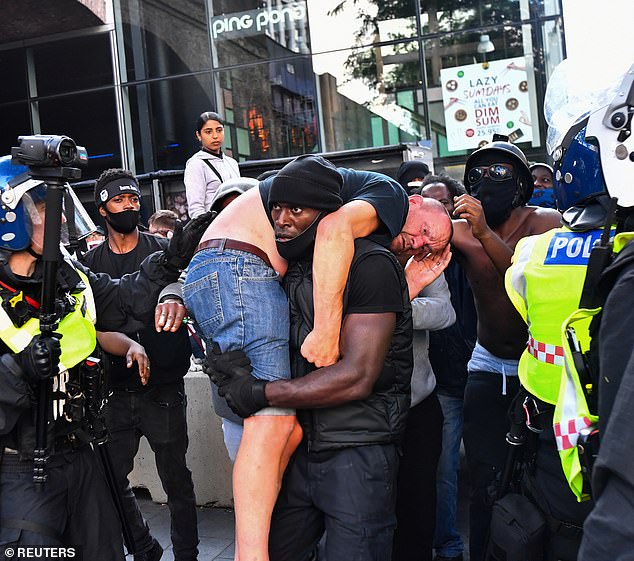 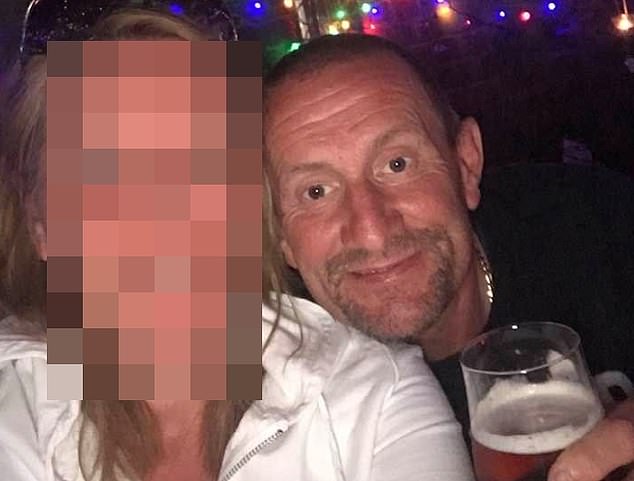 Grandfather Mr Hutchinson – who had been due to babysit on Saturday – said he feared Mr Male ‘would have probably ended up being killed’ amid the violence.

He had travelled to the capital to ‘keep the peace’ amid concerns that young anti-racism protesters could find themselves caught up in clashes.

Mr Male, who lives in Basingstoke, Hampshire with his wife, and his son Harry, is understood to have been attacked near Royal Festival Hall after he was separated from his friends. Reports now indicate he is recovering.

One source said Mr Male is a ‘fanatical Millwall fan’ who was ‘well-known in that crowd’.

He would regularly take the train to London for protest marches, the source said, adding: ‘I wasn’t surprised when I saw him on the news. 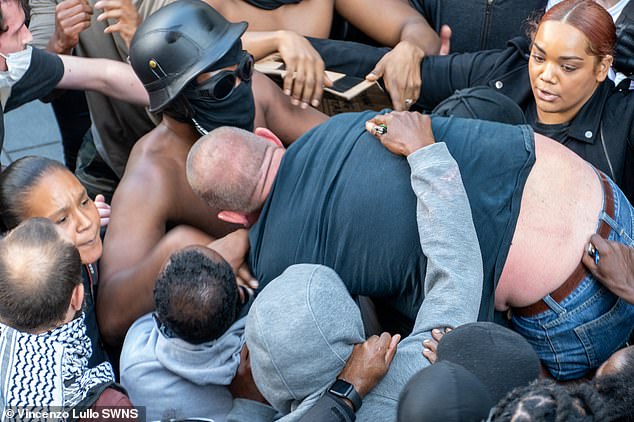 The source said that Mr Male should ‘learn’ from the incident, and he ‘needs to grow up’.

‘This should be a wake-up call. He’s in his 50s and I’m not sure why he’s getting involved in stuff like this.’

The source said Mr Hutchinson is a hero and ‘clearly a great guy’.

After an image of his rescue mission was shared across the country and described as an act of compassion in the face of hatred, Mr Hutchinson said: ‘You just do what you got to do.’

His relatives told how Mr Hutchinson, who ‘would not hurt a fly’, had said: ‘It’s not about black versus white, it’s everybody against racism’. 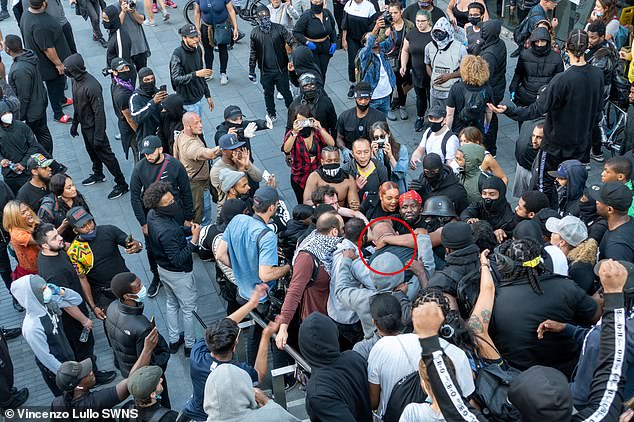 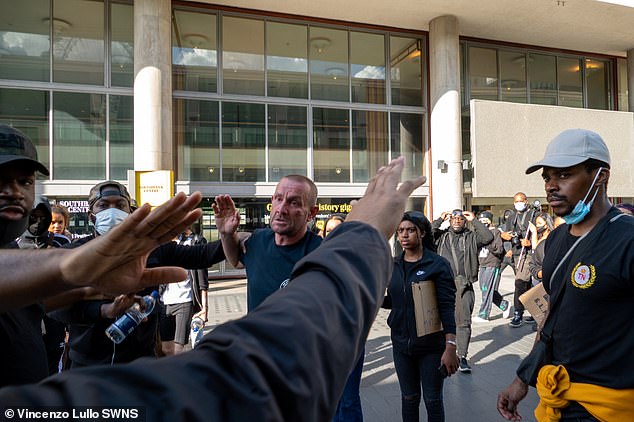 The man, whose ‘life was in danger’, can be seen raising his hand to demonstrators before getting dragged into the crowd where he was attacked

The incident emerged during a weekend of violence as hundreds of football hooligans and neo-Nazis sought to interrupt demonstrations.

Dozens of people were seen setting upon an unidentified white man on a set of steps near London’s South Bank amid a frenzied atmosphere.

Mr Hutchinson, who quit a career as an IT consultant several years ago to become a personal trainer, described acting out of instinct after seeing the man being kicked, believing his ‘life was under threat’.

Accompanied by a group of friends who had travelled to the event to stop violence, he waded through the crowd and picked up the injured man

Footage showed Mr Hutchinson, wearing gloves and face mask, with the man slumped over his shoulder as demonstrators tried to continue the assault.

He told Channel 4 News: ‘It was pretty hectic. It was almost like a stampede. I just thought, ”Well, if he stays here he is not going to make it.”

‘So I just went under, scooped him up, put him on my shoulders and started marching towards the police, whilst all the guys were surrounding me and protecting me and the guy.’ 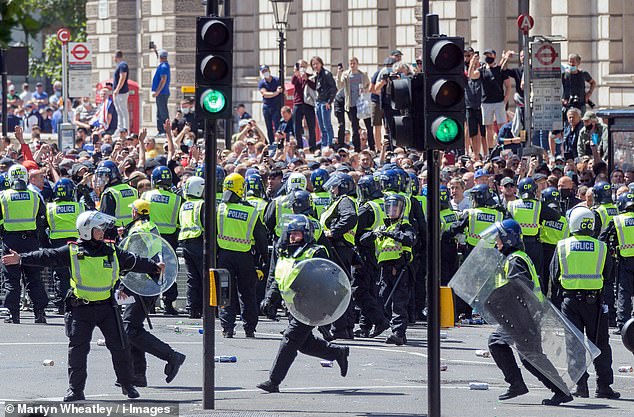 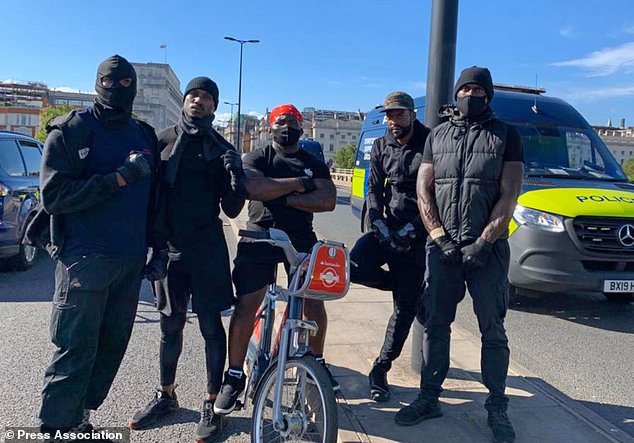 Tensions had erupted when large groups of anti-racism demonstrators began to hunt members of far-Right groups. Dozens of people were seen setting upon a white man on a set of steps near London’s South Bank amid a frenzied atmosphere.

Mr Hutchinson reflected on the death of George Floyd at the hands of US police in Minneapolis last month, which inspired the anti-racism protests across America and Britain

He said: ‘If the other three police officers had thought about intervening and stopping their colleague from doing what he was doing like what we did, George Floyd would still be alive today.’

Mr Hutchinson, who has a total of three daughters and supports the Black Lives Matter movement, said: ‘I just want equality – equality for all of us.

‘At the moment the scales are unfairly balanced and I want things to be fair, for my children and my grandchildren.’ 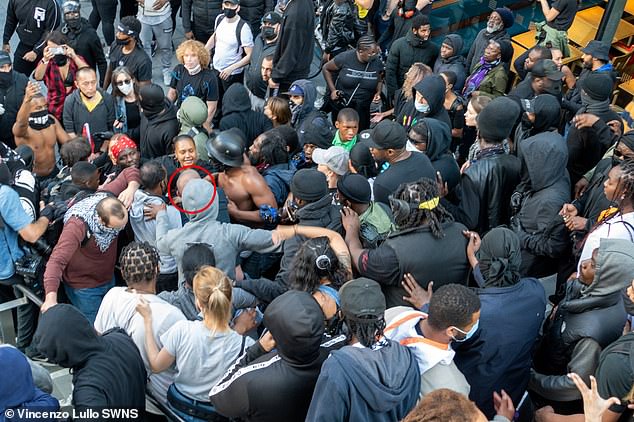 Mr Male was dragged into a huge crowd during the clashes on Saturday. He can be seen (circled) shortly before he was pulled out of the group

His younger brother Don told the Daily Mail: ‘My brother is a big guy but even though he has the capability to hurt people, he wouldn’t hurt a fly.

He added: ‘His first thought was that someone was in danger. He didn’t think, ‘Oh, this is a black guy or white guy.’ He thought someone could die and I have to get involved.

‘He wouldn’t stand there and see someone kicked to death. Patrick just took it all in his stride. All he said is, ‘It’s not black versus white, it’s everybody against racism’.’

Don said he hoped his brother’s actions could help the country to heal, adding: ‘It is time that we all set our differences aside and learn to work together.’

He said he was relieved his brother was not mistaken as a ‘protagonist’ by police.

Labour MP David Lammy said: ‘It’s easy to focus on the worst instincts of human behaviour. But it is vital we also celebrate the best.’