Ask anyone who knows her in the entertainment industry and they’ll tell you: Jennifer Lopez is the queen of the romantic-comedy genre.

Sure, she's also a global music sensation, dancer and mom to two children. But on screen, she shines in leading roles where viewers can't look away from her characters' journeys to finding love.

Milo Ventimiglia, who played her husband in the 2018 film “Second Act,” told NBC News, “She’s larger than life but somehow the most relatable person in the world on the big screen.”

Tyler Posey, who played her son in “Maid in Manhattan,” one of her most famous rom-coms, said she “just has a vulnerability that makes a rom-com, a rom-com. People see that and recognize it and instantly fall in love with her.”

And Kat Coiro, director of Lopez’s latest rom-com, “Marry Me,” described her as the “perfect” candidate for the lead.

In it, Lopez plays Kat Valdez, a Latin pop superstar who, in a moment of inspired insanity, marries a random audience member named Charlie Gilbert (Owen Wilson) during a concert performance after learning about the infidelity of her fiancé, Bastian (Maluma).

“Jennifer was the only one who can do this,” producer Elaine Goldsmith-Thomas said. “You have to have somebody with that charisma and that stage presence.”

As the film unfolds, Kat and Charlie get to know each other as unlikely newlyweds, attempt to bridge the gap between their very different worlds and, of course, find true love.

The rom-com was never about "anything other than making a timeless film that speaks to hope and escapism and love, as well as relevant subjects like social media and fame and loneliness," Coiro said. "It's also an event. It's a concert experience."

Lopez was just the leading lady to make the film feel like an event.

J. Lo didn't begin her career as an actor, let alone a leading one in a romantic comedy.

She started as a backup dancer for big names like New Kids on the Block and Janet Jackson, before appearing in a handful of TV shows and movies. She later landed her first breakout role as Selena in the 1997 biopic of the same name — a performance that garnered unanimous praise and catapulted her into the national spotlight. Then, in 1999, she released her debut album, "On the 6," cementing Lopez as a triple threat in Hollywood.

By the late '90s, despite becoming a household name after the release of "Selena" and her music, Lopez had yet to land a lead role in a romantic comedy — the only goal she had at the beginning of her Hollywood career.

"When I first started, one of the things that I wanted to do, because I was Puerto Rican, Latina, was that I wanted to be in romantic comedies," Lopez, who was not available for an interview, said in a Hollywood Reporter roundtable discussion in November 2019.

She continued: "I felt like all the women in romantic comedies always looked the same way, they were always white. And I was like, if I can do it and just show that I’m every girl — because I am the hopeless romantic, I am that — I am the single working woman, I was those things."

"I remember thinking, I need to be the lead in a romantic comedy," she added.

Her dreams came to fruition when she snagged the lead in the 2001 film "The Wedding Planner," co-starring Matthew McConaughey.

"The first thing I love about J. Lo is that she always wanted to make rom-coms, and she had to push her way to get in," said Scott Meslow, the author of "From Hollywood With Love: The Rise and Fall (and Rise Again) of the Romantic Comedy," a book that explores the beloved genre during its "golden era" in the 1990s and early 2000s.

"She has a genuine passion for rom-coms, and 'The Wedding Planner' was her first, a role that many actresses turned down. But she came in, and it became this huge hit," Meslow said.

"I knew J. Lo as a leading woman in a rom-com before I even knew her as a dancer or singer," Kaitlin Gu, 27, said.

Growing up, Gu, who is Asian American, said seeing someone like Lopez in her favorite movie genre was particularly important.

"She was one of the only nonwhite actors who were in these major blockbuster romantic comedies, and that was so powerful to see as a child," Gu, who is a software engineer, said. "Like, I am a hopeless romantic, too!"

Meslow agreed, adding that there is a "groundedness" and universality to her performances "that speaks to the everyday woman and really any person looking for love."

“She’s really in a class of her own,” Meslow said.

Many on Twitter have already sung her praises or expressed excitement about her return to the big screen.

"“im free on feb 14” well im not. im going to watch marry me a romcom starring jlo and owen wilson," one user wrote.

"another jlo romcom nature is healing," another user wrote.

Any worries about J. Lo and her place in Hollywood were quickly assuaged after the box office success of "The Wedding Planner," which grossed about $95 million against a $35 million budget.

Over the past two decades, Lopez starred in other rom-coms, including "Gigli" and "Jersey Girl" with her then- (and now-) partner, Ben Affleck; the 2005 film "Monster-in-Law" opposite star Michael Vartan; and the 2010 movie "The Back-Up Plan" with actor Alex O'Loughlin.

Along with "Marry Me," Lopez will be the leading woman in another rom-com later this year: "Shotgun Wedding" with actor Josh Duhamel.

"It's really striking that her enthusiasm for rom-coms has never waned — and that really translates to her films," Meslow said. "She has this extraordinary ability to bring this warmth and openness to all of her performances."

"And to be that successful, magnetic and charismatic in front of the screen, both big and small — that is such a singular of a talent because that is hard to do when you're one of the biggest pop stars in the world," Meslow said.

According to her co-stars, Lopez acts just the same behind the camera, as well.

"The most encouraging thing about Jen was that she wants to make sure that these characters were believable and that people could see themselves in these characters," Ventimiglia said. "She believes in herself. She believes what she experiences on set." 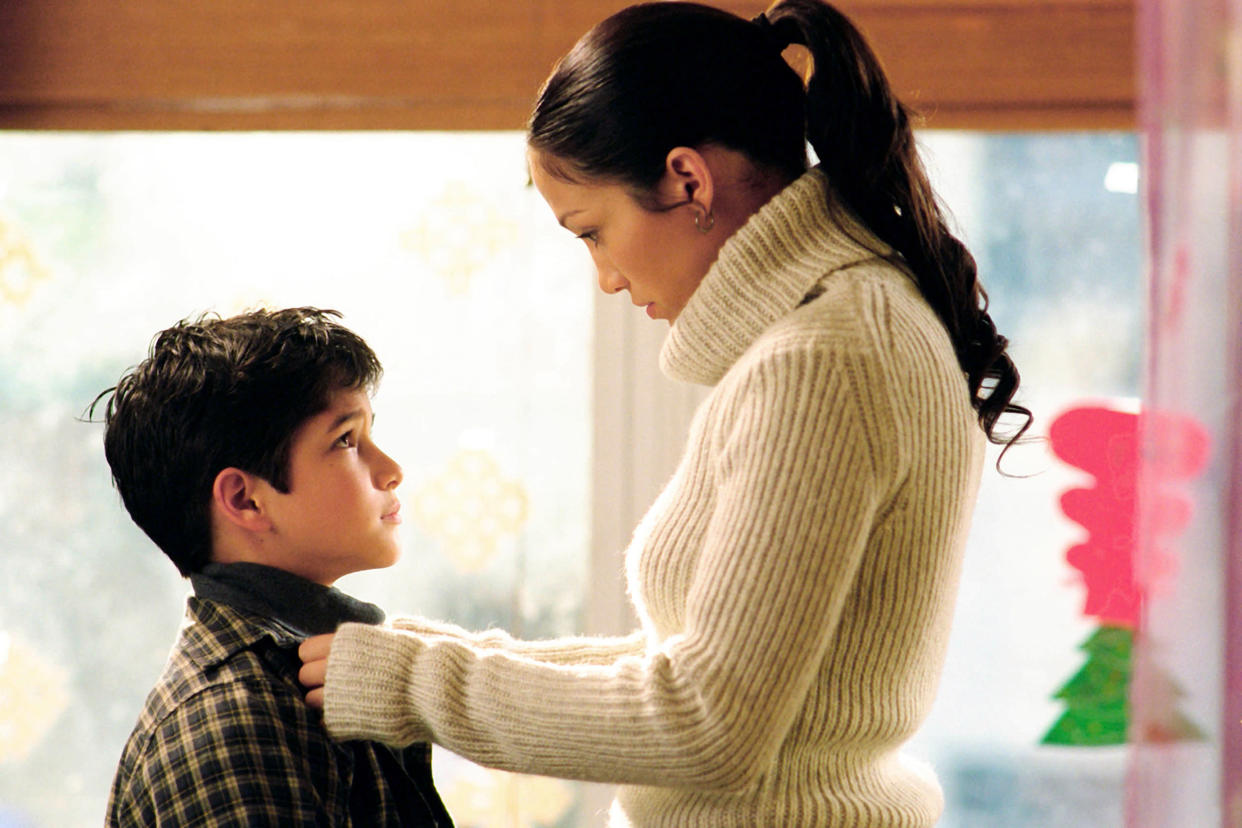 Posey, who was 10 when he started filming "Maid in Manhattan," said Lopez was a "freaking awesome" person who made him feel "super comfortable" as a child actor.

"She was never late to set. She was as nice to everyone in front of the camera as she was to people behind the camera, and she always made time for me," he said.

Posey added that at one point during filming, Lopez even gifted him an Xbox.

When asked if they would see "Marry Me," her fans and former co-workers all had the same answer: a resounding yes.

Ventimiglia revealed that Lopez even shared the script with him, and he said it was "wonderful."