The Marines of Lima Company, 3rd battalion, 25th Marines, took some of the heaviest casualties during the Iraq War. Of the 184 Marines who deployed together from this Ohio Reserve unit, 23 were killed in action, including 15 in one roadside bomb in Anbar province, the largest single loss of life in a roadside bombing during the war.

Those who survived the seven-month tour, including 37 who received Purple Hearts, had some of their hardest days after returning home. Their 2005 deployment on the Syrian border was to some of the war’s biggest ambush territory. They received three Silver and 11 Bronze Stars for valor. Back home, suicide became the enemy of this battle hardened unit who spent all but 10 days of their tour “outside the wire,” the safety of their base camp. 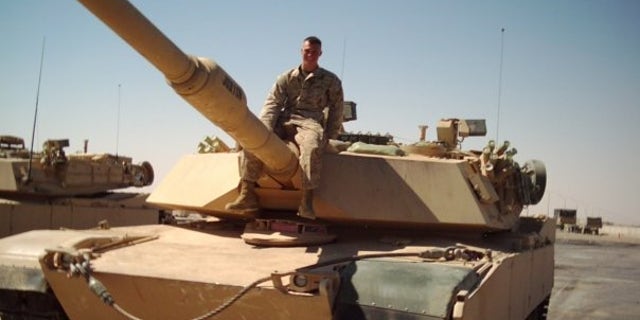 “You know, I personally took sniper fire, machine gun fire, RPG fire bounces just feet away from your head and it’s a dud and bounces around the rooftop with you, you know, thank the Lord. Direct impact, mortars just feet above your head,” Logue recalled.

On May 11, six Marines were killed in a deadly roadside bombing just days after two others were killed as Lima Company took a break from clearing houses. “You know, the very last house that one of our teams was clearing ended up being just a ‘kill house,’ it was concrete steel reinforced with a 50 cal machine gun under the concrete to basically be aimed up at the entryway so that when the Marines that were in there popped off their helmets,” Logue said.

It was a shooting gallery. The losses from that incident and so many others still haunt the unit, which is why their commanders reached out to The Independence Fund, which had partnered with the Department of Veterans Affairs to participate in a pilot program to prevent additional suicides among veterans. The idea was born at the funeral for Derek Hills (Bravo Company, 2-508) from the 82nd Airborne in 2018. “Someone said, ’see you at the next funeral’,” recalled Danica Thomas of The Independence Fund, whose husband, Allen, a combat vet from the same unit had died by suicide. “We said, no, there’s not going to be another one.” 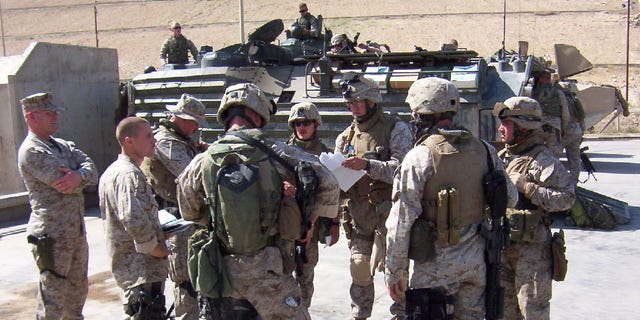 Lima Company preparing to head outside the wire in Iraq.

Sixty surviving members of Lima Company gathered in Nashville for a reunion weekend dubbed Operation Resiliency and organized by The Independence Fund from May 20-23. For some, it was the first time they had seen each other in 16 years. Last year, 571 service members died by suicide, up 13% from the year before. The VA estimates 17 veterans take their lives every day, an epidemic made worse during the isolation of the past year’s pandemic.

“You’re always vigilant. You’re always in that hyperactive. So, you know, as a 19-year-old combat veteran returned home to Lebanon, Ohio, you know, two weeks being home, in my mind, I just felt like I wasn’t home. I felt like I was home. I felt like there was unfinished business. We left brothers, you know, and blood on the sand in Iraq,” explained Logue, who attended the Operation Resiliency weekend. He is now married and has two children, living in Cincinnati. “Statistically speaking, the highest rate of suicide in the military is combat veteran males from 18 to 25.”

As the Marines from Lima Company checked into the Nashville hotel, some were given T-shirts that said “Not all Heroes Wear Capes.” They hugged. Some cried. The weekend began with storytelling.

Their Sgt Major Dan Altieri, told them, “It’s OK not to be OK.” Therapists from the VA broke the ice with talk therapy broken up by group physical therapy and a little axe throwing, for good measure.

“Sometimes they just lose their memories or they want to forget about things that they did and they thought it was maybe a negative part of their life. So you get back together with groups like this, rekindle, listen to other people’s stories and just know that the military made them who they are today or being a large part of who they are today. And I think that’s a positive experience for everyone,” Lima Company’s Brian Hamilton said.

They talked about some of the worst days of their deployment: like May 11, when Michael Logue was traveling in a convoy of Amphibious Assault Vehicles, which at that time were not armored and were being used by the Marines on land. “There’s nothing assault about it. It’s a big, large, soft target. It has an aluminum underbelly,” Logue explained. The Marines bolted armor to the sides for makeshift protection but that made the vehicles move slowly. “We’ve got 17 Marines packed into it, knees interlocked. Shoulder to shoulder. We’re sitting on about 50,000 rounds of ammunition.” His platoon sergeant ordered him to switch assault vehicles at the last moment, a decision that saved his life.

“I stand up on overwatch and we start rolling forward. And 30 seconds later, I see a Marine in the open. I see a fireball. And then I see I, you know, start to feel explode, you know, start to hear the explosion because you always kind of feel it and see things first and then then you actually hear it,” Logue told Fox News. “It was a pressure plate, IED with like hacksaw blades, and it shot the amount of explosives, had a piece of steel over top of it. So it creates a big shaped charge. And it just sliced right through the aluminum underbelly of this Amphibious Assault Vehicle hitting all the jet fuel, hitting all the 50,000 rounds of ammunition.” 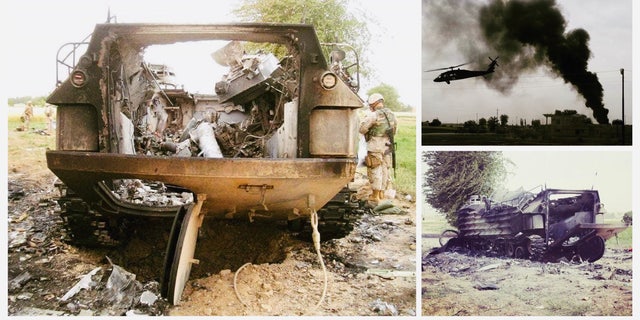 On May 11, 15 Marines were killed instantly by an IED.

One of his fellow Marines, Mike Strahle, was flung by the blast into an open field. He survived and has spent recent years traveling the country with a display of the boots and dog tags of Lima Company and telling their story in “Eyes of Freedom.”

They mounted the display in Nashville along with the photo and dog tag of Lance Corporal Nicholas B. Erdy – who was on the vehicle that blew up on May 11, 2005, shortly after Michael Logue was told to change vehicles.

“It’s the first time in 16 years I kind of mentioned this inside,” said Lima Company’s Jeff Valentine. “it almost felt like we were deployed again. It was fun. We’re all away from our normal homes. It’s just the guys. We’ve got to tell our stories freely and laugh and joke. And it was great. … The biggest thing for me was every stressor I have in my everyday life was gone for the last 72 hours. And I just it was like a reset. It felt great. I don’t know. I felt like I was 22 years old. It was fun.”

They did a service project: painting shelters for homeless vets.

They visited the Johnny Cash Museum, where Cash’s nephew played guitar and a bugler played the national anthem and taps for those who did not come home.

If you or someone you know is having thoughts of suicide, please contact the National Suicide Prevention Lifeline at 1-800-273-TALK (8255). Veterans can also reach out to the Veterans Suicide Hotline at 1-800-273-8255.