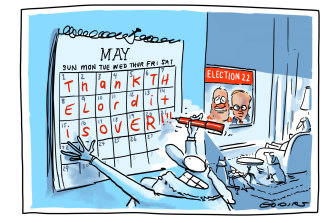 Bravo to “those brave souls” who take a leap of faith in themselves and change their careers later in life (“Mid-life change doesn’t have to be a crisis”, The Sunday Age, 15/5).

My husband, a chartered accountant for many years, retrained as a teacher when our children were young and I financially supported him. My turn came, after 20 years as a landscape architect, when he supported me to retrain to become a teacher in special education.

At the age of 46, I graduated with a diploma of education, added a master’s degree over the next few years and have been gainfully employed as a teacher over that time, most recently landing a position last year, which I love, at the age of 53.
Fran Jackson, Surrey Hills

How could this happen?
How could the Australian Electoral Commission not have realised that people who tested positive to COVID after May 13 at 6pm would not be able to vote in person on May 21?

The last-minute correction on the AEC website is likely to disenfranchise many unwell would-be voters. Incomprehensible.
Lucille Forbes, Brighton East

Denied my right to vote
My husband and I are in the UK for six weeks, so we applied for postal votes to be sent to our address in London before we left Melbourne.

I received a letter three weeks ago acknowledging my application but my husband received nothing. His postal vote has arrived but mine hasn’t. When I rang the Australian Embassy to see if I could come in and vote there I was told “Don’t worry. If you are overseas you are not required to vote”.

As someone who has spent many hours over the past few months volunteering for my local teal candidate I am very upset I am being denied my right to vote. How many others find themselves in this situation?
Sandra Bennett, Hawthorn East

Items of business
The unseemly mess of this election calls for a re-examination of the process. How much better for all involved if we moved to fixed four-year terms, with a fixed date as we have with Cup Day. Election mode should be no longer than four weeks.

Add in an independent body scrutinising for truth in electoral advertising and limitations on personal and business donations, whatever form they take. We need complete transparency around the interaction between lobbyists and politicians and a reform of the freedom of information process.

We must stop our slide towards the worst aspects of the American electoral process.
Peter Barry, Marysville

A win for flora and fauna
Labor’s announcement of an “independent national environmental watchdog” is a win for Australia’s unique flora and fauna which is unable to speak for itself (“Labor makes late pitch on environment”, The Age, 21/5).

In Victoria alone, the exemption of regional forest agreements from the national Environmental Protection and Biodiversity Conservation Act has allowed VicForests to breach environmental law all too frequently and the state’s Conservation Regulator has failed to prosecute.

If the incoming government can make the environment a top priority, with tangible results, the morale of many Australians, especially young Australians, will be lifted.
Ray Peck, Hawthorn, Hawthorn

Conspicuously absent
Among the various policies spruiked pre-election, two major issues at the forefront of many Australians’ minds – immigration and population – were notable by their blatant absence.

Although the Coalition budget papers indicated its desire to revert to pre-pandemic levels of immigration as quickly as possible, it made no public and formal electoral commitment on such an increase. Nor did Labor make any substantial announcements on these issues.

Such bipartisan recalcitrance speaks volumes about both parties’ lack of awareness of how the Australian electorate views these issues. Despite the usual arguments from certain vested interests, alleging the benefits of a “Big Australia”, the experience of many Australians of high immigration means a consequent exponential population explosion, generating continual detriment to already over-stretched resources, affordable housing, healthcare, employment, congested roads and crammed suburbs.

For many Australians, the competitive, pre-COVID battle to access these life basics is strongly and negatively etched in their consciousness.

It appears both major parties realise immigration and population growth are fraught areas and it is better to remain silent – at least until ensconced in power.
Deborah Morrison, Malvern East

Democracy is the winner
Whichever side wins this tightly fought election, democracy and the democratic process will be the real winners.

That we can conduct elections like this in Australia where the only violence is a graffitied poster or two is something to be proud of. It is a credit to everyone involved that voting at polling booths is undertaken in such a civil and respectful manner.

Would that those we duly elect behaved in the same civil and respectful way when they get to Canberra.
Nick Toovey, Beaumaris

It hasn’t gone away
Thank you for the terrific editorial (“COVID complacency risks a bleak winter”, The Age, 21/5), hitting all the problematic COVID nails on their COVID heads.

What a shame there aren’t any giant billboards around to metaphorically shout your commentary from the rooftops to all those who seem to think COVID has gone away.
Claire Merry, Wantirna

Gay Alcorn sends an exclusive newsletter to subscribers each week. Sign up to receive her Note from the Editor.