At dusk one day this month, dozens of lorries registered in Lithuania, Poland and Romania were packed like giant sardines just off the M25. The truck stop for international drivers heading north from Dover was in a mud and gravel field around an old house converted into a cafe-cum-barber shop.

Russian was the common language as much as English. Among the drivers using the open-air showers or cooking over gas stoves was Yuri from Ukraine who had been living in his truck for six months, and felt forced to break EU safety rules on driving hours and rest. His paperwork showed he worked for a subcontractor and on this trip had been making deliveries to Amazon warehouses.

Calculating the pay to haulage drivers depends on complex rules about working and resting time. But for his latest journey involving an Amazon pickup and delivery, Yuri had been tied to his truck for more than 72 hours, and had crisscrossed the Channel. He said he would be paid just €63 (£57) for the leg of the trip from France to the UK.

A huge boom in internet ordering during the Covid-19 shutdown has created a surge in demand for contractors to move goods between e-commerce fulfilment centres. The pandemic has put huge strain on the global logistics system and resulted in an increase in the exploitation of non-EU drivers such as Yuri.

That is is the conclusion of a report by the Dutch trade union research foundation VNB, the International Transport Federation (ITF) and the International Union of Food Workers, whose investigators have spent months interviewing hundreds of drivers during the pandemic.

“Long before covid, the road transport industry in Europe was plagued by exploitation of drivers and human rights abuses,” said the general secretary of the ITF, Stephen Cotton. “The pandemic has exacerbated the abuse.”

While much of Europe has been in lockdown, drivers interviewed by the VNB have been crossing the continent for leading multinational companies and brands, either employed by small subcontractors at the bottom of complex supply chains, or working directly for some of the biggest transport companies in Europe.

The story of Yuri, who asked the Guardian not to use his real name for fear of retribution from his employer, which owes him money, echoes those of other HGV drivers and suggests a new business model is increasingly taking hold in the sector.

It involves haulage companies establishing their legal base in lower-wage areas of the EU, such as Lithuania or Poland, then recruiting drivers from even poorer countries outside the EU, such as Ukraine, Belarus, Uzbekistan, Turkey and the Philippines.

The drivers, enticed by promises of quick access to EU visas and generous salaries of around €2,000 a month, pay agents up to €1,000 for their jobs. They are then brought in minibuses from the east to drive lorries almost entirely in higher-wage countries in western Europe. The good salaries mostly fail to materialise, according to the union report.

Some Filipino drivers, contracted in Poland, told the union they had not been paid at all while driving in western Europe during the pandemic. Others were earning as little as nine cents per kilometre driven. The report also sheds light on lax inspections and enforcement.

The unions have found cases of false documentation supplied to some drivers to cheat auditors or mislead authorities if they are stopped and inspected. They have also received repeated allegations that some companies cheat the tachograph, the instrument in each truck that is supposed to record the driver’s location, working and rest times to safeguard the public.

In order to prove how easy it is to obtain false documentation in Ukraine, for example, the VNB union successfully obtained a photo driving licence in the country using the name of Angela Merkel and an image of the German chancellor. 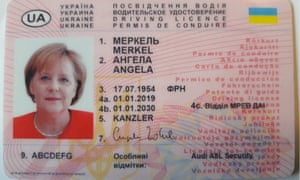 Yuri was contracted to a Lithuanian-registered haulage company. He said he had not had a proper rest period away from his truck as required by EU law for weeks. His company had said it could no longer afford to pay for overnight accommodation, so he was living in his truck 24/7. He was not only trucking to Amazon locations but also to other companies in western Europe.

“Tramping”, as the haulage industry calls it, is not necessarily illegal. HGV trucks are fitted with bunk beds behind the driver’s seat and drivers may sleep in them overnight. But the EU has strict rules on working and resting hours, and living in the cabin week after week is illegal.

The number of hours a driver can work without proper rest is also strictly regulated, to protect from dangerous driver fatigue. But Yuri said on his most recent run he worked 94 hours over two weeks, over the legal maximum. EU rules say drivers must have at least 11 consecutive hours rest in every 24; Yuri said he was repeatedly working 14-hour days.

Regulations also require drivers to be paid the minimum wages of the countries in which they actually spend their time working. But with much of the haulage industry’s usual work delivering to manufacturers having disappeared, competition between companies has become fiercer. Transport companies bid for work from well-known multinationals, then subcontract to other hauliers, who undercut others by employing non-EU drivers on illegal wages and conditions, the unions say.

Like other Ukrainian and Belarusian drivers to whom the Guardian talked, Yuri mostly cooked with a gas stove inside his trailer, or just beside it. He goes a week at a time without proper facilities for showering. “It’s hard to work like this when you haven’t seen your family for months.” His contract promised him the Lithuanian minimum wage plus a premium, and daily allowances, so that he expected to be getting between €700-1,000 a month. To date he said he had only ever received small amounts of money from the company of between €300-400 a month.

Amazon said it was unable to investigate allegations without more details about the case. “We work with a variety of haulier partners to get packages around our logistics network and these anonymous allegations in no way reflect the high standards we hold our partners to. All partners are required to comply with applicable laws and Amazon’s supplier code of conduct, which focuses on fair wages, benefits, appropriate working hours and compensation. We expect our partners to provide a great work experience and take immediate action if we find a partner is not complying with that expectation.”

Driving across Europe, non-EU drivers also get a feel for which countries have more rigorous checks and enforcement. France, Germany and Austria were known to be places where you might be stopped and fined for excessive driving hours, Yuri said, but not so much the UK, which he believed “closes its eyes”.